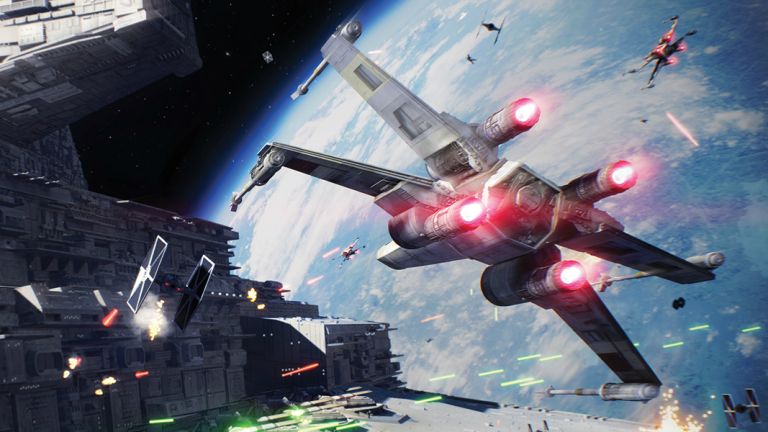 Missed all the big news from Gamescom 2017? Worry not, dear reader. We've collected together ten of the best and must-see trailers from Cologne so you can sit back and prepare for the next 12 months of gaming goodness...

With Destiny 2's release mere weeks away, Bungie and Activision used the show in Cologne to debut the MMO shooter's glitzy launch trailer. If the recent closed and open betas are anything to go by, the world on raids, sparrows and ridiculously named hand cannons is set to blow its monster predecessor out of the water. It arrives on PC, Xbox One and PS4 on 6 September.

Having spent a couple of games dabbling in science fiction, the grand city-building simulation of the Anno series if finally dialing back the clock. Specifically to the year 1800 and the dawn of the Industrial Revolution. German dev Blue Byte is back on coding duties, with a Winter 2018 pencilled in for PC.

Despite being delayed from this month until October, excitement continues to build for Middle-earth: Shadow Of War. The sequel to Shadow Of Mordor is upping the scale on everything, and that includes its monstrous enemies and mounts. The latest trailer shows off Mordor's bestial inhabitants, including drakes, trolls, the Balrog and a disturbingly attractive Shelob.

It's been well over a decade since the Jurassic licence last got a top-down, tycoon simulator with Operation Genesis, and the world of keeper-chomping dinos is back with another. Rollercoaster Tycoon developer Frontier is on board, so we're expecting the kind of slick, rewarding and faithful Jurassic Park game OG always wanted to be. It hits PS4, Xbox One and PC in summer 2018.

Another game on the precipice of release, FIFA 18 looks to be the most impressive and technically profound entry yet. The character models are some of the most ridiculously accurate we've ever seen (just look at Ronaldo's glorious mug), while pre-ordering will grant access three days early. It drops on PS4, Xbox One, PC, Switch and more on 29 September.

Having taken a year off to reassess its future following the visually impressive (yet ultimately forgettable) Need For Speed in 2015, the rubber-burning franchise is back and it's gone full Fast & Furious. Teamwork is name of the game this time round as you and you're crew channel your inner Vin to pull of high-speed heists a-plenty. It screeches onto Xbox One, PS4 and PC on 10 November.

When Microsoft announced it was helping remaster the original Age Of Empires to mark its 20th anniversary, we had a sneaking suspicion it was really trailing a much bigger reveal. Surprise! Not only is the series getting a brand new entry in Age Of Empires IV, but we're even getting remasters of the entire original as well. It's coming soon to PC only.

It's an AC blowout this year as Ubisoft drops not one, but TWO new trailers for the triumphant returning Assassin's Creed Origins. Another series to refresh itself with a two-year break, the Egyptian-set open-world murder sim showcases a new story trailer (complete with some badass new Assassins) and another glimpse into its revamped combat, stealth and exploration mechanics. It emerges from the shadows on 27 October for PC, Xbox One and PS4.

Things have been painfully quiet for Shenmue 3 since its ground-shaking reveal at E3 2015, but we've now got a glimpse of our first gameplay trailer. Director Yu Suzuki has a lot of work on hands updating such an iconic series, although that stiff facial animations do feel a dated compared to modern standards. Still, this game is a long way off completion, so let's just enjoy the fact it's still happening.

DICE has been hard at work on the follow up to 2015's excellent Star Wars Battlefront, and if this Gamescom trailer is anything to go by, its sequel is going to blow it to atoms. We're getting battles from across all three eras, with ships, troops and iconic characters all taking to the battlefield (and the skies/stars) in a multiplayer shooter like no other. It jumps to hyperspace on PS4, PC and Xbox One on 17 November.