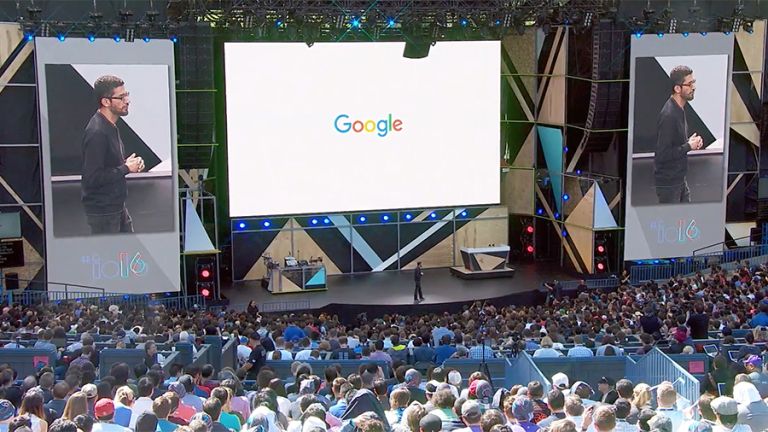 The first day of Google I/O 2016 was a very busy one, with the tech giant announcing all kinds of new hardware and software that we can't wait to try over the next few months. If you didn't catch the keynote then we've rounded up everything of importance here.

While Google I/O is essentially an event for developers, it does give the rest of us a tantalising peek into what Google has got planned for future versions of Android, Chrome OS and its various other products - here's are the key announcements so far.

Daydream is the VR component that's going to appear as part of Android N later this year (there's a set of minimum specs your phone will need to run it). Google has also set out a 'reference design' for a headset and remote control that it hopes will encourage its hardware partners to start building Gear VR-style devices for all Android phones... think Google Cardboard, but a lot more advanced.

Like Daydream is an upgrade for Cardboard, Google Assistant is an upgrade for Google Now: a more friendly, more personal, chatbot-powered AI that can answer your questions, book dinner reservations, play games and suggest smart replies to send your friends when you don't have the time or the energy to actually compose a proper message. It looks set to spread across all of Google's apps and services.

One place where the Google Assistant is definitely going to appear is in the dinky Google Home device - essentially Google's own version of the Amazon Echo (and Google chief Sundar Pichai even gave a shout out to Amazon on stage). It can answer your queries via the web, play music, control various smart home devices (including Nest) and it's coming out sometime in the autumn of 2016.

We'll also see Google Assistant in the company's brand new messaging app: Allo. Did Google need a new messaging app? Perhaps not, but Allo has chatbot-style AI capabilities, some nice stickers, and the ability to quickly change the font size with a slide of your finger. It looks a lot like this is going to be Google's answer to Apple's iMessage, and it links to your mobile number too.

Just for fun, Google launched yet another messaging app at I/O, this time for one-to-one video calls (yes, it's Google's FaceTime). It's called Duo and one of its neatest features is the ability to see a video feed of who's calling before you answer. Like Allo, Duo is going to be available in the summer for Android and iOS. Where does this leave Hangouts? To be honest, we're not exactly sure.

Google's smartwatch platform is getting a major update - like Android N and almost everything else announced at I/O, it's coming in the autumn. The update will enable Android Wear apps to run completely independently of a connected smartphone, plus there are three input upgrades - smart replies, handwriting recognition and a small, swipeable keyboard for your wrist. What's more, your smartwatch will be able to identify exercise activities automatically.

We already knew a lot about Android N, but there were some new features announced at I/O: background updates, for example, so Android will eventually update automatically in the same way the Chrome browser does. There's also going to be a quicker way of switching between apps, as well as a bigger range of emoji characters - which we know was something a lot of you were waiting for.

Also coming at some point later this year are Android Instant Apps - segments of apps that are temporarily installed on your phone. So, you can jump into a shopping app to buy an item, for example, or an app made by a particular venue or event without having to go through the trouble of installing the whole app and then uninstalling it five months later, never having used it again.

9. More Android in your car

Android Auto is slowly but surely getting better and more widely used, and Google announced some small upgrades at I/O this year. The Google-owned Waze app is going to be built into Android Auto, and there's going to be support for Wi-Fi connections as well as wired ones too. What's more, you'll be able to access Android Auto on your phone, without needing a compatible car headset as well.

Google's Dave Burke admitted that the company is having trouble naming Android N - and so everyone is invited to offer ideas via android.com/n. Before you get too excited, there's not going to be an official poll - Google's decision is still final - but there's a chance that your idea might be the one that's picked. Think dessert names and see where your imagination takes you... you've got until 8 June to make a suggestion.

Now why not check out Android Pay is finally in the UK: here's how to use it