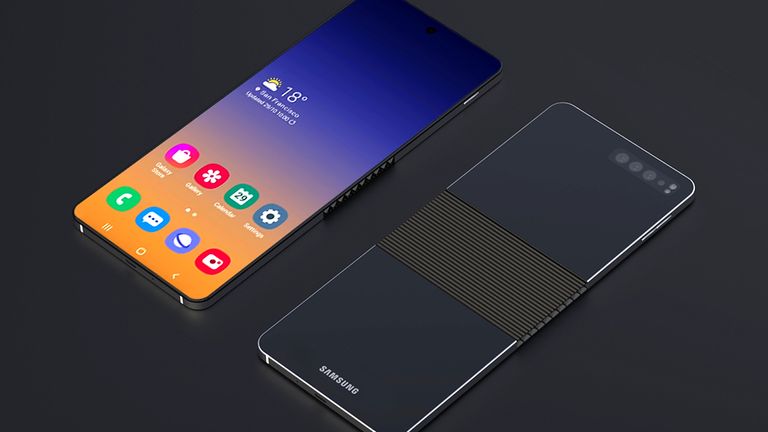 There's not long to go until we find out the truth behind Samsung's much-anticipated Z Flip, a clamshell folding phone set to rival the Motorola Razr. As we can see in these latest leaks, Samsung is hard at work on branding for the event⁠—but one leaked image could reveal more than it initially seems to.

Samsung Galaxy fansite SamMobile has uncovered a new image shared on Chinese social media site Weibo. The image is of either a triple-folding device or two regular clamshell folding phones placed together, under the legend "Galaxy Z". Casted remotely from a phone using Samsung DeX software, the device is set against a black background, which is juxtaposed by the glow of the phone's screens.

If accurate, this does indeed confirm Samsung is set to unveil a new range of phones known as the Galaxy Z Series, starting with the Z Flip, when the Korean smartphone manufacturer takes to the stage next month.

Based on the look of the branding, the Z Series will be Samsung's label for all its folding phones going forward, rather than basing the logo on a specific triple-folding device. Interestingly, Samsung does possess a patent for a triple-folding smartphone, first revealed in August 2019, which was crowned "The Z Fold" by some internet pundits. Check out a render of the design below:

However, we've seen prototypes and heard enough leaks about a clamshell release to be confident Samsung's new folding phone won't be triple-screened. We believe the "Z Series" logo is just branding for a new series of folding phones. The triple-screen Z Fold, if it does exist, is likely to come much later down the line.

Clearly inspired by phones such as the recently-relaunched Motorola Razr, Samsung Galaxy Z Flip is said to look less like a flip-phone of old and more like a conventional smartphone, that happens to fold in on itself. The prototype images, also circulated on Weibo, only add weight to these rumours.

We'll know more for sure once the live-stream of Samsung Galaxy Unpacked begins, but for now, we're betting the leaked image is a simple render or logo rather than the design of a new phone outright. However, if Samsung has managed to keep a secret for once and we're getting another new device, you certainly won't hear us complaining.