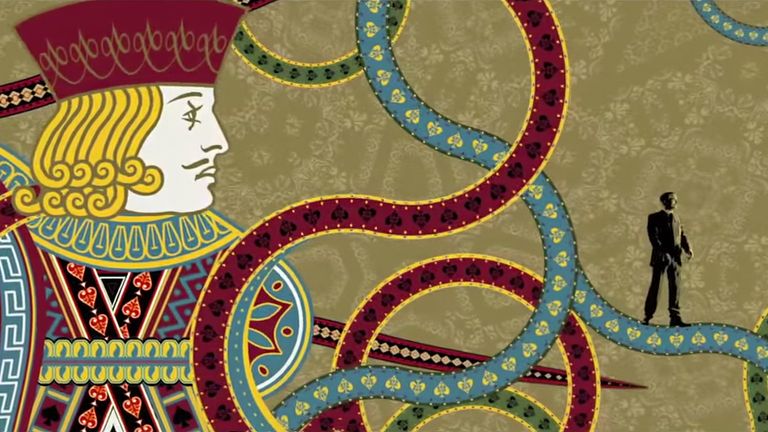 Danny Kleinman is a British director, famous for working on the opening title sequences of James Bond since 1995's GoldenEye. T3 caught up with him at Pinewood Studios to learn what it's like creating the iconic intros.

I started at art school, a friend of mine was just breaking into doing music videos. He was a clapper loader who used to borrow a camera at the weekend and go and film local bands.

I used to do some storyboards for him, and my fee was a curry. We'd go for a curry, he'd pay for the curry, and I'd do the storyboard. The end results were good, but not quite as I'd seen it in my mind, so I thought, 'Y'know what, I can do that.'

I learnt on the hoof, just doing it. Traditionally you work your way up through the camera department, I just went straight in as director.

Do you feel a lot of pressure? Because a lot of people see the Bond introduction as iconic.

There are certain elements of a Bond film that you can't take away. Then it just becomes another action film. It has to have certain elements to it, and the title sequence has become traditionally one of those things.

People look forward to seeing it and it does get analyzed afterwards, and the song becomes famous.

So, it's not that I feel pressure about it, but I definitely feel excitement. It's a challenge to make it feel part of the history, but be fresh as well. That's part of the challenge.

Do you have a favourite opening scene?

I suppose I still have a great soft spot for GoldenEye, because it's the first one I did.

I was so thrilled and excited to do it, I'm a Bond fan like most British blokes, I grew up with Bond and I had the bubblegum cards. Being part of the world of it was so exciting, being able to bring something fresh to the language of Bond, and seeing it projected at the Royal Albert Hall, that was fantastic.

Even though looking at it now, it's of its era, and probably technologically quite old fashioned, I still have a lot of warmth for it.

You've done quite a number of Bond title sequences, what is your process, and how long does it take you?

It's a pretty elongated process, because I need to get started on it early on. For instance, typically I read the script of the movie before it even starts filming, and due to the fact it takes quite a long time to work out things like who the song is going to be sung by, I get going with ideas and brainstorm with ideas which come from the script, and from the themes of the movie itself.

I have to be a fair bit down the line before I've even heard the song, so I have to be flexible there.

I don't work exclusively on the titles over a period of six to nine months, but it usually takes that amount of time. It's only the last three or four months, when the song gets tied down, then the main film may have just finished filming, so I can have access to Daniel Craig to film with him, then go hell for leather to get it finished before the film comes out.

I won't have any preconception about what I'm going to do until I've read the script and found out what the themes of the film are going to be.

That informs the narrative elements, and that's why my sequences are different to my predecessors. I've tried to bring in a bit more narrative to the sequence, there's some storytelling within it, perhaps more than has been in the past.

I think Maurice Binder in The Spy Who Loved Me, had a naked girl wearing a Russian hat, that was his narrative.

How has the technology changed from GoldenEye to Spectre?

The technology is literally like a change from fireworks to landing on the moon, it's enormous, gigantic.

The levels of what one can do in post production now, in GoldenEye I was limited by the number of images I could collage together. I was limited because it took so long and the resolution would degrade.

I also use computer animation, for instance, in Skyfall there's a gun that tumbles through the water as if it has fallen out of Bond's pocket. It sinks down to the bottom of a lake and embeds in the mud, that's all computer animated. It would be quite a difficult thing to film in reality.

How has the technology influenced the way you work?

It's a strange arc actually, because GoldenEye was created in a period where a lot of digital compositing was still very much in its infancy and the machines we used to do it was very slow.

So for instance if you were creating lots of layers, and you're putting it together, and it has to be done at full resolution, it can take hours just to make one frame.

So the only way it could be done was to create GoldenEye as an offline sequence, and by that I mean low-res digital images, that I could move around and place them, collage the things together, and end up with a sequence that then went to another set of people who copied it at much higher-res, which took absolutely ages.

It was a very laborious process, but weirdly it meant I could work quite fast, and it was intuitive.

Maybe ten years later the machines had got a lot faster, and to streamline the process, the offline element got taken away, I was working straight into the machines. But that I found very restrictive in terms of working spontaneously. So if I thought 'Okay, I want that image and that image to be together, but I want this one a little bit that way, early on I could just make the switch, later on I'd do it, but it took maybe an hour.

But nowadays, the computers and the processing is so fast it has come all the way back again, it can make changes reasonably easy and quite fast.

Are you nostalgic for the old ways of doing things?

No, I think most modern technology makes working easier. I love the look of film, it has a particular look, but I think only real experts or super-pedants would be able to tell the difference between a very well graded digital image and a film image.

And the difficulty of working in film, the extra expense rules it out.

I like working with digital technology because it's so instant. It's intuitive and spontaneous.

I guess if I did miss anything it would be the rigor, to say you only have a certain amount of time, which made you really focus on what you have to do. Whereas digital technology will allow you to shoot for hours.

That's what strikes me about a lot of you intros, you're quite early to adopt new technology, but also they're very varied, there's a mix…

Yep, I've been very lucky to be able to turn my hand to lots of different things, but my philosophy always is that the idea is king.

So the idea should suggest what techniques you use, the wrong way to go about it is to have a technique to start with, then try and find an idea to fit the technique. It should always be the other way around.

So that means in the past I have done very simple, even shot things on Super 8, but I also love new technology and I love playing with the machines and finding out what they can do and trying to stretch the boundaries of what's possible, but it's not for its own sake, it's always to enhance the concept.

Do you work closely with the director of the film?

It changes, obviously there have been quite a few directors over the time. Some are more involved than others. What you have to remember is that while I'm doing my bit, which is slightly autonomous, they're actually directing an entire movie. They physically can't be that hands on, but I want them to be involved, and I want the introduction to be right for their film.

And Sam Mendes is actually a director who gets more involved, he definitely has opinions, he provides input, and I'm very happy to have that because it's great having another pair of eyes on the work. He's a very clever man.

Do you have a large team?

It changes from film to film, on GoldenEye I sat with one editor and we did it in this offline way, five or six other people would do the technical side.

The filming part was a normal film crew with quite a lot of people. Nowadays in the post production side of things there are literally, maybe 100 people doing different things in different rooms. So for example, if you're creating a gun in CG, you have one guy doing the shape of the gun, sculpting it, another guy that puts the texture on it, another who lights it, one who makes it move, and all of those things have to come together to create a single thing.

Do you have a favorite piece of kit which you use while filming?

I find colour grading the images is so important, because it could completely change what the image looks like having a really great colour grade on it.

The difference it makes is beyond words, so having colour correction tools which are really excellent, and working with people who know what they're doing in that area, is vital.

I love doing that bit because the film suddenly looks quite different and gives a different vibe and atmosphere.

Do you have a favorite Bond actor?

I think they all bring something to it, they're always 'of their time'. You think, 'that was the right guy for that era.

I don't think Daniel Craig in the 80s would have been right. But I like what they've all brought to it, I even liked George Lazenby, I thought he was a good Bond. I don't have a favourite.

Is Daniel Craig good to work with?

Yeah, he's a really nice chap, and very motivated to make it good.

He wants to be good, he's not an actor who turns up on the day and says, 'what are we doing now? Okay, that's good enough, I'm going home.”

He really wants it to be good.

1. Film on at least two cameras, more if you can, you get better action cuts and can speed up the action in the edit.

2. Rehearse the action at half speed if possible so your camera operator can follow the action and the focus puller can get it sharp.

3. Safety is your first priority, double check that everyone is happy with their roles in the action and understands the cues.

5. Use the right kit – the majority of the Sony 'Made for Bond' campaign film was shot on Sony's F65 professional camera because high-quality images are essential for the feel of feature film action.