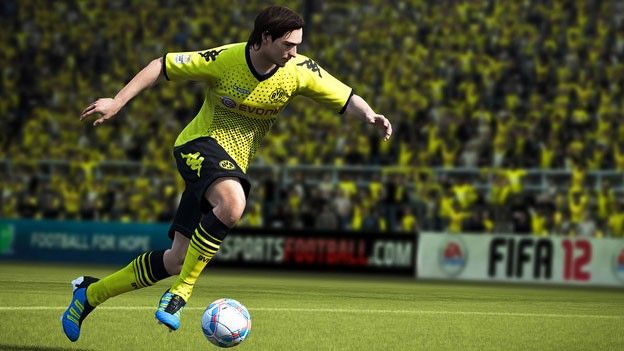 FIFA 13 news & rumours all rolled into one, including UK release date, potential ideas and a possible trailer expected to land in August

FIFA 12 may still be flying high in the games charts but what can we expect from the upcoming FIFA 13, rumoured to be landing in late 2012?

Since its release in September last year, FIFA 12 – the jewel in EA's crown - has won over both gaming nuts and critics alike.

Building on the success of its predecessors, FIFA 12 offered up some great new features such as the new defending system and the impact engine which, despite being marred by a series of problems (more on that later), was actually pretty good.

But will its successor offer us anything new? Here is a round up of all the latest news and rumours surrounding the launch of the upcoming FIFA.

Whether there will be a gap between the US and UK launches remains to be seen, however, precedent tells us that this could possibly be the case – usually around three to four days.

We're likely to see a FIFA 13 trailer in mid-August this year – around the same time the FIFA 12 trailer was officially released by EA.

We will post it here on this very website as and when it lands. Until then, check out the FIFA 12 video below:

While FIFA 13 rumours continue to spiral out of control, fanboys are wondering what changes and improvements the game will have.

So far EA have kept hush about the possible features FIFA 13 will land with, but the games giant has discussed the including of two new ingredients.

First up is the integration of FIFA 13 with PlayStation Move and Kinect. EA has confirmed that three of their sports titles will make full use of both systems for Xbox and PlayStation, with one of them being FIFA.

"What we've learnt over the years is building anything on a platform just for the sake of it doesn't make any sense," EA Sports' senior vice president of worldwide development, Andrew Wilson, said at E3 last year.

No details have emerged of how Sony's Move will be used in the game but one imagines it would work in a similar way to how Pro Evolution Soccer does on the Nintendo Wii, with motion-based gestures dictating players' movements.

The Kinect features, on the other hand, could possibly see gamers being able to take free kicks, penalties, corners and throw-ins, however, it's difficult to see how they'll replicate anything else in the game.

Watch this space for more info.

With FIFA Street being reinvented very successfully, EA have discussed the potential of some of the dribbling controls being implemented in FIFA 13, reports Eurogamer.

Not all of the mechanics, however, will be suitable. We're guessing EA will struggling in determining exactly just how it will implement the new controls into the upcoming kicker.

FIFA Street creative director Gary Paterson said "It's (FIFA Street dribbling engine) a very intuitive and elegant mechanic but it's not something you see too often in real football.

But maybe there are elements of it that can be shared and taken. It's something they're evaluating right now. I don't think any decisions have been made."

FIFA 12 was an awesome package but a series of bugs hidden between the cracks of the software has made us cringe in more ways than one.

EA would need to tackle these problems head on if they're to succeed in making FIFA 13 the gaming goliath many hope it will be.

The main improvement would need to be on the impact engine – the software that dictates players' movements.

This was in development for two years before it made its debut in FIFA 12 last year and, as is the case with any new software, there are improvements that need to be made and glitches to be fixed.

Simply search 'FIFA 12 fails' in YouTube and feast your eyes on a string of gaming foul-ups, from players moving fifty yards when they tackle each other to others losing their legs and literally hopping when they run.

Many FIFA 12 users complained that red cards were being dished out for minor collisions and tackles that cleanly won the ball.

Barcelona and Argentine leg-magician Lionel Messi will grace the cover of FIFA 13 this year.

The footballer signed a deal with EA last November to be the face of off-shoot kicker FIFA Street and the upcoming FIFA 13.

England striker Wayne Rooney is also expected to make an appearance, making FIFA 13 his fourth FIFA cover in the UK.

Arsenal midfielder Jack Wilshere, who was on the cover of FIFA 12 alongside Rooney, will be ditched, however, following an unfortunate injury-prone season.