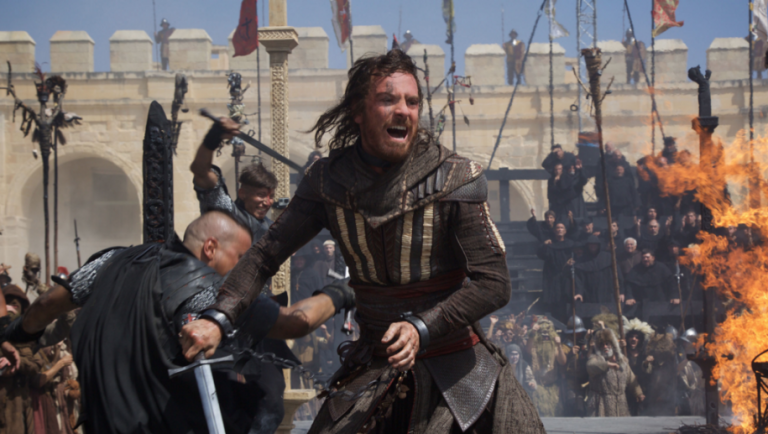 After plenty of teases with official images from its principal photography shoot, 20th Century Fox and Ubisoft are finally ready to give us a proper glimpse of Justin Kurzel's big screen adaption with its first official trailer.

We get to see Fassbender's modern day part, Callum Lynch, seemingly executed by lethal injection - only to wake up in the grasp of the Templars and Abstergo. The Animus has had a bit of pneumatic upgrade though - although it does give Fassbender and obligatory Superman landing at one point.

The bit we're most excited about, 15th century Spain, looks amazing. There's plenty of leaping across rooftops, standing pensive on said rooftops and a hint at a huge, full-scale battle. We get to see a teasing glimpse of Fassbender's Spanish Assassin, Aguilar de Nerha, launching from a cathedral. Leap of Faith style.

The trailer does feature a track by everyone's favourite attention seeker Kanye West, and fans have certainly had a mixed response to the addition of his music. We would have preferred something a little more classical rather than Kanye proclaiming 'I am a god', but hey, Kanye will be Kanye.

Assassin's Creed, which is set for release in December, also reunites director Justin Kurzel with stars Michael Fassbender and Marion Cotillard - the trio previously worked together on the excellent Macbeth adaptation that hit cinemas earlier in the year.

Why not check out: Treasure, tears and triumph: why you'll love Uncharted 4: A Thief's End