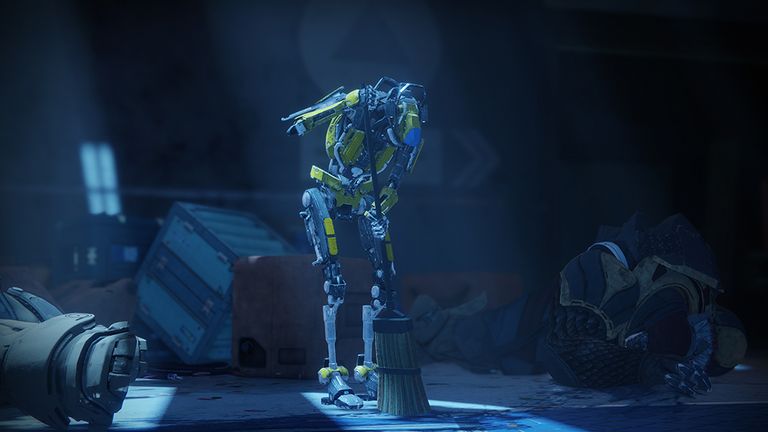 With the Destiny 2 beta open and the full game just months away, we thought it was about time we looked into the science of Bungie's sci-fi shooter.

Set in late 21st Century, the Destiny universe is dominated by a mysterious orb known only as The Traveller. It transformed the Solar System into a habitable network of terraformed planets and gave humanity the tech to spread amongst them, but the so called Golden Age was short lived. The Traveler is chased across the Universe by The Darkness, and civilisation was almost wiped out in an event known as the Collapse.

With the last vestiges of its power, the Traveller retreated to Earth where it created the Ghosts; robotic that motes can resurrect the dead, selecting the strongest souls to return as Guardians. These Guardians amassed beneath the depleted Traveler to build the Last City, and the Tower; the hub of the first game.

Set a year after the events of Destiny: Rise of Iron, Destiny 2 sees the Last City overwhelmed by Cabal forces, pushing the Guardians back and severing their connection to the Tower, and the Traveler.

The combat trailer for Destiny 2 points the finger firmly at the Cabal as the major aggressors, but it's their enslaved psychokinetic companions, the Psion,  that deserve all the attention here. We dug through psychokinetic science in our feature about Bethesda's Prey, and in Destiny 2, these mind-bending enemies are getting new upgraded abilities.

Mars is the easiest target; its atmosphere is painfully thin, but it's close and it's got water. All we need to do is warm it up, and if there's one thing humans are good at, it's creating atmospheric greenhouses.

There are a few different ways we could up the temperature on Mars, including using mirrors to increase the light level, or pelting the ground with greenhouse-gas laden asteroids, but our favourite was suggested earlier this year by NASA's Planetary Science Division Director.

He wants to build Mars a new magnetic shield.

Earth's core contains a molten iron dynamo that generates a magnetic field powerful enough to deflect solar wind, but Mars lost its equivalent 4.2 billion years ago. It used to be covered in water, but without its shield it's been reduced to a giant red dust bowl.

The artificial replacement would sit at Mars' L1 Lagrange point - a position in orbit where it could stay in a stable location between the red planet and the Sun. From there, the shield would form a magnetic bubble around the red planet, allowing the atmosphere to thicken.

So that's Mars sorted. Venus is going to take a bit more work. As it stands, it’s the hottest planet in the Solar System, it’s got 91 atmospheres of pressure, there's no oxygen, and acid rain pours from the sky. On the plus side though, it’s Earth-sized, and the ground is solid.

To live there, we'd need to reverse the planet's rampant greenhouse effect. Check out this video for a rundown of the ways we might be able to make that happen.

Destiny 2 is also set to take us to Saturn’s moon Titan and Jupiter’s moon Io. Both are in need of a little love if we're ever going to live there; Titan is a swamp of methane and ethane and Io spews sulphur and silicone and is pelted with radiation.

The trailer below gives us a sneak peek at the new locations, and both look pretty hostile, but Universe Today have us covered with their definitive guide to terraforming everything.

The arrival of the Traveler supercharged humanity’s technological capabilities. Human lifespans were extended, people spread across the Solar System and they set up two critical research facilities: the Ishtar Academy on Venus and Clovis Bray on Mars.

Own Solar System is a demilitarised zone, protected by the Outer Space Treaty of 1966. But, in the Destiny universe, nowhere is off limits and there's some serious weaponry in orbit.

With the best minds in the Solar System competing to developing new tech, humanity came up with two massive military advances: the Exos and the Warminds. We’ve had a look at android tech before, but the Warminds are powerful AI designed to protect the Solar System from attack, and that got us thinking about Nikola Tesla.

The Warminds, including Rasputin and Charlemagne are part of a Planetary Defence Network that controlled thousands of weaponised satellites, or 'Warsats' from Destiny’s Golden Age.

The network itself is reminiscent of Cold War early warning systems, including the infamous Soviet Woodpecker that now sits abandoned in the shadow of the Chernobyl nuclear power plant.

The 'teleforce' is a hypothetical electromagnetic weapon that was supposed to shoot streams of particles to knock aircraft out of the sky. Tesla claimed that he'd built and tested it, but he died in 1943 and it never materialised. At least, until recently.

The military now have access to 'Laser Weapon Systems', which use mirrors and lasers to focus blinding and burning streams of photons. Sounds like exactly the kind of tech that might power Destiny's Golden Gun.

Destiny 2 will see us face off against some familiar faces, including the Cabal, the Vex, the Hive and the Fallen. And, when it comes to science, it's the Vex that caught our eye.

They look like mechs to the casual observer, but beneath their suits they're actually made of liquid. The Vex are a white goo called radiolaria, and this happens to be a real scientific term.

Radiolaria are microscopic organisms with strange geometric skeletons made from silica - or glass. They've been around since animals first started to appear in the early Cambrian, and though most species are now extinct, they still exist in seas all over the world. Some live alone, and others group together to form vast colonies.

It's group-living that the Vex seem to favour, and they take it one step further. They've lost their individuality to become a collective mind with some powerful abilities.

Like colonies of bacteria and some social insects, the Vex seem to be capable of quorum sensing, which allows organisms to co-ordinate their decision making through unseen chemical signals. And these signals seem to reach farther than just the Vex colonies themselves.

The longer you spend in contact with the Vex, the more of a grip they get over you. Guardians can be infected, and in Destiny vanilla, the Vault of Glass dropped Vex kit; spend too much time with them and you start to become them. Take a look at this.

To top it off, the Vex can teleport across the Solar System using a system of warp gates. We dig in to faster than light travel in our Science of Mass Effect feature, but to unwrap the physics further, take a look at Stephen Hawking's lecture on Space and Time Warps.

Welcome to a world without light

Ultimately, Destiny comes down to the age old battle between light and dark. And that battle is playing out right now in our own universe.

Second law of thermodynamics explains that ‘everything tends towards chaos’; in an isolated system (like the universe), entropy (or disorder) increases over time. Eventually, at the heat death of the universe, all energy will be distributed in a uniform soup; there will be no stars, no planets, no us, and it will be cold and dark and eternally disordered.

Darkness is the spectre that will eventually snuff everything out, but, for the briefest of moments, life is fighting back. With energy from starlight, living organisms bring order to the chaos, building our molecules into the most complex of structures and keeping them that way for decades at a time.

In the Destiny universe, the Traveller is using light to extend human capabilities even further. No wonder the Darkness has been chasing it down.

If you can't wait to play the Destiny 2 beta is available now, and the full game will be with us on September 6th.