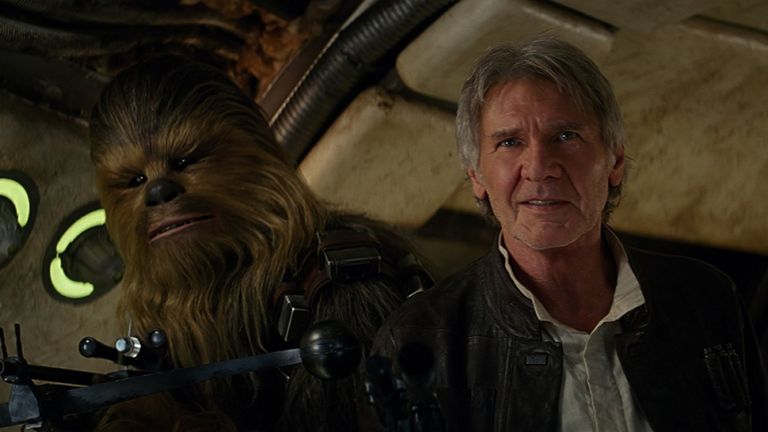 Note: spoilers for these films follow. Do not read on if you do not want plot points for these movies revealed!

With Star Wars Episode VIII, The Last Jedi now out in cinemas, Christmas 2017 is the perfect time to rewatch all the previous films at home. The obvious option is to queue them up in chronological order, especially if you've booked in to see the new one as well.

However, if you don't have time for all the films, or you want a slightly varied approach to the order, here we've ranked the existing movies from worst to best - a list you'll most probably disagree with, but it might help you pick the right ones for a family session.

8. Attack Of The Clones

The entire prequel trilogy of films isn't much liked by critics or fans, and with many a good reason, but the dishonour of coming in last place has to go to Episode II, Attack Of The Clones, released back in 2002. It's not completely terrible, but it's not much good either.

As with The Phantom Menace, there's too much political dialogue and not enough deep space battling, and the budding relationship between Anakin and Padmé has to be one of the least convincing romances ever committed to screen - all stilted conversation and sunlit meadows where you can almost feel the green screens.

There's a lot of walking and talking, and meetings, and the clone and droid army plots are just too confusing for a sci-fi blockbuster movie to handle. What's more, most of the high-grade talent, including Ewan McGregor and Samuel L. Jackson, look like they're doing a local panto.

It's watchable, just about - but only if you have to.

If you were too young at the time, or not around at all, you might not realise the sense of hype there was in 1999 when The Phantom Menace was about to be unleashed upon the world - here was a brand new Star Wars movie, made by George Lucas, some 16 years after The Return of the Jedi.

The special effects were upgraded, the star power was there, but a lot of the Star Wars magic was missing - perhaps due to the ponderous plot, which is dominated by political wrangling and a shopping trip for hyperdrive parts. The big-name actors are a bit of a misfire as well, because you just keep remembering how good they've been in other films.

It's not all bad, because the pod race is fun, and Darth Maul is suitably sinister, and we'd say it just about edges out Attack Of The Clones into last place; but after so much build up and anticipation, The Phantom Menace was a disappointing letdown when it first came out, and hasn't aged well since.

If you want to be a completist, include this in your festive viewing, otherwise we'd recommend skipping it.

6. The Revenge Of The Sith

Not a fantastic film by any stretch of the imagination, but at least something actually happens beyond political scheming and awkward romantic picnics in meadows (see above). For the first time in the prequels we actually get a proper dose of running, jumping and lightsaber fighting.

The appearance, right at the end, of one of the series' most charismatic villains certainly helps the film of course, as well as the anticipation of it, and the likes of Natalie Portman and Hayden Christensen look like they're starting to get a handle on what they're actually supposed to be doing here. It hints at a depth that the first two prequels don't have.

It still can't complete with the original trilogy in terms of its impact, and there are plenty of weak points too - the corny dialogue makes an unwelcome reappearance - but Revenge of the Sith salvaged a bit of respect for the prequel trilogy.

Now you've winced your way through the first three films, if you're still awake then it's time to get on to the good stuff.

The Force Awakens gets a lot right, and is perhaps better than could have been expected considering the crushing disappointment that was The Phantom Menace. It mixes old characters we know and love with a more modern way of filmmaking, and JJ Abrams and his team deserve a lot of credit for that.

It's bright, it's entertaining, and it clips along at a fair old pace, which are all ingredients you want from a Star Wars movie. The Millennium Falcon rides are an obvious highlight, as is the big X-Wing attack on Takodana, and there's enough variety and humour here to set it way above anything that happened in the prequels. What a difference 10 years makes in computer-generated graphics as well.

If we have to nitpick, we'd say the beats of the story follow the beats of Episode IV just a bit too closely, and the film does tend to rely too much on the iconic characters and spaceships of previous films to get a reaction from the audience. And another massive planet-destroying space base? Again?

The Force Awakens feels like proper Star Wars, and suggests The Last Jedi will be a hit too.

As good as The Force Awakens is, it does feel as if we've seen it all before to some extent, which isn't a criticism you could level at Rogue One - this film isn't perfect either, but it's a refreshing new take on the Star Wars universe, and scores a lot of points for taking risks the other movies don't.

Considering we know more or less how everything turns out right from the beginning, there's a genuine sense of threat and suspense as we enter the final, climactic scenes - some of the most chaotic, dramatic, and nerve-shredding scenes in the whole franchise. Felicity Jones and Ben Mendelsohn are perfect in their roles, and we even get a new droid who isn't a straight rip-off of something that's gone before.

And that's key to the success of Rogue One - it has brand new characters and a brand new tone and yet still feels like part of the Star Wars universe. It stands on its own two feet more than The Force Awakens, though being a spin-off that's pretty much obligatory.

That's all the films made in recent years taken care of - now it's back to the original trilogy.

3. The Empire Strikes Back

Ooo - controversial. The general consensus is that TESB is the best Star Wars film, and yet here we are, recklessly putting it in third place as if 40 years of critical appraisal never happened. But we have our reasons, and like to be different anyway.

To begin with, we love The Empire Strikes Back: it's a powerful blockbuster of a Star Wars movie, with romance (Han and Leia), boot camps (Luke and Yoda), huge lumbering AT-AT walkers, and of course the big battle and the big reveal that happens between Luke and Darth Vader at Cloud City.

It's a great Star Wars movie, but for us it's not the greatest - sections of it tend to drag, in the swamps and on Cloud City, there's no huge space battle to revel in, and the bad guys are on top for so much of the film that watching it is rather a deflating experience. Even best buddies Han and Lando turn on each other. It has that twist of course - but it's only in this film's successor that we get confirmation of it from Yoda.

The Empire Strikes Back is fantastic, of course. But there are two Star Wars films we prefer.

What makes A New Hope so special is the sense of mystery and promise and wonder as we meet all of these iconic characters for the first time. Luke is just a farmer's kid, Obi-Wan is just a mysterious cave-dweller, and C-3PO and R2-D2 are just robots.

The tropes of the story are as old as cinema itself, but George Lucas manages to make them fresh and engaging again, thanks in part to the way the story is told through the eyes of C-3PO and R2-D2. And it all builds so well and so naturally, as the scope of the plot widens and widens to that brilliant finale.

We even get the death of a major character in a way that's seriously unsettling, and of course some smart hints about what's to come (and what's gone before) in this tale of good against evil. Seeing all these characters meet and grow to know each other is still as entertaining as ever, and that's even before you get to the epic space set pieces.

One of the most important films in cinema history, and you can see why.

1. Return Of The Jedi

Look, if you want The Empire Strikes Back in first place, just go and read pretty much any other Star Wars film ranking on the web, but it's not getting top spot in our list. Instead we're going for the climax to the original trilogy, Return Of The Jedi, which a lot of people will tell you is the worst of the first three movies. But what do they know?

There are so many scenes to enjoy here: Luke going full-on Jedi to help his friends escape from the clutches of Jabba the Hutt, Admiral Ackbar realising "it's a trap!", Luke coming face to face with the Emperor and Vader, one last visit to Yoda, the speeder bike chase through the forest, and of course Lando blowing up the second Death Star in the Millennium Falcon. And there's even some redemption at the end.

It's got heart, humour, epic lightsaber duels, emotional pull and a satisfying resolution that is actually a resolution (take note, TESB fans). The main reservation most people seem to have about ROTJ is the Ewoks, but they serve a purpose, add an extra layer to the film, and look a lot more reasonable in a Star Wars universe that also has Jar Jar Binks in it.

Finish up your Star Wars watching binge with Return Of The Jedi and you'll end on a proper party atmosphere... just in time for The Last Jedi.