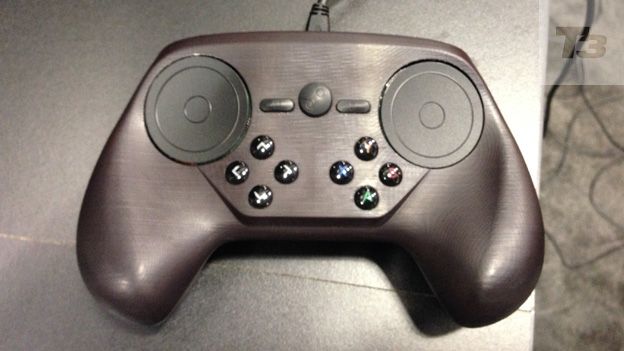 With Portal and Left 4 Dead developer Valve having reinvigorated and essentially dominated PC gaming over the last ten years with its Steam software platform, the Bellevue firm's Steam Machines is now attempting to do the same with hardware.

These licensed set-tops are souped-up, multi-tiered gaming PCs that meet Valve's specification standards and run the Linux-based SteamOS operating system. Rolling out now from a variety of manufacturers, the Machines attempt to simplify the cards and driver-driven world of PC gaming, bringing it fully to the masses.

Yet while Xbox One, PS4 and various third-party joypads work fine and dandy with the new Steam boxes, Valve has also been working on its own controller, a reimagining of the standard two-stick interface we've become accustomed to that strives for something better.

In typical Valve fashion, this involves much conversation with its thriving community, taking the views of developers and gamers themselves on board during a long-running prototype iteration process to shape the ideal input.

The pad had already traded the planned touch-screen for a central button set at CES (see gallery), but an all-new version was revealed at the Game Developers Conference in San Francisco that shifted the setup again, and T3 went hands-on with the updated Valve Steam Cotroller to see how it's shaping up.

In a nice techy twist, this latest prototype was 3D-printed only days prior to our trial, specifically for the GDC gaming expo. This proof of concept is by no means the final design or even base material and as such the chassis feels unfinished and fairly cheap to the touch. That said, it's incredibly ergonomic, fitting your hand nicely and thrusting the two haptic discs to the centre of the party.

These discs are the two most noticeable excursions from typical joypads. Sitting up top, looking like two huge eyes judging your every move, they appear identical to the naked eye, yet when their slightly concave surfaces are in contact with your thumbs they operate in very different ways.

Sliding your digits over them, the left is more a partitioned control stick in sheep's clothing underneath and acts as the main control input. The two inner rings signify a dead zone (in the centre), standard character movement (the middle ring) and sprinting/accelerating (the outer ring).

The right disc, however, is more like a high-tech, miniaturised version of those trackballs you used to get on iffy golf games in pubs, controlling your view on a first-person shooter, for example, through constant, well-judged contact, sliding around slickly, buzzing palpable feedback as it goes. The idea is to reduce the fatigue felt by duration players when dual sticks are having to be manipulated to extremes constantly.

Unfortunately, the pad's focus on these discs mean all the action buttons - four arrow directionals (not a D-pad) on the left and four classic action buttons on the right - are below the controls, in much the same way as the Nintento Wii U's various controllers. The centre then has a home and two menu buttons, as is increasingly the norm.

Though not the cosiest of control setups for those indoctrinated to Xbox and PlayStation pads, as you're inherently used to either both control sticks being below or them split between top and bottom; it's also a fair distance from the top of the control disc to the buttons, leading to mis-presses initially when the action hots up.

However, there's a heavier focus on the shoulder buttons and triggers on each side as your primary input, which are simultaneously analogue and digital. As you press down gradually they have degrees of analogue control, but then if you hit the final point there's a new digital pay off; so you can accelerate in a racing game but have a nitro fired up and waiting when it's fully pressed.

There's also an extra input, dubbed the 'rear guard', which is effectively a button spread across the reverse of the controller and up either side of the hand grip. You press it by simply gripping your fists tighter to create an action, be it jumping or, particularly satisfying, a melee attack.

Of course, the very nature of Steam and Valve's open approach means none of this is fixed, and all can be changed in the software. The idea is for you to tinker away and save your favourite setups before sharing them with the community, which will build an archive of best-practice configurations.

We used the Steam controller on four different games running on stock Valve development Steam Machines. Valve's own Portal 2 was the only one running native SDK controls designed specifically for it, so unsurprisingly played the most fluidly. The controls, while still taking a while to get used to, certainly seemed to do what we asked, at least.

Jumping with the rear guard was instinctive, and negated the other action buttons' awkward distance, while the combination of left and right haptic discs was responsive at a slower pace than we'd usually like.

The buzz of feedback on the right disc works well, giving you consistent tactile updates on your control (or increasing lack of) that's very different to rumble, and the pad is certainly comfortable in the hand.

However, it's hard to get away from the fact that it's not particularly intuitive - you're going to have to want to learn how to use it. Indeed, the difference in the way the two discs operate feels, to quote our sister website CVG's US editor Mike Jackson, like patting your head and rubbing your stomach. It really didn't come naturally to us at all, but with the promise of vastly improved results once mastered, you can see why you'd persist.

Broken Age's fairly basic commands fared OK, using legacy controls mimicking the input of mouse and keyboard, but Towerfall Ascension suffered from hefty input lag and the onscreen character seemingly moving when you didn't want them to. The slightest of movement sent us careering under a descending platform; we looked around and it wasn't just us, either, the whole party looked a bit miffed.

The nadir of our incompetence, though, was Dirt 3, a racing game where we didn't get to race so much as smash into beautiful looking advertising hoardings, again and again. Try as we might, we just couldn't stay on course, the minute we rolled our thumb over the right stick our viewing angle careering all over the shop. This requires a level of subtlety and nuance on a different scale than we're used to.

Again, we're more than happy to accept it was just our general ineptitude, but when we passed the controller to the next player, hanging back to assess their superior handling, they seemed to suffer in much the same way - and they were a game developer. Valve, in typical fashion, were hoovering up feedback from the show floor, no complaint deemed a wrong answer.

The Valve Steam controller is without doubt attempting another evolutionary step in the control cycle, like the joystick to D-pad and D-pad to dual analogue sticks before it, and as such can seem a bit of a shock to the system. This isn't a slight tweak, it's a totally new way of playing, with all the frustration/reward boom-bust that you would expect.

As such, short periods of gaming at a conference don't do it a lot of justice; this is a pad, once defined, that you're going to have to spend time with, calibrate, refine the settings and throw yourself into. Gaming pros who like modding their setups and playing for hours on end will certainly find something worth exploring here, and seeing Valve employees' impressive efforts with it, we yearn to replicate them.

Yet despite its attempts to popularise PC gaming at a time when hardware sales are down, the Steam Machine proposition remains, to our mind, a core one, a line of products aimed at gaming pros and those who like refining and customising their experience - which is what PCs do anyway.

Likewise, the Steam controller so far follows the same line, and as such we wonder whether it will end up being more a peripheral bought by the PC hardcore than a new input type for the masses. That said, it wasn't really that long ago we had one hand gripped around a clicky Interface II joystick, the other smacking big red buttons to play games.

Control will always evolve, and it's exciting that Valve is trying to prompt another sea change, bringing mouse subtleties to a gamepad in an all new way, even if we're not sure we're quite ready for it yet. We look forward to trying it in the comfort of our own office, not in the harsh open lights of a trade-show floor.