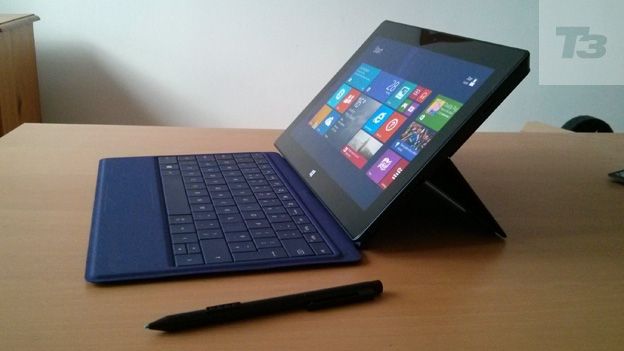 The Microsoft Surface Pro 2 is a tablet/laptop hybrid that also has a stylus, making it one of the most versatile devices around

What with slate PCs now selling for as little as £49, tablets have well and truly entered the mainstream. But with the Microsoft Surface Pro 2, the brand is taking a different tack. It's a tablet that turns into a laptop with the help of a detachable keyboard that doubles as a cover. It comes with a stylus, and there's enough grunt under the bonnet to shame most desktop PCs.

As you can imagine, it's not cheap.

But in trying to do it all, has Microsoft made a Jack of all trades and master of none? Let's find out.

In tablet terms, the new Surface Pro 2 will be going head to head with the likes of the iPad Air, Samsung Galaxy Note 10.1 and the new Nokia Lumia 2520.

Make no mistake, this thing is heavy. It weighs 900g, which is actually 12g less than the original Microsoft Surface Pro, and almost twice as much as the new iPad Air. Though that's understandable, when you consider it's more powerful than a lot of desktops. But either way, you're going to notice this in your bag.

It's well-built though, with a satisfyingly solid feel. The detachable keyboard, stylus and charging cable all clip on using a magnetic connection, which is quite neat, and the Surface logo doubles as a home button.

We tested it with the Type Cover 2, which costs an extra £110, but you can opt for the Surface Touch Cover which is a bit cheaper, at £65. These come in a range of colours, while the device itself comes in any hue as long as it's black.

One change from the original is the kickstand on the back. It now flips out at two angles instead of just one, so you can position it perfectly.

Of course, a device is only as good as its software. The feather in the cap of the Microsoft Surface Pro 2 is Windows 8.1 - a recent update to the software.

It's not massively different from Windows 8, but there are some tweaks. Microsoft has brought back the Start button in the desktop view (the OS is split into tile mode and a more traditional desktop mode).

Tiles come in more sizes than on Windows 8, more colour options, and there's a new screen below the tile view that houses all your apps. You can open up to four apps at once, and see all of them on-screen at the same time.

In all, it's a nicely tidied-up operating system, but it's more of an incremental update than something entirely new. But that's no bad thing.

It's far from perfect though. Plenty of big-name apps are still missing (like iPlayer, Spotify, and Gmail). The pricing is also a bit skewiff. Angry Birds Space is £2.59 on the Windows Store, while it's just 69p on both iOS and Android. It's only 79p on Windows Phone as well.

A stylus comes in the box, and while it may be a bit of a novelty, it's great fun, taking notes in OneNote or doodling in Fresh Paint. When drawing, the harder you press, the thicker the lines get, so it's perfect for showing off your artistic flair as well. Not that we had any. It's way more versatile and fun to use than the S Pen that comes with the Samsung Galaxy Note 3. Take note, Samsung.

The display is the same size (10.6 inches) as the original Microsoft Surface Pro and the Microsoft Surface 2, but it's a ClearType Full HD display with 10-point multitouch. It has the same 1,920 x 1,080-pixel resolution as well, giving it a pixel per inch count of 208ppi.

That's less than the iPad Air and the iPad Mini with Retina display. The Microsoft Surface Pro 2 is bigger than both of these as well, showing up all the imperfections, so it won't look great next to either. But on its own it's a nice bright, clear screen that movies and games really pop from.

Now this is where it really shines. The Intel Core i5 processor and 4GB of RAM mean it's ridiculously fast. The device starts up in under five seconds, which is phenomenal. Apps, games and films are handled with aplomb, with no slowdown or juddering.

There are three ways to use the Microsoft Surface Pro 2 as well. You can prod the touchscreen, use the stylus, or clip on a keyboard and use the mouse trackpad.

The Microsoft Type Cover 2 keyboard is great for typing, with shallow keys like on an Apple iMac, and they're nicely spaced out, and backlit too, which is handy in dimly-lit rooms. The trackpad isn't fantastic though, as not every click registered.

The only real letdown hardware-wise is the rear camera, with the resulting grainy textures not likely to win any awards.

Microsoft promises 75 per cent more battery life with this model, claiming up to eight hours of use, and between seven and 15 days in standby. We got somewhere between six and seven hours out of an afternoon's web browsing, video watching and game playing. Which isn't bad for a tablet, and is very respectable for a laptop.

The Microsoft Surface Pro 2 is an impressively versatile gadget that leaves most tablets eating its dust in terms of sheer power. It's not quite the do-it-all device Microsoft would like though. Instead it falls between two camps. Anyone craving this much power is going to want a bigger screen - in laptop mode, text is too small for comfortable reading. But as a tablet, it's just too heavy to lug around.

And then there's the price. The Microsoft Surface Pro 2 starts at £719 for the 64GB model we tested, and goes up to £1,439 for the 512GB model. That makes the iPad look cheap. The stylus comes free, but you'll have to shell out another £110 for the Type Cover 2 keyboard we tested it with.

If you don't want a separate laptop and tablet, want a lot of power, and think your back's up to it, the Microsoft Surface Pro 2 is for you. The only thing is, we can't imagine that's a lot of people.