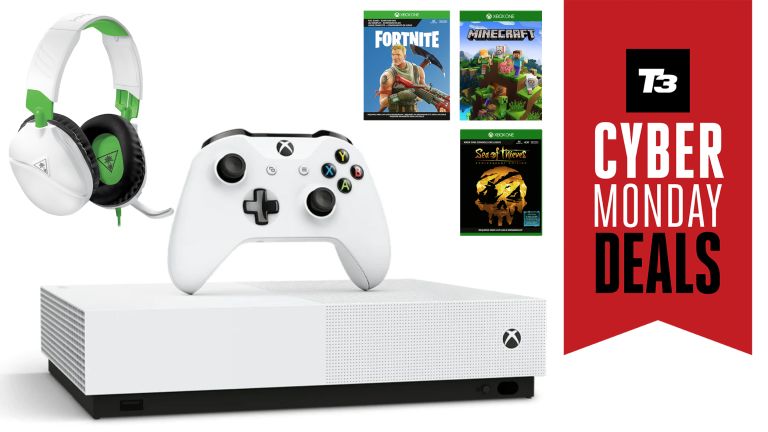 Cyber Monday is delivering some truly outstanding gaming deals right now and, one of the absolute best we've seen in terms of value, is this Xbox One S All-Digital Edition bundle deal.

Available right now over at Amazon, the bundle delivers the Xbox One S All-Digital Edition, a Turtle Beach Recon 70X White Gaming Headset, and three games (Minecraft, Sea of Thieves and Fortnite) for only £139.99.

That's hours of top gaming, a slim and beautifully designed console, as well as a top gaming headset with mic to use while playing, in one incredibly affordable Cyber Monday package.

Xbox One S All-Digital Edition | Turtle Beach Recon 70X | Fortnite | Minecraft | Sea of Thieves | £139.99 | Available now at Amazon
For anyone looking for a fantastic all-round gaming package that lets you get stuck into the fantastic gaming world the Xbox One has to offer for a low cost then this bundle deal on the All-Digital Edition console is well worth considering. Its price, at just £139.99, is stupidly low thanks to Cyber Monday, while the bundle itself includes the Turtle Beach Recon 70X White Gaming Headset and three games to play out of the box. Free delivery is included.View Deal

Microsoft has got a really impressive range of Xbox One consoles, ranging from the 4K powerhouse that is the Xbox One X, which is the world's most powerful console, through the 4K Blu-ray packing Xbox One S, and onto the digital gaming brilliance of the Xbox One S All-Digital Edition.

We think this deal is ideal for casual gamers as a primary console, or hardcore gamers as a secondary console, as it delivers buckets of gaming value for cheap. For those that would prefer to pick up a new Xbox One console on its own, though, then be sure to check out the very best Cyber Monday prices on them below: