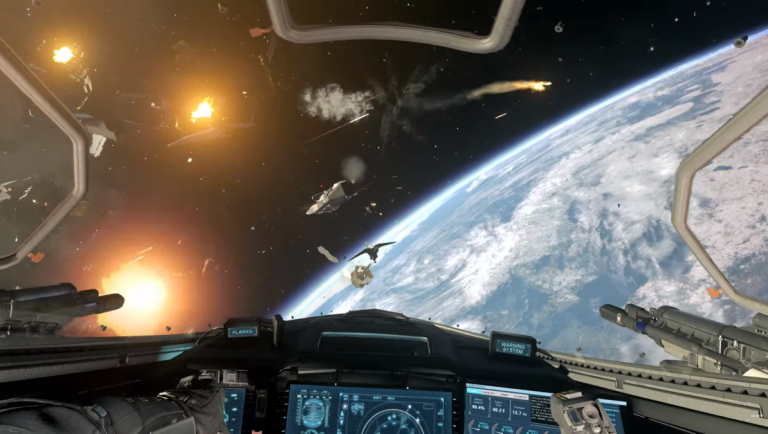 After a veritable supply drop of rumours and leaked promotional images, Activision and Infinity Ward have finally yanked the tarpaulin of its 2016 offering, Call of Duty: Infinite Warfare, with a revealing debut trailer. Space! Other planets! Robots!

This first offering of in-game footage proves Infinity Ward has finally pulled the trigger it and the rest of the CoD developer cabal have been flirting with since Black Ops 2 in 2012: full on science fiction action. We see fighter jets powering into space before engaging in Battlestar Galactica-esque battles and what looks suspiciously like landscape of a distinct un-Earthly palor.

"With Call of Duty: Infinite Warfare, we are taking Call of Duty to places fans have never experienced in the series,” says Dave Stohl, studio head of Infinity Ward. “On one hand, this game is the kind of gritty, boots on the ground, visceral war story that Call of Duty is known for. On the other, its future setting takes players on a journey of epic scale and proportions, providing incredible gameplay innovations and new experiences for our fans. This is a grand scale, old-school, all-out war in an epic new-school setting. And it's going to be a hell of a lot of fun.”

Considering both 2014's Advanced Warfare and last year's Black Ops 3 have gone full on futuristic with robots, bioaugmentations and Matrix-style drones the jump to proper science fiction doesn't quite pack the punch I might have had a few years ago, but with this being in the hands of series creators IW we're at least hopeful for a CoD that doesn't stray too far into Planetside or Halo territory.

Elsewhere, IW has confirmed that current-gen upgrade Modern Warfare Remastered will not be available for purchase on its own - if you want to return to the likes of All Ghillied Up you'll need to invest in the Legacy Edition or the deluxe digital versions. We also know now developer Raven (which has worked on the series for years in one capacity or another) will be looking after the remaster and will be using dedicated servers to support MW's much loved multiplayer.

Call of Duty: Infinite Warfare arrives on PS4, Xbox One and PC on 4 November.

Why not check out: Get building in virtual reality as Minecraft comes to Gear VR