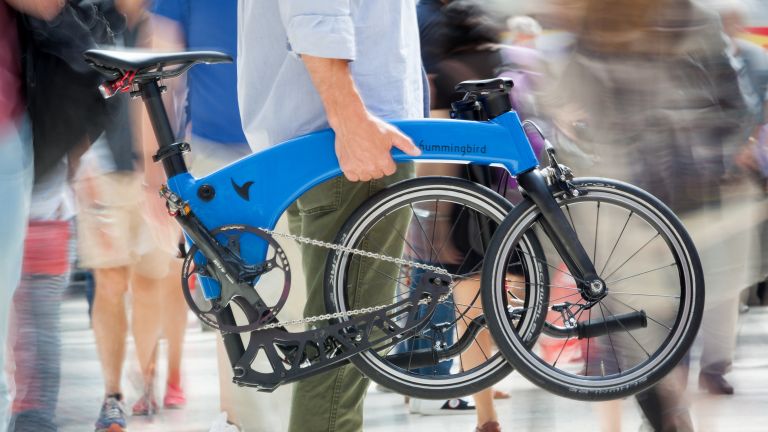 Brompton bikes are the archetypal commuter bike due to their ability to fold into a reasonably portable size. But, event the lightest Brompton weights a hefty 9.6kg, making it difficult to lug around.

Enter the Hummingbird Bike Company, another British brand looking to take the crown from Brompton.

The Hummingbird is the world's lightest folding bike, weighing just 6.9kg, and boasting a similar three-step folding system to Brompton. According to Hummingbird it takes just five seconds to collapse the bike once you get the hang of it (we never got the hang of it, so it took closer to 30 seconds).

How is it so light we hear you ask? The Hummingbird is made from carbon fibre, engineered by Prodrive and produced in the same precision workshop where they make world championship-winning race and rally cars.

As the frame doesn't fold (rather, the wheels, handle bars, and seat), the folded package isn't quite as compact as a Brompton. The reduced weight makes up for it, however.

Check out the folding mechanism below:

As well as being functional, the Hummingbird looks great as well. We tested the black model and it looked menacing - it got a lot of attention.

The frame is available in three other colours, Hummingbird Yellow, Freedom Blue or Burnt Orange. Each is individually numbered, and features the option of a single speed or four speed gear box.

We tested the single speed box and found it was really well set up.

The bikes are manufactured in Prodrive's Milton Keynes workshop. You can see how it's produced below:

The Hummingbird starts at £3,495, so it clearly sits at the the more premium end of the market, but there really has been no expense spared in designing the ultimate product for the urban cyclist.