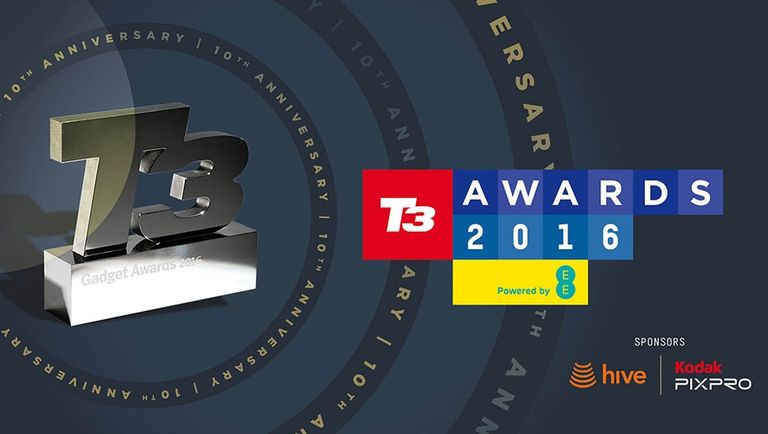 What are the T3 Awards?

Celebrating its tenth anniversary this year, the T3 Awards is known as “the Oscars of Tech,” and not only by us. Indeed, a T3 Award hasbecome one of the most prestigious prizes in the industry, given only to the greatest gadgets, the best brands and the most innovative, er, innovators.

Attendees on the night will be given a souveneir copy of the T3 Awards 2016 magazine - which will be in shops on Friday!

Samsung is this year's most nominated company with an incredible 11 nods. Apple and Sony/Sony PlayStation pick up six each, and go mano-a-mano-a-mano with Samsung for Phone and Brand of the Year.

Other notable nominees include HTC, who receive five, and Microsoft and LG, who both have four.

How each award is decided

The winners are decided by your votes (voting now closed) and those of a panel of expert judges from the tech biz, and the results will be announced this Wednesday.

The exception to this is our Gadget of the Decade award, which is completely voted for by you as well as our awards for Tech Legend, Outstanding Contribution, Tech Personality, Hall of Fame and Editors' Choice. These are awarded by the T3.com and T3 magazine teams.

The categories in this year's T3 Awards powered by EE

The shortlists for this year's T3 Awards powered by EE

Gadget of the Year

Gaming Product of the Year

Phone of the Year

TV of the Year

Streaming service of the Year

Laptop of the Year

Camera of the Year

Brand of the Year

Connected Home Tech of the Year

Design of the Year

Audio product of the Year

Innovation of the Year

Wearable of the Year

Car of the Year

Check out all of last year's winners