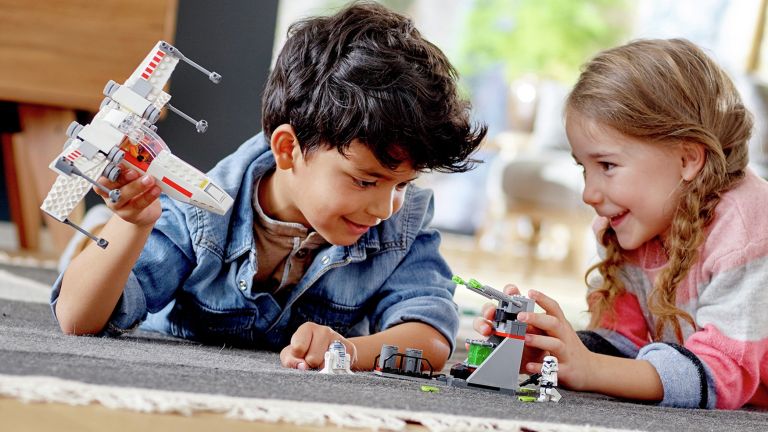 This week's Lego deal from Argos takes a nice chunk off the price of a load of popular sets, including some great playsets from Lego Star Wars, plus the eternally popular Lego Ninjago and Lego Creator 3-in-1 sets.

It comes just in time for half term, and there's stuff made for a range of ages, including in the new Lego Junior range, which are made to be buildable for kids age 4+.

We've picked out our favourites from the sale below, but you can see the full range, including other toys that are on-sale, here.

Lego Star Wars X-Wing Starfighter | Now £63.99 | Was £79.99
Save £16 off the most famous Star Wars ship! What else do you need to know? Oh fine, it has opening and closing wings, and comes with two sets of pilots: Luke and R2-D2, plus Biggs Darklighter and his droid. It also shoots lasers and missiles, and looks fab.View Deal

Lego Ninjago Stormbringer | Now £23.99 | Was £29.99
With four minigifures, opening jaws with lightning shooters, and a swiping tail, this dragon is ready for battle – a removable saddle and reins means he can be ridden or just head off on his own.View Deal

Lego Creator Pirate Roller Coaster 3-in-1 | Now £55.99 | Was £69.99
One of our favourite Lego sets on the market right now, this lets you a pirate-themed coaster that's got lots of neat aesthetic touches, and a working coaster track, of course. You can turn into three different rides, including the main big coaster, or smaller alternative tracked rides with extra other buildings. It's a really cool build, and quite a creative set.View Deal

Lego Star Wars Death Star Escape | Now £19.99 | Was £24.99
Luke and Leia swing their way to SAVINGS with this really fun set of their escape through the Death Star's corridors. When closed, it creates a bridge they can run over, while a Stormtrooper keeps watch. Open it to create a chasm. There's a rope to wring on, and opening and closing door, too.View Deal

Lego Ninjago The Golden Dragon | Now £13.99 | Was £17.99
Recreate the final battle of the Ninjago Masters of Spinjitzu with the Golden Dragon, which has posable legs, wings and tail, plus an opening mouth with stud shooters. It comes with three minifigures, too.View Deal

Lego Star Wars Yoda's Hut | Now £20.49 | Was £25.99
A great gift for Empire Strikes Back fans, both the inside and outside of Yoda's home really capture the feeling from the movie. You get Yoda and Luke with it, of course, and some play areas so you can recreate the gruelling Jedi training.View Deal

Lego Creator Shuttle Transporter, Helicopter & Car | Now £19.99 | Was £24.99
There are three really fun builds here: the star of the show is the truck that carries a space shuttle (complete with little satellite), but we're also fond of the smaller truck that carries a helicopter, and the car and trailer combo ready for a summer holiday.View Deal

Lego Star Wars Junior X-Wing | Now £19.99 | Was £24.99
This simple-to-build set is designed especially so that younger kids can get in on the building action, though it's fun for slightly older too, thanks to the fact that it builds a little playset of the trench run, as you dodge laser blasts from the turret (which fires discs). It comes with Luke, R2-D2 and a Stormtrooper, too.View Deal