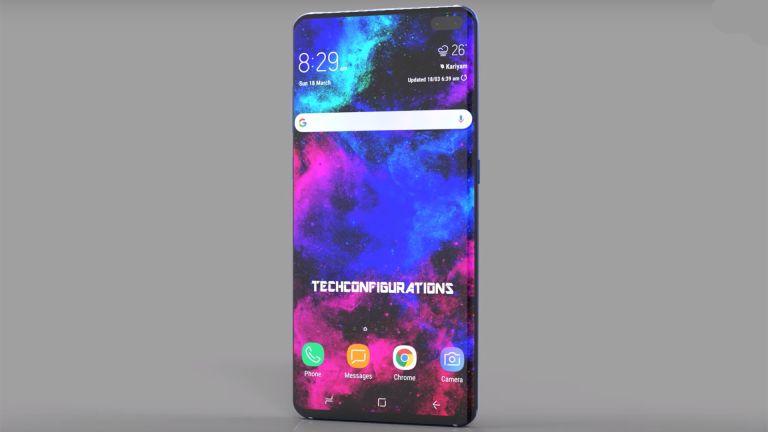 While the Samsung Galaxy S10 has had lots of its details leaked, the likely more impressive Galaxy S10 Plus has taken a backseat – until now. New renders have shown off just what the super-sized Samsung flagship smartphone could look like, complete with dual front-facing cameras.

The new look at the Samsung Galaxy S10 Plus comes compliments of render specialist TechConfigurations which has created a full 360-degree video. Check it out below to see the concept handset from all angles.

As you can see that dual front-facing camera looks amazing with the Infinity-O style screen which leaves the cameras floating in the display. That also means the 6.4–inch QHD AMOLED screen can run edge-to-edge without any bezel for maximum screen size.

The camera greatness continues on the rear where there is a quad lens system with flash. There's no fingerprint reader in sight though, since this should come with Samsung's newly developed under-screen ultrasonic fingerprint reader.

The video also reveals leaked potential specs like the Snapdragon 855 or Exynos  9820 CPU backed by up to 8GB of RAM and 512GB storage.

There should also be 5G on at least one of the S10 handsets, most likely this top-end Plus model. So expect a huge battery to also come in this phone so it can keep up with all those high-speed data transfers.

The handset look fantastic and is likely very close to the real thing, which we should see unveiled at the start of 2019, potentially as early as January at CES.