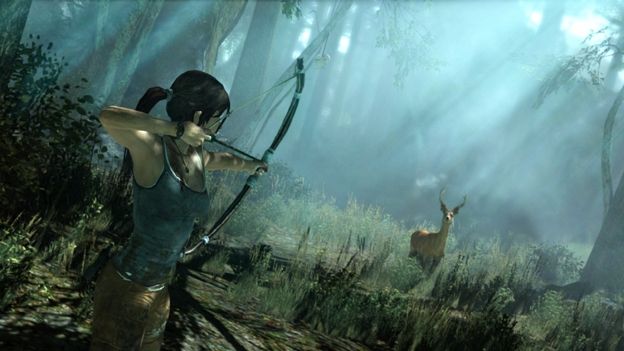 A new Tomb Raider E3 2012 gameplay trailer shows the fruit of two year's work starting with Lara Croft shipwrecked on a mysterious tropical island and awakening in a dark cave, suspended by her feet.

Very much the 'Batman Begins' of the video game world, American Developer 'Crystal Dynamics' has been set the daunting task of re-building the most recognisable computer generated heroine from the ground-up.

Still as resourceful as she was when the franchise began in 1997, Croft manages to escape but not without injury or having to confront the corpse of another shipwrecked passenger strung up in a ritualistic pose.

Read more: Shadow of the Tomb Raider review: is Lara's latest adventure a hidden treasure or a broken relic?

Players must keep the beautiful English archaeologist alive as she faces wild animals, other survivors and the tropical paradise's deadly inhabitants.

If they do, then they will be rewarded with the evolution of a scared, fragile woman as she becomes the hardened, fearless tomb raider we all know and love.

Cinematic and packed with some interesting action set-pieces the trailer shows Lara Croft climbing an abandoned plane fuselage, fighting wolves, hunting with a handmade bow, falling from waterfalls, getting to grips with a gun and finally leaping and tumbling in a breathless chase from the burning wreck of a plane's engine.

It is impressive and whets the appetite for the March 5th 2013 release date.

Square Enix has confirmed the game will be available for PC, Xbox 360 and Playstation 3. However, with E3 allowing Nintendo to flaunt its impressive new hardware which supports many third-party, hardcore games – could an adaptation of this title be planned for the Wii U?