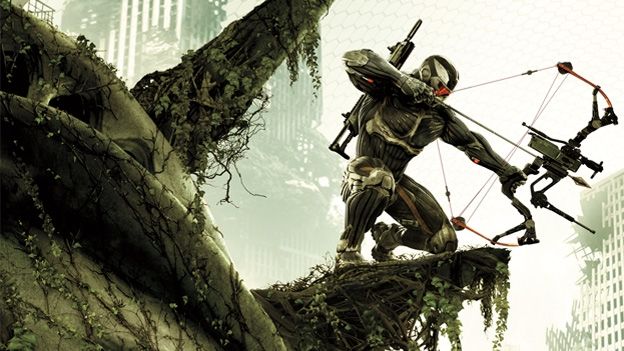 Crysis 3 is the fourth game from CryTek and EA and looks set to be the most visually stunning title yet with the CryENGINE 3 graphics engine setting the bar for both consoles and PCs.

Crytek has unveiled the brand-new gameplay trailer for Crysis 3 showing off both the incredible new visuals and some of the new weapons you'll be able to use in the game.

It also showcases the completely destroyed landscape that is New York under the oppression of the nanodome.

Newly announced is the Crysis 3: Hunter Edition will be more focused on multiplayer giving players early access to the Bow weapon that has featured so prominently in the press images.

You'll also get early unlocks of a number of multiplayer bonuses included suit enhancements and weapons.

Crysis 3 has an official UK release date of Spring 2013, with the game coming to Xbox 360, PS3 and PC. Interestingly if this is to remain consistent it also rules out the arrival of the Xbox 720 and Sony PS4 before these dates confirming that we won't be seeing the next-gen consoles until at least the middle of next year.

What we know so far is that the game will again be set in New York however it won't be the gleaming metropolis that players were so used too in Crysis 2.

Time has clearly passed and the city has now been engulfed in a giant nanodome, erected by the corrupt Cell Corporation.

By erecting these domes Cell plan to imprison alien race, The Ceph and then study them in their quest for global domination. Of course this has been hidden under the guise of 'protecting' the populace of the USA.

Things don't work out as planned however and both the Ceph and Cell Corporation find themselves in a whole world of trouble as you decide to go all 'Predator' and bring out one of the coolest looking weapons we've seen in a while.

What we do know is that Prophet, while caught inbetween this epic battle will begin to see some changes in the suit, after having been Ceph influenced so substantially this starts to affect both the suit and the way that the Ceph behave towards him.

It's believed that the game will essentially be a revenge story, focusing on the main character Prophet who is out to get Cell Corporation for what they've done to both the people of New York and his squadmates.

Little else is known about how this will effect Prophet, whether he will succeed or if indeed Cell Corporation are the biggest of his problems.

The game will be set in the nanodome of New York and will contain seven key areas, or 'seven wonders' as CryTek are calling them.

Essentially a city in tatters, New York has been taken over not only by the Ceph but also by nature and so within the dome, swamps, rivers and jungle environments will be commonplace.

It's known that the game will feature heavily on the ideas of stealth and tactics with the bow being the sharp end of that gameplay style. Allowing you to see the shot in 'arrow cam' the player is able to watch the flight of the arrow as it speeds its way towards the target.

One of the new features is the ability to hack objects, whether it's turrets or other objects, letting you turn Ceph and Cell weaponry back on its owners while also enabling you a brief period of time to creep back into the shadows.

The melee cam has been given a rework as well letting you creep up being targets and then bring them down with brutal effeciency, it's both over the top and stunning to watch.

First up is the Composite Bow, while little is know about its true capabilities it is clear that the bow will play an important role, especially in an environment that is more like a jungle than it is a city.

Next up is the Typhoon Assault Rifle, revealed via CVG, this 500 rounds per minute behemoth is capable of literally coating a target in rounds making it one of the most effective mid-range weapons of the game.

Coming early to multiplayer gamers who have the Stalker Pack and available in-game the semi-automatic Jackal tactical shotgun is both a superb room-clearer but also comes with a silencer attachment for those quieter close-range kills.

Finally there is the Feline submachine gun, featuring a devastating rate of fire and a 60 round magazine this close-range weapon comes with the Predator Pack and features exclusive camo to make you even less visible.