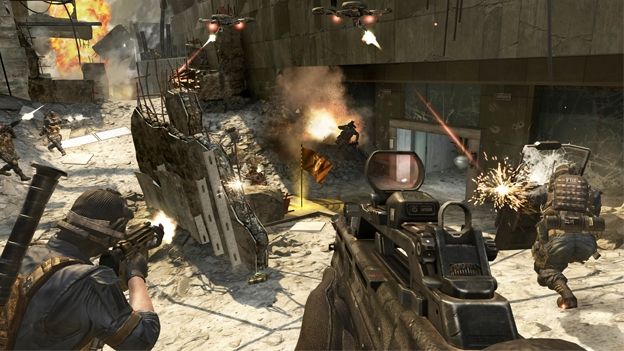 Call Of Duty: Black Op 2's Multiplayer has been revealed ahead of the opening of the Gamescom videogames expo in Cologne

Check out our preview of Call of Duty: Black Ops 2 here.

Instead of having to fill up a set of equipment and perk slots, players can now use 10 ability points to assign assets and weapons however they choose. There's also a new list of Wildcard slots they can purchase to add weapon attachments, extra grenades and double up on perks from the same category.

Kill Streaks have been replaced with Score Streaks, allowing players to unlock battle rewards by stringing together 'positive play' moves that aren't limited to (but do include) game kills. New rewards include The Guardian, a microwave emitting turret that slows enemies, the HellStorm, a multi-headed ballistic missile and the AGR, a four legged armoured tank sporting twin cannons.

The biggest addition to the multiplayer mode focuses on eSports. Treyarch have added League Play to the mode, which allows players to compete online in ranked matches. Treyarch have also included a set of sportscasting tools so that player can 'CODcast' on all the action, using various HUD toggles, map displays and the ability to drop in and out of player conversations.

Call Of Duty: Black Ops 2 is one of this year's most highly anticipated titles. It's released on the 13 of November, later this year.

We've got our hands on these images to whet your appetite: