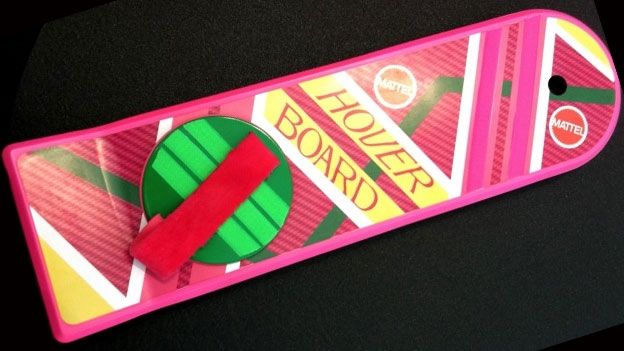 Making the long awaited jump from the big screen to the realms of reality, toy manufacturer Mattel has announced it is to release the BTTF Hoverboard

Forget the iPad 3 and the Samsung Galaxy S3, the world's most coveted gadget, the hoverboard from Back to the Future is set to enter the realms of reality thanks to toy manufacturer Mattel.

Ridden by Marty McFly in the 80's flicks, the newly unveiled Mattel Back to the Future Hoverboard is set to 'glide' over most surfaces later this year with the product's manufacturer warning potential customers that, unlike in the film, the device “does not work on water.”

“Finally! This totally awesome 1:1 replica of the hover board from the BTTF 2 and BTTF 3 films includes multiple whooshing sounds and will glide over most surfaces (does not actually "hover" – check back in 2015 for that feature),” the official Mattel announcement has confirmed.

Mattel Back to the Future Hoverboard Release Date

Following last year's arrival of the Back to the Future Nike Mag trainers, Mattel has confirmed the hoverboard will land in 2012 with a pre-Christmas release to follow a period of pre-orders.

“We'll be taking orders for it March 1 – March 20, 2012, and the final product will be shipped around November/December 2012,” the toy manufacturer said. “Because this is such a high-cost item, there will be a minimum number of orders required to go into production. If we don't receive the minimum orders, [we] won't go into production and customers will not be charged. The price will be announced later this month.”

If the hoverboard the ultimate fantasy gadget? Let us know your most wanted mythical device via the T3 Twitter and Facebook feeds.