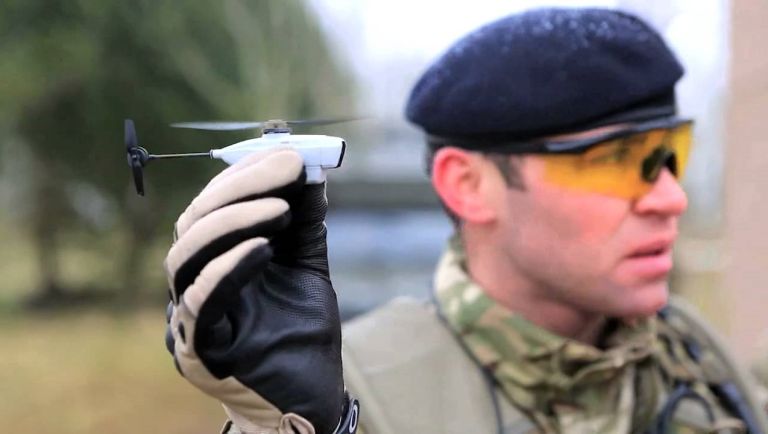 Here, in the world commercial technology, we're hardly stuck for new and exciting gadgets tailored to every conceivable facet of our lives. Self-driving cars? Check. Immersive, viable VR? Double check. Medical advances that helping the blind see and the deaf hear again? All the checks. But there's still a part of us that wants what we can't have - all those amazing bits of tech bubbling away behind private, military doors…

We've shied away from weapon-based advances - because hey, outside of a videogame we certainly don't need fancy peashooters in our everyday lives - but we have collated some of the best alternatives from crazy transport to miniature drones.

Today, mobile networks are stronger than ever. We've got 4G coverage spreading throughout the country and more Wi-Fi hotspots than we can handle in cities and towns with a big enough populus. Sadly, it's not quite the same across the entire nation, especially for those of us living in more remote locales - so what if you could have a powerful blanket of coverage wherever you are, regardless of your location? That's where US defence contractor DARPA's Mobile Hotspots program comes in.

Designed for use by the US Army, the Mobile Hotspots initiative is all about providing their soldiers with an active replacement for the usual mobile 'ad hoc' networks currently used to communicate in the field. If successful, the scheme would use a fleet of UAV drones that would provide gigabit per second coverage across the world, offering advanced tracking that's simply unheard of in the commercial sector.

Drones are big business in the commercial sector now, no longer bound to military test ranges and instalments in the Call of Duty franchise. With stronger, more stable flight and extra intuitive controls, those flying gizmos have become the new in-vogue home of GoPros everywhere. But that's not to say the military has abandoned the faithful drone - far from it.

In fact, the military remains a hotbed for new drone developments including the pursuit of mini or micro versions. It might sound a little reductive to try and slim down a drone's size, but when it comes to intelligence operations and reconnaissance, smaller tech is ideal. The US Army is currently testing out the Black Hornet Nano, a 4 by 1-inch flying gizmo designed by Norwegian firm Prox Dynamics. It weighs a mere 0.04 Ibs. It comes complete with thermal imaging and a range of 0.6 miles, making it ideal for stealth ops.

Okay, so this technology might sound like something firmly rooted in the pages and celluloid reels of science fiction, but it's actually the basis for a real technology currently in development by the military. One that, if proved successful, could change the very nature of how we communicate.

Okay, that might sound a tad hyperbolic, but it's a really fascinating bleeding edge technology that's slowly popping up in different places. At this stage, we've not quite reached the realm of reading thoughts as words and images, but we're edging closer to the ability to interpret changes in brainwave patterns. A team of researchers at the University of California San Diego campus have been working on a headset that monitors the EEG (electroencephalogram) on a smaller form factor. For the military, the tech would enable it to monitor a pilot or driver's mental state and ensure they're awake enough to perform their duties.

Now this is one really exciting bit of technology that you certainly won't find on shelves at your local electronics retailer, but not doesn't stop us dreaming about being able to buy one! Currently in development in a joint program consisting of DARPA, South Korea's Seoul National University, Harvard University and MIT, the meshworm is one fascinating contraption. Imagine a robot that can inch along like an earthworm and change its shape to suit different scenarios. Now imagine it can slither into enemy territory, taking readings and data while remaining so resilient it can withstand being stood on or hit. That's the meshworm.

For those researchers, basing the design on the slow, inching movement of an worm (known as peristalsis) was chosen to avoid the need to mimic human or animal movements. They've also used a synthetic fibrous material that essentially renders the meshworm near-invincible, making it perfect for messy ops.

Transforming vehicles aren't just the stuff of Hasbro toy lines and Michael Bay film travesties - back in 2012, Japanese JS Robotics actually built a car that actually transforms into a robot and we've been seeing more and more crazy takes on the transformable car popping across the world. Sadly, we all can't go out and buy a car that, say, turns into a helicopter, but that doesn't mean there's not one in development in military circles.

Say hello to the Transformer (TX), a tactical vehicle designed to go from an off-road buggy to a bona fide whirly bird. Created in conjunction with DARPA, Lockhead Martin Skunk Works and Piasecki Aircraft (the contractor behind the X-49A Speedhawk compound helicopter), the Transformer is a concept design focused on creating a 1-4 person vehicle that can be outfitted in the field to go from ground vehicle to a fully operational VTOL (Vertical Take-Off and Landing) craft in moments.

Armour of the future

If there's one thing that occupies the armies of the world more than arming their infantry for action, it's ensuring they're protected with armour suited to the warzones of today and tomorrow. And it's not just bullets and blades these armours need to combat - it's everything from fire resistance to concussive impacts and its pushing military development teams into overdrive.

One such design is the Tactical Assault Light Operator Suit (TALOS), a form of exoskeleton that protects the user from bullet impacts, while offering increased strength and the power to monitor vitals remotely. It's certainly an eye-opening attempt to bring concepts from science-fiction into reality, but it's far from the most impressive. Our old friends DARPA are currently working on a 'liquid armour' design that goes from a liquid state to solid when an electrical current is sent through it. According to the team working on it, it could provide vital support to limbs and joints making it potentially ideal for physiotherapy and injury recovery.