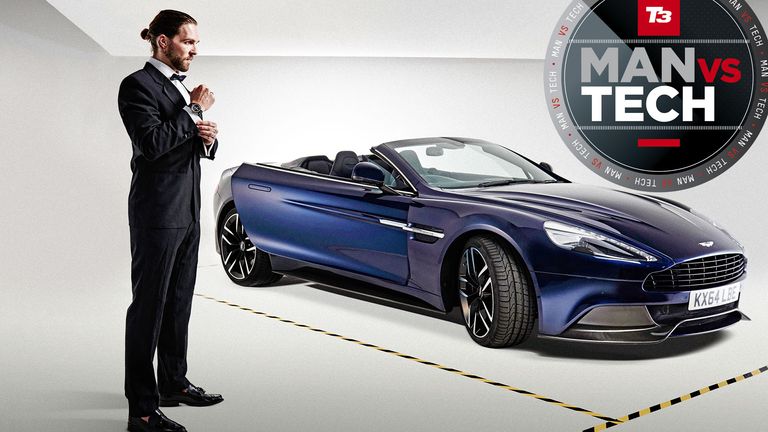 Who wouldn't relish the opportunity to be the coolest super-spy ever? No one, that's who! Which has got me thinking… The chances of the Bond producers giving me a call and asking me to become a hipster Bond are, well, non-existent. But if I wanted to be Bond for the day – if I really, really wanted to – how would I go about it?

First things first. I already have a smoking-hot wife, so that's my Bond girl taken care of, and I own a tux, a bow tie and a pocket square, so I've got the image sorted, too – even if it's slightly more hirsute than MI6 is traditionally used to. What I lack is appropriate accessories. Without my own personal Q to hand over the gadgets when needed, I'll have to go out and source my own.

So, where to start? A spy pen, obviously. Commander Bond has used a litany of pens throughout his career. Think Never Say Never Again's explosive version in 1983 – used to dispatch the hilariously named Fatima Blush – and Ben Wilshaw's “What did you expect, an exploding pen?” quip in the more recent Skyfall.

I don't want to get hold of a pen that might be considered a weapon, but there's a host of them out there with features that would've been utter fantasy in Sean Connery's era. So instead, I track down the thumbsUp! Spy Pen, which discreetly takes still photos and can record video (with audio) as you write. If a pen is a little cheesy for you, you can also get a super-small Mini DV camera for video and sound that can be stashed just about anywhere.

A Bond film wouldn't be a Bond film without a shadowy super-villain to track down. So in lieu of a real baddie, I enlist T3 editor Rob to fulfil the role of henchman, and fit a GPS tracker to his newly acquired MINI JCW (without his knowledge). It works remarkably well when hooked up to Bond's new phone of choice, the Sony Xperia Z5 Spectre Edition, and I manage to covertly track him all the way to the local McDonald's drive-thru. I'm not sure Blofeld will be getting such a tawdry delivery from Mr Hinx in Spectre, but let's wait and see.

I also manage to track Rob's progress back to his villainous lair – AKA T3 HQ – with a drone. The DJI Phantom 2 Quadcopter is remarkably good fun to pilot, and seems like the perfect gadget for a spy to have knocking about for low-level recon. It's worryingly easy to spot, mind – the perfect target for a well-aimed, blade-brimmed bowler hat. That said, Rob doesn't spot it, so the drone makes it onto my expanding 00-list.

Next up, something no self-respecting gentleman should be without: a great watch. For this particular mission, I have to forget an Apple Watch, Android Wear or Pebble, and focus on my Bond game. In Spectre, 007 has opted for a more classic style, with an Omega Seamaster 300 on an awesomely cool NATO strap. Omega has been Bond's marque of choice since 1995's GoldenEye, and this limited-edition watch is being restricted to just 7,007 examples (see what they did there?), each one featuring its series number. With a brushed buckle and strap keepers engraved with the 007 gun logo, you couldn't get more on (Bond) brand if you tried.

Next, a truly lustworthy Bond-spec car – after all, no spy worth his salt would be seen driving just any car. Sadly, you can't go out and buy the Aston Martin DB10 that Bond drives in Spectre, because Aston made it specifically for the film as a kind of showcase-meets-design-intent for future models, and built just ten of them (I ask, but they won't let me have one. Spoilsports). But according to some well-placed sources, the DB10 does point the way for the AM Vantage replacement due in 2017, so keep your cheque book to hand.

So for now, at least, I'm left with only one real choice. It has to be an Aston – there's a 50-year history of Aston Martin/ Bond partnerships, after all – and it has to be the best one I can get my hands on – which, happily, is the current range-topping Vanquish Volante. I soon realise that I haven't set myself up to experience being Bond for the day, but rather to get the chance to sit behind the wheel of a 6.0-litre, V12 feat of gorgeousness. I head straight home to collect my Bond bombshell wife so we can cruise about, show off and suck up the glamour that comes as standard.

Now, I'll be up front with you: I'm not earning the kind of money that enables me to drop five quid shy of £200k on a supercar, despite the obvious benefits that come with owning such a beautiful thing. I am, however, exceptionally good at blagging stuff, so if you've got your charm down right, you could walk into an Aston Martin showroom and sort yourself out with a test drive, at the very least. You'd need the right look, though. And some proper accessories, naturally…

With my original mission in mind, I conclude that you can forget fancy gadgets. All you actually need to feel like James Bond is an Aston Martin. How you go about getting your hands on one is another matter entirely.

The spies who snubbed me…

In real life, I'd have no way of making it into the ranks of even MI6's domestic cousin MI5, simply on account of my tattoos – this precludes me from blending in, apparently. And if you haven't got a driving licence then don't bother applying – even if you do have one, the chances of you getting behind the wheel of an Aston Martin are close to zero.

Still fancy yourself as an undercover agent? Back in January, MI5 launched an online game to attract new recruits, which you can play to see if you'd make the (virtual) cut and find out more about MI5's strict requirements. During the game, your memory and observation skills are assessed. They also test your attention to detail and give you a map- reading quiz to get an idea of your aptitude for surveillance.

If you're a man over 6ft 1in or a woman over 5ft 8in, sorry, you'll have to look elsewhere for future employment. However, if you're short and you fancy walking around London, keeping tabs on the public, you might be exactly what MI5 is looking for. Make the cut and you'll receive a starting salary of £27,539, which rises sharply after 70 days of intense training.