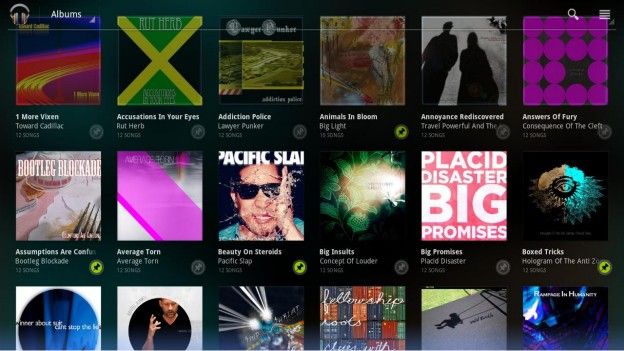 Google Music has finally launched in the UK. Here's all the key features that could make the service a genuine iTunes and Spotify rival

It seems like a small age since Google officially unveiled its Android based music service in the US last year hoping to give iTunes a run for its money. We've already run the rule over Google Music Beta, and now the full package is in the UK.

To find out how Google Music works and what you can expect, read on for our quick guide to Google Music.

Google Music: Up in the cloud

Embracing the world of cloud-based storage, Google Music users will be able to store and stream 20,000 songs from their own collection or bought in Google Play, from Google's cloud servers. Music can then be streamed from your smartphone, desktop and even your Android tablet. You can only download a track bought or stored in the cloud through your browser and to a device like a laptop a maximum of two times.

This desktop application is essentially your hub where you can both upload and download music from your own collection even if it's spread across several computers keeping any ratings, descriptions that you've added to them since.

The service will of course be available for Android smartphones where amongst other features you'll be able to make content available offline which will apply your choices to all devices running Google Music. To use Google Music on your Android device, you'll need to be on Android 2.2 and have the latest version of Google Play. Tracks can be saved offline by pinning them to your device. Unfortunately, you will only be able to listen to those offline tracks in the Google Music application.

With a slick new design and the recent addition of movie rentals, the Google Play will now enable users to buy millions of albums and individual tracks with EMI, Sony and Universal on board to cover mainstream artists, and a host of independent labels that collectively works out to over 1,000 record labels according to Google. You'll be able to preview tracks for 90 seconds, get a free song of the day like Amazon, while all tracks will boast 320kpbs sound quality.

One feature we will get ahead of our friends is the new matching service that sounds very similar to iTunes Match where you will be able to upload your personal music collection to Google Play. Saving you from uploading tracks, it will scan your collection and automatically add them for immediate access.

Remember Google+? You know that social networking service you fought to get invited to? Well Google Music will be popping up in your friend streams as well with the ability to share music that you've purchased with fellow Google+ users who can get a full free play of a track or an entire album that you've bought.

If the X-Factor route doesn't take your fancy, the Artist hub is a new way to get your unique sound noticed. Working similiar to the way developers sell apps on the Android Market, musicians (with necessary rights) can set up pages, dicate how much their music will cost and decide whether users can have 90 second previews, full previews or unlimited previews of their music. 70% of the revenue generated will be kept by the artist and Google also revealed that it is looking to allow artists to sell music alongside YouTube content like music videos for instance.

One of the ways Google is trying to entice people to use the service is by offering content than can only be found on Google Music. To start the ball rolling, this includes exclusive live concerts from the Rolling Stones, Busta Rhymes debuting his new studio album on Google Music, plus free live albums from Coldplay, Shakira, Pearl Jam and Dave Matthews Band.

The fear was that despite offering Google Music beta for free, a pricing scheme would be introduced on its official arrival. The good news is that the service will continue to be free and that it is no longer limited to those who managed to test it out first time around.

Thankfully, Android smartphone and tablet owners can try out Google Music now. The new iTunes Match-like feature will also be available as well as access to the 20,000 strong music catalogue.

Excited about Google Music coming to the UK? Let us know in the comments section below.