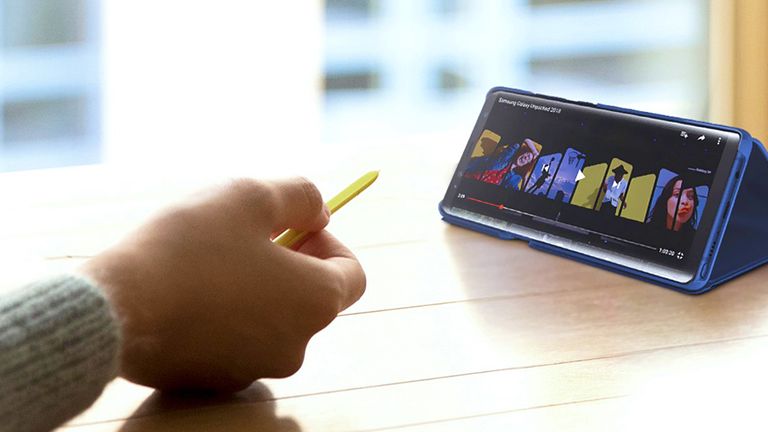 Samsung is hard at work on its next flagship smartphone, Galaxy Note 10. The new handset, the follow-up to the Galaxy Note 9, is widely-rumoured to sport the same Infinity-O display design seen on the Galaxy A8s and Galaxy S10 – albeit with a slight tweak that brings the titular O-shaped cut-out for the selfie camera to the centre of the display, instead of the squeezed into one of the corners.

Earlier renders of the design have already surfaced online and reveal the new holepunch for the front-facing camera. Whether it's more or less elegant than the embedded camera on the current-generation Galaxy S10 Plus is your call, but it's clear that rival manufacturers Oppo and Xiaomi have a much more elegant solution. And so, let us now all sit back and imagine a world in which Samsung brings an under-screen camera to the Note 10…

Beijing-based company Oppo recently shared a video of an as-yet unreleased smartphone with a selfie camera hidden beneath the display. When the screen is on – it's impossible to distinguish the lens. It's a truly impressive demo: no holepunch for the selfie camera, no notch, no pop-up camera, no flippable rear-cum-front camera.

While the Infinity-O has allowed Samsung to achieve an impressive 93.1% screen-to-body ratio, it won't be able to complete with the truly all-screen design from rivals unless it finds a way to drop the cut-out.

Tipster Ben Geskin revealed that another Chinese brand, Xiaomi, is also working on an under-screen camera back in May. Since there are now two such cameras in development, all we need is for there to be three and then it is officially a trend…

For those seeking the perfect, notchless smartphone screen experience – prepare to be amazed. 📲You are taking a very first look at our under-display selfie camera technology. RT! 🤯 pic.twitter.com/FrqB6RiJaYJune 3, 2019

Samsung has stated it wants to eliminate the O-shaped cut-out in future smartphones, using a design very similar to what Oppo has unveiled. Vice President of the R&D group Yang Byung-duk has revealed Samsung is still at least two years away from producing its futuristic all-screen design, which will embed the selfie camera beneath the AMOLED panel and use the screen itself as a speaker.

While Samsung is working out all the logistics around creating a smartphone with a 100% screen-to-body ratio, Byung-duk says the company will work to shrink the size of the hole-punch in the top right-hand corner of the Infinity-O design.

By increasing the amount of usable screen real estate around the selfie camera cut-out, Samsung hopes to gradually increase the screen-to-body ratio until the hole-punch is small enough that it's effectively invisible. If all this means we can expect to see bigger screens on smaller smartphones from Samsung, that's music to our ears.

Unfortunately, there's no information on when we might see this selfie camera solution appear in a final product, and even Oppo says, "At this stage, it's difficult for under-display cameras to match the same results as normal cameras, there's bound to be some loss in optical quality." Give it a few years though and perhaps we shall finally leap free of bezels and notches, without compromising camera quality.