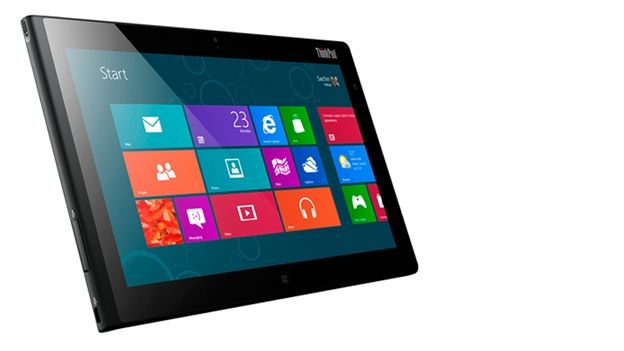 With the Microsoft Surface getting the ball rolling for Windows 8 tablets, Lenovo has been the first third-party to jump on board with its super-thin ThinkPad 2

The Lenovo ThinkPad 2 is the first Windows 8 tablet produced by a third-party and is Lenovo's first official Windows 8 product boasting a 10.1-inch screen, 9.8mm thin body and Windows 8 Pro on board.

Announced today the ThinkPad 2 is designed to be both a business tablet and also a work computer thanks to its upcoming Intel Atom processor and Windows 8 Pro OS.

With a 10.1-inch HD display (no resolution yet) the ThinkPad 2 measures in at just 9.8mm thin making it incredibly light for a tablet that also boasts Windows 8 Pro on board, the full version of Windows 8 for PC and Tablet.

There's a full-size USB crammed into the body as well letting you connect any peripherals from a keyboard to a printer, even a DVD re-writer. The screen has also been designed to allow an optional pen and digitiser to be connected up making it ideal for designs and using powerful designing software such as Adobe Photoshop.

Much like the new Asus Transformer Pad Infinity the ThinkPad 2 is compatible with a keyboard dock turning it into an ultra-thin fully-fledged work laptop.

Front and rear-facing cameras let you video-call and take photos whilst the Windows 8 features allow you to unlock the tablet by simply tracing over an image in any pattern you want.

With an HDMI port and the ability to wirelessly stream video this is just as much a media center as it is a business gadget and with two versions supporting either 3G or 4G available it'll give you fast internet access on the go.

There's no information regarding memory sizes but with Lenovo set to unveil the ThinkPad 2 at IFA 2012 you can bet that T3 will be getting hands-on with the first tablet to take on the Microsoft Surface.