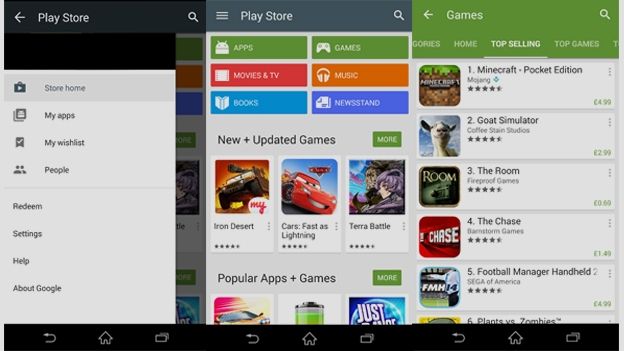 Google has just pushed out its latest Play Store update, bringing with it a host of design changes.

The new Play Store 5.0.31 touts a material design aesthetic for the first time, signalling the approach of Android L.

It's the firm's new software design language that looks to keep things simple and flat, amongst other points.

Material design is set to feature heavily in, and debut on, Android L, the next big update for the Android OS.

While we don't have all the details for Android L yet, it's expected to land sometime this month and might sport the moniker 'Lollipop'.

If you're using a stock Android device, you'll likely get the Android L update tout de suite, however skinned devices like the Samsung Galaxy S5 and the Sony Xperia Z3 might take a little longer to upgrade as their respective OEMs frantically code new software.

The new Play Store update is a glimpse into what to expect from Android L.

For starters, the logo is much flatter than previous iterations, although it still sports the 'bag-and-arrow' design we've seen before.

The innards have changed too somewhat, with icons appearing much flatter and minimalistic.

What's New is now highlighted and has moved up from the bottom for installed apps.

We're not sure whether Google is actively beaming the update to devices just yet, but you can snag it early by downloading a Google-certified .apk file from here.

It's got the thumbs-up from the big G, meaning it's completely safe and good to go for your device.

Word of warning - if you're using the Android L preview OS on your device already, then this update will cause the Play Store to crash.