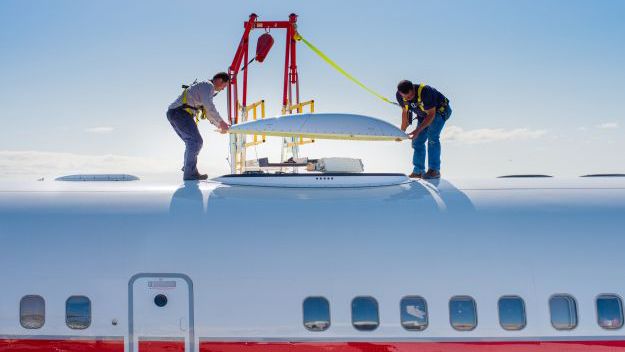 Up until now, the aeroplanewas one of the only places on the planet that was internet free. But those days of peace and quiet could soon be replaced with cat videos and uploading a Vine of Kate Moss attacking an air steward.

When rolled out, the technology could bring speeds of up to 50Mbps at 37,000 feet. While some airlines do offer in-flight internet, the speeds are more like dial-up than fibre.

Tests, conducted in the UK this June, made a connection between Honeywell's JetWave (in essence, a complicated and somewhat expensive antenna) andInmarsat's I-5 F1 Global Xpress satellite.

The test means that high-speed broadband could work on any airplane anywhere in the world and not just limited to certain areas.

The test flight connected toInmarsat's first Global Xpress satellite, I-5 F1. Inmarsat's I-5 F2, which covers the Americas and Atlantic Ocean, was launched earlier this year. I-5 F3 will complete the global broadband coverage line-up.

"Airlines, passengers and pilots continue to demand better, more consistent and faster in-flight Wi-Fi to make their jobs easier and travel experience better. The successful results of the recent tests signify that Honeywell and Inmarsat will soon satisfy these demands,” said Jack Jacobs, vice president of Safety and Connectivity at Honeywell Aerospace.

The service could go live later this year.