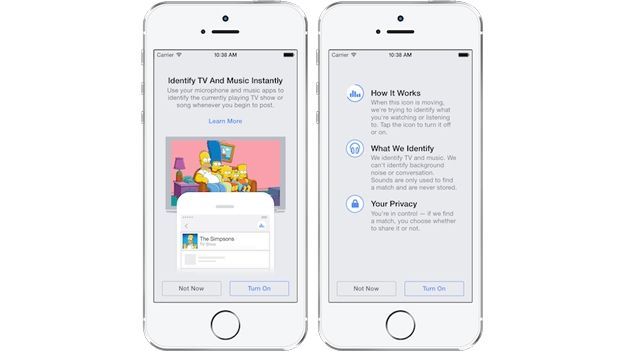 Facebook has announced a new feature that will let you tag a song, TV show or movie playing in the background while you update your status

The feature will be available on your smartphone's Facebook app. It makes use of the smartphone's microphone to listen to what's on in the background. Once it has identified it, it will insert it into your post, no typing required.

Facebook has said that songs will be linked to 30 second previews through Rdio, Spotify or Deezer. TV shows will not just put the name of the show, but also details of the season and the episode you're on.

For those concerned about privacy, the feature is opt-in meaning it is turned off by default. For those that turn the feature on, the microphone will be activated every time you go to write a new status.

The company has assured customers that it is not storing what is said or done during that time; it only uses the information to identify the song, TV show or movie.

You'll also have full control over what is posted incase you happen to be watching something you'd rather not have the world no about. Like My Little Pony – not what you dirty minded lot were thinking about.

There's no word on when the update will be coming to the UK. We'll try to find out for you.