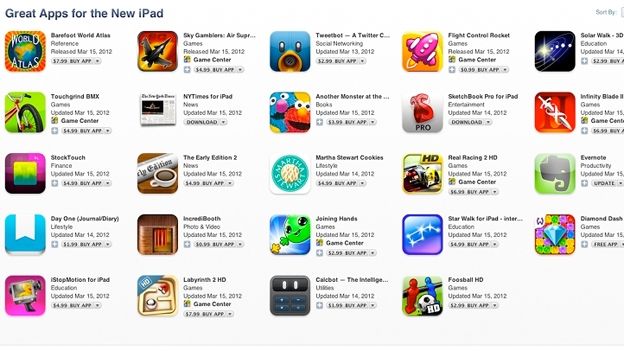 Are you the proud owner of a new iPad? Apple has published a guide to downloading the apps that will showcase the new Retina Display in all its high-def glory

Apple has published a list of 24 iPad apps, which have already been optimised to appear in glorious high definition on the new tablet's Retina Display.

App developers have been hard at work, making sure their wares look as perfect as possible on the astonishing 2048 x 1536 screen, which is now on sale across the UK.

Among the list published on iTunes are heavy-hitters like medieval slasher Infinity Blade II and the Evernote journal app. The New York Times for iPad has also had a fresh coat of paint, while the Twitter client of the moment Tweetbot will also be looking pristine on the new iPad.

Other apps include Real Racing HD, and two of the apps featured at the launch event last week; Sketchbook Pro and the flight-sim Sky Gambler's: Air Supremacy developed by Namco. Star Walk for iPad should also look incredible on the new display.

We've already reported on the likes of Apple's own iMovie, iPhoto and iWork suite and its Retina Display enhancements that have made them up to five-times larger.

Amazon also revealed that the Kindle app for iPad has had a makeover, but with iBooks to sell, we're not surprised that Apple has left its rival off the top 24 list.

Which iPad apps would you like to see enhanced for the new tablet? Let us know in the comments section below.