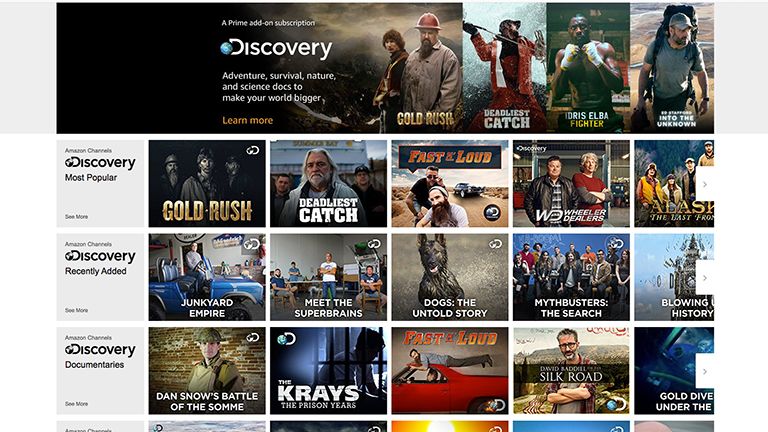 Amazon Channels launches in the UK today. Amazon Channels is a new subscription service for Amazon Prime members that allows them to add more than 40 TV channels to their Prime Video viewing experience.

The new channels, which can be watched live and on demand, include Discovery's premium factual entertainment series; Eurosport Player's live sport including all matches of the upcoming French Open Tennis; ITV's ad-free catch up service Hub+; and Amazon's own Bollywood channel, Heera along with more.

Here is the list of available Amazon Channels in full, along with their corresponding price:

Acacia TV – Hundreds of fun and effective workouts for every fitness level for £5.99 a month

Alchemiya – Great films and documentaries about Muslim culture and life for £3.99 a month

Arrow Video – On demand cult classics and horror from Arrow Films for £4.99 a month

BFI Player+ - On Demand classic British and critically acclaimed movies for £4.99 a month

BeFit UK –  Get fit fast with unlimited streaming of hundreds of workouts for £5.99 a month

Curiosity Stream – Exclusive documentaries from the world's best filmmakers in HD for £5.49 a month

Daily Burn – On Demand and live workouts including dance, strength training, yoga, cardio and more for £9.99 a month

Discovery – Documentaries and unscripted entertainment from Discovery for £4.99 a month

Eurosport Player - Live and On Demand sports programming, including Grand Slam tennis, cycling and winter sports for £6.99 a month

Fandor – A hand-picked collection of the most talked about indie, foreign and classic films for £3.49 a month

Full Moon Features - All the Full Moon classics and new releases on demand for £3.99 a month

Gaia – Yoga, nutrition, meditation and more for £7.99 a month

Horse & Country Play – The home of equestrianism and British country lifestyle, now on demand for £3.99 a month

ITV Hub+ – Watch live, download your favourite ITV shows for offline viewing, and catch up on tons of ad-free episodes for £3.99 a month

hayu (NBC Universal) - On Demand reality TV programming including Keeping Up with the Kardashians for £3.99 a month

Heera – An Amazon-exclusive on demand channel with over 600 Bollywood, Bengali, Marathi, Tamil, and Telegu movies and series including blockbusters like Sultan and Kabali for only £3.99 a month

Ketchup TV – Hundreds of episodes of shows for kids, packed with their favourites for £2.29 a month

Motorvision - On Demand TV dedicated to the automotive world including car reviews & tests, motorsports and lifestyle shows for £2.99 a month

MUBI – A new, critically acclaimed movie to stream every day for £5.99 a month

Nautical Channel – The network focused on sailing lifestyle, available live and on-demand for £3.99 a month

Nordic Noir and Beyond – The best thriller, crime and drama series from the Nordics and beyond for £4.99 a month

Panna – Easy-to-follow video recipes from master chefs and cooking courses for £1.49 a month

Pinoy Box Office – Filipino movies and series on demand for £1.99 a month

Planet Knowledge – Exciting and informative HD documentaries on nature, history, culture and more for £2.29 a month

Pongalo Next – Latin American movies and series on demand for £2.99 a month

Qello Concerts – The greatest concert films from icons and new artists like The Who, Queen, The Beatles, Muse and more for £5.99 a month

Realeyz – Independent films by award-winning filmmakers on demand for £4.99 a month

Rooster Teeth – Original sci-fi, gaming and comedy for £3.99 a month

Shudder – Backed by AMC Networks, Shudder super-serves fans of thrillers, suspense, and horror for £4.99 a month

Sweatflix – Stream HIIT workouts and yoga flows for £9.49 a month

Tastemade Plus – Our network of Tastemakers bring great food and travel to the world for £1.99 a month

The Great Courses Signature Collection – A curated collection of educational courses On Demand for £5.49 a month

UP Family – Entertainment for the whole family for £3.49 a month

Viewster Anime – ad-free anime on demand from Viewster for £2.99 a month

"For the first time, Prime members in the UK and Germany will be able to choose to watch premium TV channels without having to sign up to a bundle or a contract, giving them the freedom to pay for only what they want to watch. From live sport to Bollywood, arthouse cinema to reality TV, and award-winning TV shows from popular channels like Discovery and ITV, Amazon Channels gives power back to customers to choose exactly what they want to watch."

This seems like an interesting development of Amazon's Prime Video offering, which seems to diversify the streaming service's content library somewhat. The  à la carte-style pick and mix nature of the various channels is something that we welcome here at T3 Towers, however, right now we're unsure how willing people will be to pay a monthly fee on-par with, say, Netflix, just to access a single channel's offerings.

The fact that you can only avail yourself of Amazon Channels if you are already an Amazon Prime member, itself a £79 per year investment, also adds extra cost considerations into the mix.

There's no doubting the breadth of content offered though, so we can see people picking up the odd channel according to their interests. The fact that you can pick up and then cancel a channel at anytime is also welcome.

Anyway, to take a look at Amazon Channels yourself then head on over to the service's official website. Or for more information about Amazon Prime then head over here.