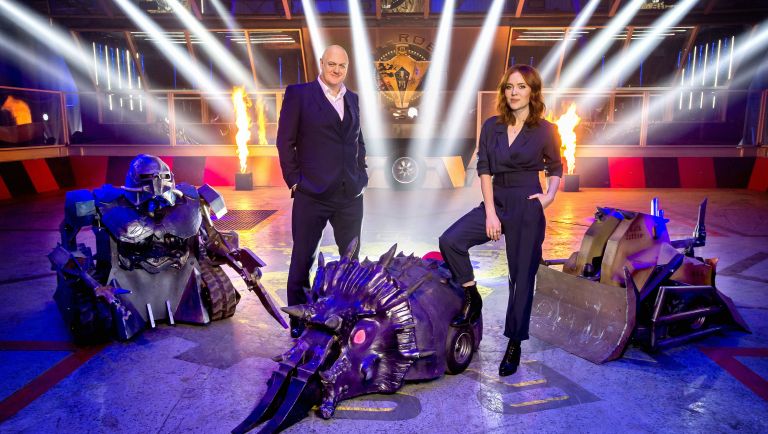 Sir Killalot and co shake off the rust and return to the arena… and we couldn't be happier. Here are a bunch of reasons why the new Robot Wars is awesome!

Yes, the actual House Rockets - those dealers of dastardly destruction in the Robot Wars Arena - are back! Come on, it wouldn't be Robot Wars without them. The original four the debuted in the very first series - Matilda, Shunt, Dead Metal and the daddy, Sir Killalot - all return, with the other six thankfully left to rot on the scrapheap. It may have been 12 years since the seventh series ended, but these CPZ stalking bots are still the patrolling badasses of the show.

2. The arena is back - and now it's bulletproof!

As iconic as the robots, the logo and Jonathan Pearce's over-enthusiastic commentary, the Robot Wars arena is a character all unto itself. The new version has been built from scratch, taking the designs of the original and adding in a sprinkling of 2016 to the mix. The flooring is now made up of 6mm steel boards (instead the wooden one used in the old formats), with 15x15m surface area that's been enclosed in a 20x20m polycarbonate box. And yes, it's actually bulletproof!

3. Dara and Angela are a great fit

Okay, if you were a fan from the very beginning of Robots Wars, no one was ever going to be able to replace Craig Charles and Philippa Forrester (we don't count Jeremy Clarkson - yup, he really did present RW for a single series - or the short-lived Julia Reed), but that doesn't mean fresh blood is a bad thing. Dara O'Brien is a perfect fit for a show with his love of science and Angela Scanlon, while something of an unknown to UK audiences, is just as quirky and easy going as Forrester was back in the day.

4. Jonathan Pearce is back, too

Look, we have to have someone from the old days. While many of us were worried that irritating bloke who voices over The X-Factor would probably get the commentary gig, the Plymouth-born football commentator has made his triumphant return to the Robot Wars mic with the new series and we couldn't be more excited. No one else gets as excited at the sight of remotely controlled pneumatic axes smashing through steel plates than Pearce.

Sure, a new series means a whole generation of new teams entering the arena - and we'll get to them shortly - but one of the best things about the 2016 incarnation of Robot Wars is the return of some familiar, if slightly older, faces. With them come some of the most beloved competitor robots from the show's long history, including Razer, Terrorhurtz and Sabretooth. Seeing these old steel beasts roll back into the arena brings a rust-coloured tear to the eye.

It shouldn't really - after all, it has been 16 years since the bloody decade ended, but there's just something emphatically '90s about the format of Robot Wars that feels so joyously kitsch. The backstage interviews set conducted while team's repair their bots, Jonathan Pearce going mental on the mic, flames licking from the pit in the arena, that flippin' logo. Let's be honest, it's a Fresh Prince episode and a Chumbawamba single away from being a full on '90s tribute.

In the 12 years that Robot Wars has been off the air, robotics has been going through a hyperactive transcendence. Everything from advancements in artificial intelligence to drone maneuverability have helped further the field in its quest for robotic perfection. And even something as simple as the creation of smaller and more powerful batteries has enabled teams to construct new fighting robots that can move faster and use weapons with far more power.

New Top Gear wasn't so much a revival, more an attempt at a soft reboot but it messed with the classic formula. Robot Wars, much like TG, sports a brand new set of presenters, but the show wisely retains the magic recipe of the original format. Introduce the episode, show off the robots, fight, repeat. The new faces make it feel fresh and new, but underneath the new blood there's almost everything you loved about the original incarnation.

9. A new generation can obsess over robotics

This is one of, if not /the/ best thing about a new series of Robot Wars. It's been 12 long years since the show went off the air with the end of the seventh series, and since then robotics has been transformed. Drones are everywhere and are on the cusp of becoming the new pace of camera production and deliveries, so what better time to introduce a new generation to the ever fascinating field of robotics? Plus these ones have axes and butch-sounding names.

10. We don't have to see Craig Charles' jackets anymore

We /loved/ Craig Charles. Come on, the man's Lister from Red Dwarf, for Pete's sake. From his cheesy yet absolutely necessary poetry ("We don't like losers. We don't like draws. We're winners here, on Robot Wars.") to the way he'd hype up the audience before the cameras would start rolling on each episode, Charles was the heart of the old format. But let's be honest, those tassel biker jackets (and that weird two-finger kiss thing) won't be missed any time soon.

Liked this? Check out The smart robots about to invade your home