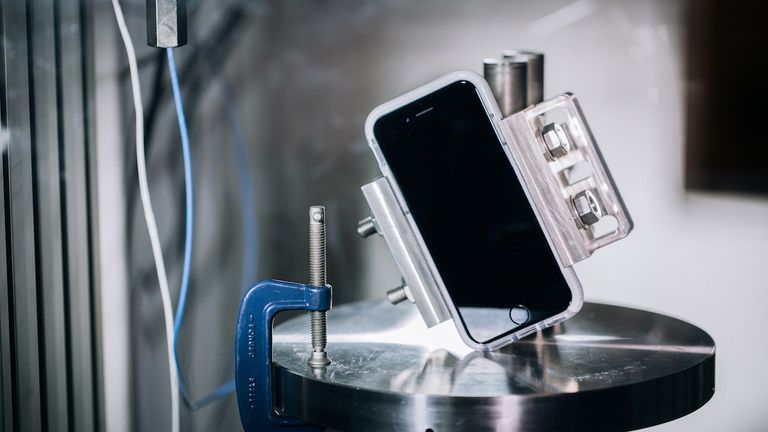 When new phones are announced it almost seems pointless when manufacturers talk about how thin, light and sleek the new devices are because the more expensive the phone, the more likely you are to cover it up. The case market is huge with companies like OtterBox, Spigen, and Speck expanding from the US and protecting our shiny new phones here in the UK. However, Tech21 is a case manufacturer that’s homegrown, just outside Central London, and is looking to change that precedent.

The company recently invited T3 to join them at the National Physical Laboratory (NPL) where they announced their partnership and showed us the testing labs they’ve been granted and the machinery used on every material and case they churn out.

One of the notions that was dispelled as soon as the tour started was that most cases label themselves to be of ‘Military Grade’ protection levels. Most case manufacturers out there decorate the packaging of their products with stickers that advertise this — it sounds tough, right?

In fact, being ‘Military Grade’ means that the handset has been dropped just 4ft on to 2 inches of plywood a total of 26 times, the hitch here is the product can be replaced 5 times during testing. I’m not sure about you, but this scenario doesn’t happen that often in the real world.

The guys at Tech21 seemed certain their cases offer unparalleled protection as they nonchalantly threw their phones on concrete during the presentation. The company seemed particularly excited about their new iPhone 7 and 7 Plus range that offer three layers of protection that absorb more impact force than ever. It was hard to think this was just marketing talk when phones kept hitting the floor and surviving with ease.

Tech21 certainly aren't the first company to break away from the Military Grade standard. OtterBox adopted a similar strategy by creating their own standard for drop protection called ‘Drop Plus’ that goes through much more extensive testing. Telling consumers how many phones were killed during testing seems to be the latest trend to show the lengths manufacturers are going to in order to create the best cases out there. In case you were wondering, Tech21 have destroyed over 100 phones in testing so far…

Touring the labs was like walking around the Tower of London in 1500s, but instead of torturing heretics, they tortured smartphones.

The main piece of equipment was the guillotine of the case testing world — this is designed to take the impact protection of cases to breaking points. The metal pole that comes crashing down on either the case or individual material being tested can be weighted to add further strain to Tech21’s products. All of this destruction is filmed on a slow motion camera that records every detail from the cracks in a case forming to individual materials absorbing the impact. It turns out this was the deathbed for the century of iPhones — a number only set to rise.

Secondary torture equipment included machinery testing how much colour escapes each case over time and how much each material could withstand forces like wind and heat. It’s certainly not an easy job being a case at the NPL with saunas and wind tunnels being rewards for surviving the crush test. The lucky ones survive this and make it to the final stages of testing that ensure the minutia like phone signal is still functioning as it should before they wrap themselves around a phone.

You think getting a case through Tech21 testing sounds extreme? That’s nothing compared to the vast testing done to get products into Apple retail stores. The guys at Tech21 seemed to have hairs poking up from their skin just talking about how meticulous Apple is in ensuring the case doesn't crumble under extensive drops. Let’s just say Apple makes Tech21’s testing labs look more like a kids playroom than the Tower of London…

Colin Woodward, the Chief Marketing Officer for Tech21, emphasised the difficulty of creating a thin and light case designs while offering more protection than ever by using materials that spread the impact force across the entire case:

“You don’t need a big, bulky case to give you amazing protection. Tech21 cases are thin and light and give you the same level of protection, if not more than many of the cases that are much, much bigger and thicker.”

A good example of this was the Evo Aqua, which they’ve developed to push the iPhone up to that highly desirable IP68 standard, meaning the phone is fully waterproof and not just the standard splash proof you get with the iPhone out the box. Most cases of this nature look heinously bulky and dull to boot, however we think Tech21 has made a case like this attractive right down to the digital crown looking switch you turn to change your phone from silent to loud. They do this case in a version that keeps your screen exposed while providing a watertight seal around the rest of the phone so you don’t get any unwanted water seeping through.

In a time where smartphones are trying to differentiate themselves with curved displays and fingerprint sensors on the back of the device, it’s not easy being a case manufacturer. However, Tech21 is certain that its partnership with the NPL can speed up development time for everything they’re looking to bring to market:

“Because we’ve got these facilities and the conversations we can have, we can be quicker at bringing new things to market. That ability to own everything that we do from case design to materials has, in many ways, been facilitated by this great partnership that we’ve got [with the NPL].”

The next time you put your new phone in a case, remember all of the tests and a thought that goes into that little product, and the poor cases that didn’t make it out of the testing laboratory.

And the best iPhone 7 cases