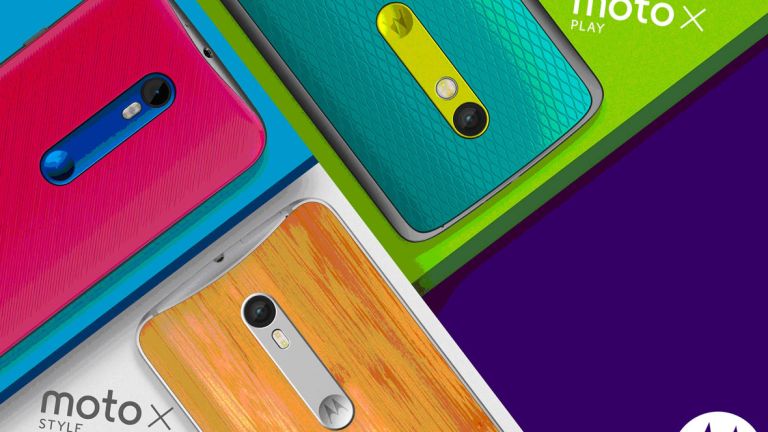 Through two successive models, the Moto X has made a great impression. With a great build and feel, impressive specs and the latest version of Android, the 2013 and 2014 Moto X phones have been able to give any handset a run for their money - they also inspired Google's latest Nexus 6.

Can Motorola keep up with the likes of Samsung and LG in the race to build bigger and better Android phones? And that's not even considering the OnePlus 2 announced earlier today.

We we now have the answer. The Moto X Play and Moto X Style are two new handsets that Moto has launched alongside a revamped 2015 version of the Moto G (it's the third generation of both handsets).

The £299 Moto X Play promises 48 hours use from a single charge, a water resistant body and sizable 5.5-inch display. There's alos a 21 megapixel camera and a new Qualcomm Snapdragon processor. No, we don't know what chip excactly as yet. The Moto X Play release date is late August.

Check our our Hands on Moto X Play review.

Moto X Style is a more customisable handset, with a largeer 5.7-inch display (that's like the Galaxy Note 4) and the same 21 megapixel camera. Both handsets have 5 megapixel rear cameras. We don't yet have a Moto X Style price or release date apart from "later in the year".

Check our our Hands on Moto X Style review.

Like other members of the press, we have received an invite to a London event at 3pm BST today where we're expecting new versions of both the Moto X and Moto G to be announced.

Rumblings from inside Motorola suggest the new phone will feature the Snapdragon 810 processor like many of this year's other flagships. Elsewhere, a lot of the rumours flying around have been contradictory: some sites are reporting 3GB of RAM in the new handset while others are saying 4GB, so take your pick.

A 5.2-inch display running at a QHD resolution of 1440 x 2560 pixels seems likely, but a few leaks suggest there's also going to be a larger 5.7-inch version as well, exclusive to the Verizon network in the US. What everyone seems to agree on is that the phone will come running the latest Android 5.1.1.

A larger phone would make sense in the context of the iPhone 6 Plus, but limiting it to one network seems to be a self-defeating move. Other rumoured specifications include a 16MP camera (up from 13MP) and the USB Type-C technology that's slowly making its way to a number of different phones and other devices.

What is the new Moto X?

The first Moto X appeared in August 2013, back in the days when Google owned the company - notable for its customisation options and voice activation controls, it was followed in September 2014 by the second generation Moto X. Motorola President RIck Osterloh has suggested an annual refresh cycle for all the company's major products, so it looks like we can expect a 2015 edition imminently.

Of Motorola's three current handsets, only the budget Moto E has had an upgrade so far this year. The 2015 Moto G, like this year's Moto X, is rumoured to be launching soon - Motorola launched both the G and the X on the same day last year, so it looks likely that we'll see a repeat performance.

Since that launch date we've seen a whole swathe of phones hit the market, including the iPhone 6 and iPhone 6 Plus, and the Samsung Galaxy S6 and Galaxy S6 Edge. The new Moto X is going to have to bring some pretty compelling features to the table if it wants to be able to take on the major players again.

As we've already mentioned, Motorola has a big press event coming up. The company has been hinting at a yearly upgrade cycle for its smartphones, and since then we haven't heard anything to suggest there won't be a new Moto X (and a new Moto G) later on this year. As good as the Moto X 2014 edition is, it's starting to look a little jaded next to the smartphones of 2015.

Motorola does of course have other irons in the fire - it's owned by Lenovo now, as well - but smartphones are what the company focuses on, and the Moto X is the best phone it has to offer at the moment. Barring some kind of production line disaster, we'd say it's very likely there'll be a new Moto X before the end of September.

The company may well try and differentiate the Moto X in terms of features rather than raw specs: we've heard one or two leaks suggesting the phone could come with a microSD card (which very few top-end phones now have) and a front-facing flash (again a relatively rare feature for today's handsets).

What could its impact be?

The Moto X may not grab as many headlines as some of its rivals, but it's an important phone in the Android ecosystem: some of the voice and gesture controls first seen in the Moto X helped set the trend for future handsets from all the manufacturers. The Moto Maker personalisation tool is another reason why the phone stands out, and it sounds as though the new Moto X will offer similar customisation options too.

Still, when the 2015 Moto X does appear, it's going to be up against some stiff competition - Apple, HTC, Samsung and LG all have their 2015 flagship phones on sale now, with more still to come from Google, OnePlus and Sony. The Moto X is going to have a job on its hands to stand out in a crowded market.

If Motorola can fix the problems with battery life and camera quality that have prevented the Moto X from being a truly great phone in the past, then the new handset could be a winner.

Check out what we're expecting with the iPhone 6S and Galaxy S7.