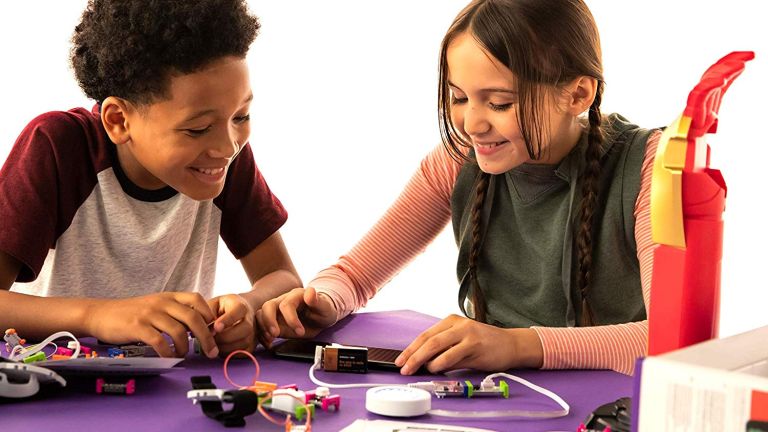 It's a universal truth that adults will struggle to get what toys the latest generation of kids like, or why. But don't worry, your backwards-cap-wearing friend of the youth, T3, is here to help you find the best toys.

We've got everything from the surprise collectibles that are so fashionable right now, to fun engineering and coding toys that are as educational as they are engrossing, to cool cuddlies and, of course, the hottest Lego.

A great playset for one of the most popular kids' series

This 2-in-1 vehicle is set to be one of the biggest toys this year. Close it up and it's a big jet vehicle, for flying around with useful carrying handle. Or, open it up to reveal a mobile command centre playset, ready for Paw Patrol figures. There's more, though: the exclusive Mighty Ryder fits inside a mini jet that you can launch with the push of a button, for rescues in tight quarters. This mini jet also fires discs, whether it's docked in the large jet or on its own, and the whole thing has light and sound effects. For Paw Patrol fans, it's a must.

Take marble runs to the next level with this engineering set

The educational toy maestros at Ravensburger have another hit on their hands with this modular building set, which brings the good old-fashioned fun of creating a marble run bang up to date. Use the hexagonal pieces and track to create a gravity-powered flow with all kinds of twists and turns – plus elements like Y points, free falling, and even a “Magnetic Cannon”. You can expand it infinitely too, with add-ons that include the like of catapults and hammers, so you can really turn it into Rube Goldberg-esque fun.

Give adorable animals any look you want… then wash it off

+Four animals to colour+Adorable bathtub to clean them away

This cute set comes with four animals in plain white, plus a bunch of Crayola pens that kids can use to customise and colour those animals… and then they want to change those looks, they can wash the animals off using the adorable included bath/shower, then go again with a new idea. The set includes a cat, a rabbit, and two dogs, plus six washable pens.

Turn your iPad into a tactile learning tool

+Tons of creativity in one box+Great app-powered engagement

Made for kids in the 3-5 range, this set uses the front-facing camera on your iPad to let kids solve challenges and get creative using physical objects, which the iPad recognises and can 'scan' into the app that the kids are interacting with. ABCs helps kinds learn the alphabet, practice phonics and expand their vocabulary; Costume Party lets kids mix and match clothing to see characters on-screen react to it; Squiggle Magic lets kids put together weird creation that come to life in the app; and Stories tests lots of different ways of using the app, as kids try to help characters in the stories overcome obstacles.

+Motorised for serious blasting+Designed to match the game

From the video game to real life, Nerf's Fortnite blasters are a big hit. There are a bunch of different options, but we like the AR-L here, for its 10-dart magazines with motorised rapid-fire blasting. It comes with 20 darts, so you can load up your magazine ready for a second full round of firing, too. There's a button to accelerate the motor, so it's ready to fire at full speed once you get the target in your sights (and there are two flip-up actual sights).

Get into the art of excavation

+Surprise reveals are cool+As are pirates

With all the success of ‘surprise package’ opening videos on YouTube, it’s no, uh, surprise that loads of new toy lines are getting in on the trend. This is one of the weirdest, making it simultaneously one of the coolest. Each Treasure X package contains a block of soft rock, that has to be dug through to reveal a surprise figure. Oh, and it’s possible the treasure in the middle might be actual gold.

Grow your own surprise doll

+Weird and clever conceit+Never know what you'll get

Sticking with the surprise theme, here's one that's such a strange idea, but we like the zaniness of it a lot. Each of these dolls comes as a plant pot, and kids will add water. Then, something will grow through the pot's top – it could be a cake, crystals, fruit… and this is actually the hair of your doll. Once it's grown, you can open the put to reveal the full doll, which is now ready to play with. The pot acts as a kind of playset, too. There are 22 different Blume Dolls total.

Lego's Hidden Side range is about a group of kids who discover that their town has a serious ghost problem. There's a range of Hidden Side sets to cover every price, and all have hidden spooky extras built in. Even more importantly, all can be played with in a special AR game on your phone, so there's loads of ways to play after you've finished building. In the game, you'll bust ghosts and find secrets around the sets, and you'll even need to physically move parts of the sets to make things happen. We've picked this graveyard sets as our favourite because it's a great mix of price and fun – there are some great touches in the model.

This sloth dances and claps his soft arms to the sound of music, and when babies press the buttons on his body, he'll play tunes with an educational bent. He's designed for kids to explore – playing with the lights on his belly, and his grabbable arms. If you have more than one Linkimals toy (they come in other animal designs, but we like the sloth's design), they'll all react together, forming a chorus line of entertainment.

Build the best meal from the dice that come around on the conveyer belt – that's the premise of the game here. Everyone rolls their own small pool dice with adorable cute-faced sushi dishes on, then chooses a dice to keep to themselves. If you can get the right matching sets of dice, you'll get big points. However, you don't get to keep rolling the same dice – every turn, they all get switched between players, so your options getting switched up all the time. But also, if you don't like your dice, you can  use your chopsticks to nick someone else's, or you can use the menu to reroll them. This is a very light game (suitable to 8+) that has just enough tactics to make you feel proud of winning, but enough randomness that younger kids can do well.

A foldaway playset for these popular dolls

+Big and comprehensive playset+Folds away for storage while looking fun

This glamper-van (look, kids have to learn about glamping sometime…) is the perfect accessory for the popular LOL Surprise Dolls – it folds out into a whopping 2 foot by 3 foot playset with 10 different areas for your dolls to hang out, including a light-up pool, sleeping area and fashion runway. It comes with over 55 accessories to play with, and the front can be driven around as its own separate car toy.

For the budding Tony Stark or Shuri

LittleBits’ inventor kits are a brilliant way to let kids play with electrical engineering: they have lots of modules that just magnetically click together to build complex circuits, with lots of different input and output options, such as sensors or light and speaker books. This Marvel-themed set ways to build wearable tech that evokes Iron Man or The Wasp, and it’s all programmable from the accompanying app, so you can make the LED light matrix do whatever you like. As a fun finish, the set encourages you to build the the actual casing out of household items in a very Blue Peter fashion.

Like a mixture of reverse Jenga and buckaroo, in this game you build a skyscraper by placing your cards down as ‘floors’ and building walls from L-shaped cards, which is not exactly the most stable structure, and you really don’t want it to fall. But things get even more tense, because you each have a little wooden animal superhero, all of whom want to take their place as high up the tower as possible, defending it… which makes it more unbalanced. Oh, and there are evil spider-monkey blocks that hang off the edges of cards. The tension rollercoaster of delicately placing your cards successfully, then realising you still need to move a hero block risking a whole new chance for disaster, is brilliant.

Who doesn't love a bit of rainbow doodling?

+Great stocking filler+Easy to play with this different art style

This like a block of Post-Its, but instead of writing on them with ink, you actually scratch away the surface, revealing the rainbow pattern underneath. Write simple notes and it gives you words a fun colourful underpinning; or get doodling or create patterns to really play with the colourful layer.

Big hair that's fun to style, like a fancier Troll

The draw for these dolls is their giant, easy-to-style hair. It's got a soft texture ("cotton candy" they call it) that means it holds its shape after you've gotten it just how you like. This set comes with extra accessories you can use to style the hair, including hair chalk for adding some extra colour. These are also surprise dolls, too – in the packet, you can see the big hair, but you'll have to unwrap the dolls once you open it all up.

A baby dinosaur on your finger that you can tame

+Dinosaurs are the best+Reacts to touch

Every kid wants a dinosaur as a pet, right? The Fingerlings Untamed Raptor grips your finger, but has a wild temperament, growing and snapping its jaws at you when touched. But, if you brave stroking its head, it will those not into ancient lizards.

Control your own R2-D2 and take him through missions

This set builds three iconic Lego droids (though, we'll admit that R2 is somewhat ahead in the 'iconic' leagues), which you can then control through a story-based app on your phone that teaches programming. You'll take these droids through events of the Star Wars story, controlling them using a simple system of (appropriately) blocks – drag in what movement or other actions you want them to do, and then later add in proper computer logic for more advanced automation.

Battle to the digital death with app-connected lasers

Breaking away from Nerf’s traditional foam projectiles, the Laser Ops funs shoot infrared light, aiming to hit sensors and register killer shots. They feature lights sound, indicators for health and ammo, and a reload button. The guns connect to an app, that lets you customise how you play, and stores stats from your battles. And if you want more people to play, you can add more guns, and divide into teams using the app.

Silly and tense fun for kids

Like a tropical spin on Buckaroo, this is a game of trying to load as much fruit and other jungle creatures onto the orangutan hanging on a wire as possible before he twangs, flinging himself and the other objects into the air. There are no batteries required – it's all just good ol' fashioned physics. It's silly, it's suspenseful, it's surprising – everyone will love it.

This two-in-one remote control vehicle is a car when you clip on the propellor top (complete with blade guards), that can take of from any flat surface, be flown around, and can even flip in the air. Or, use the car mode to drive it around on the ground. It comes with ramps and gates for stunt and flying challenges, so there’s a huge amount of fun to be had from one small box.