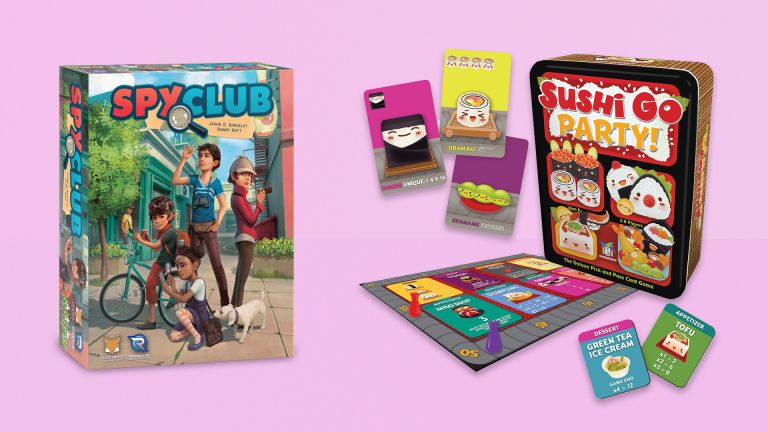 Children love board games. It's adults that seem to feel, for some reason, that they ought to have grown out of them. Maybe that's partly because the games on shelves at mass-market stores up and down the country can be pretty terrible… but that's why we've picked out the best board games for kids that will actually keep them entertained and engaged.

Getting a great children's board game doesn't mean going super-childish, though – plenty of the games here have a great claim to be on our list of the overall best board games, and are great for everyone in the family. It's just that they're also fast-paced and simple enough to be one of the best board games for kids too.

Some of the board games we've chosen are indeed made or simplified for younger kids, but most of them are universal, meaning everyone can have fun together.

All of these will help ensure peaceful afternoons of play, and perhaps even sneak a little education into the bargain. And we reckon you'll have a hard time not getting sucked in yourself if you give our best board games for kids a chance.

The best cheap board game for kids

Kids' games often take a twist on a well-known traditional title as it makes for easier learning. No surprises, then, for guessing that this is a version of dominoes in which you have to match land types instead of dots. Kingdomino cleverly ups the tactics by replacing a hand of dominoes with a system where you pick your domino a turn in advance. But the more points the piece you take is worth, the further down the turn order you'll be for the next one. It's a simple slice of strategy that's enough to elevate this award-winning title into fantastic family fare.

The best cooperative board game for kids

Cooperative titles where all the players work together to beat the game are great for children because it means no fighting or falling out (or, at least, less of it), and Spy Club is one of the best. The core game, where you're cycling through cards collecting colour sets of clues, is tense and challenging. But what elevates it is the story mode which wraps each game in a wider narrative of sleuthing and adventure for an addictive whole. It's a tad complex for small children but that's fine: it's easily engaging enough to entertain adults, too.

A perfect kid-friendly board game of flicking penguins

'Dexterity' games are a great leveller when playing with children. Little fingers and thumbs often prove capable of clever tricks that elude older, gnarlier hands. This is a quick-fire flicking game where you propel a wobbly penguin piece around a series of rooms, made out of the game box itself. You can aim for doors, but trick shots that jump over walls are also allowed. Players must collect fish tokens to win, except for the Hall Monitor, whose job is to catch the fish-filching penguins instead. This sequel (technically called ICECOOL2, but who's going to type that, really) adds a few new options over its predecessor, but both are great, and you can stack the games together for even more flicking fun.

The best kids' board game with an on-going story

This cooperative title starts out super simple. On your turn, you move and either smack a zombie or lock a gate in the zombie-infested school. Lock all the gates and everyone wins. But that's not the end. This is a 'legacy'-style game which means that after each game, you'll reveal instructions that change your copy permanently depending on what you did in the last round, making your version (and how things play out) unique to you. It's done by adding stickers to card components, and what kid doesn't like stickers? As the campaign unfolds, it adds new rules and components revealed from snazzy secret envelopes, leading to a thrilling narrative. You can even name the zombie pieces in the back of the rulebook.

Like a kind of reverse Jenga, build precarious sculptures (if you can)

A more complex, but also more varied, dexterity game than Ice Cool 2, Junk Art is like all the piece-stacking games you can dream of gathered in one box. There are four sets of odd shapes in four colours, and a deck of cards describing mini-games to play with them, creating sculptures you can admire in the end (assuming they stay up). They're very imaginative, from traditional piece-piling to collaborative towers to crazy seat-swapping as you balance things. You never know what's coming next, and they equally offer kids of different skill levels a worthy challenge or a chance of victory. There are even blank cards for any budding young game designers to create their own.

The best kids' board game for larger groups

Turn kids onto the charms of Japanese food with the cute sushi characters of this card drafting game. Take a card from a hand that you're dealt and pass the rest on; take another card from the hand you've just been given, and pass on again; continue until the table runs out of cards. The aim is trying to collect matching sets of sushi to score points. What makes it work is the mix of memory and risk management needed to ensure you collect what you're aiming for – are there enough cards of a set type for you to complete what you've started? And by the time the cards have gone once round the table, there's the added confusion of wondering what everyone else is collecting. Sushi Go Party has lots of different types of sushi you can swap in and out of play to add new scoring options for tons of variety – the original Sushi Go is the same principle, but without all the extra options, and is ideal if you want something very small and portable.

Teaching kids to be telepathic

+Really small and inexpensive+Very funny, despite its simplicity+Almost no time to set up
Today's Best Deals
£16.39
View at Amazon
34 Amazon customer reviews
☆☆☆☆☆

A unique cooperative game that's so simple you can teach it to anyone who can count. Playing it well, though, is another matter. You have to play in silence, which may be a relief to parents everywhere, but it's still super tense. Players get a small hand of number cards from a deck that runs one to one hundred. And, without talking or revealing your hand, everyone has to collectively lay them down one at a time in the right order. That's it. A huge, award-winning hit, kids will enjoy both the play (it's genuinely thrilling to get a load of close-together numbers in the right order) and solving the social riddle of how it's possible to have a successful game at all.

A pretty and tactile tile-laying game that works the brain

There's a specific child-friendly version of this tile-laying game called My First Carcassonne. But it's unnecessary, as even quite young kids can grasp how to play the full version, with the possible exception of scoring with 'farmers' – but you can just leave that rule out. It's still a fun balance of tactical nous and collaborative art as you build roads and towns in medieval France. You're trying to own high-scoring features by placing your tokens on them and adding tiles while they're still being built. But beware: you have a limited supply of your own tokens, so don't tie up too many in unfinished works, because otherwise you'll miss out on what's still to come! Kids love to engage with the visual element here – the longer and more twisty you make a road, or the more sprawling a town, the points they earn, and the more satisfying it is to complete.

This is a glorious game of card stacking for children of any age, including grown-up ones (especially when sozzled). You're using folded cards to build a tower, delicately balancing each 'floor' on top whatever already exists, with infuriating monkeys to hang on them. The aim is to keep everything in balance and stop the structures toppling – but there are all kinds of shenanigans you can pull to make sure it's someone else who takes the fall. It looks great, plays fast and has enchanting cartoon art.

A classic game made super-accessible

+A great game made easy to learn+Frustration-free fun

-Won't be able to grow up with kids
Today's best Ticket to Ride: First Journey deals
Days of Wonder Ticket To...
Amazon
£48.38
View
We check over 130 million products every day for the best prices

Another franchise with an edition made for kids, but one you might want to consider. All the Ticket to Ride games are a bit like classic card game Rummy. You collect sets of coloured cards and cash them in to claim train routes on a board, ideally before someone else nabs the route you want. They're exciting and challenging to play well, but also potentially quite mean as players jockey to block each other's routes. They're fine for older kids, but First Journey is a bit simpler, a bit quicker and a bit less nasty for the younger crowd.