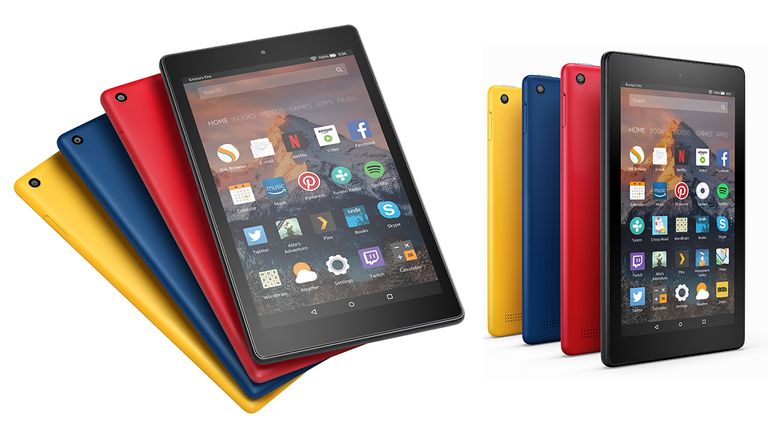 Here at T3 we love tech that combines excellent functionality with value for money, and the Fire tablets certainly fall into that bracket: Amazon keeps on putting out these super-cheap tablets, and we've gathered the best Amazon Fire tablet deals right here for you.

To make these devices even more tempting, all the latest slates in the Amazon Fire range come with Alexa inside – ready to handle weather forecasts, kitchen timers, music playing, and so on.

If you've already signed up for Amazon Prime, that adds on several more reasons to buy one of these Amazon Fire tablets, with extra music and movie features thrown in. No matter what you want from a tablet, the Amazon Fire tablet range fits the bill.

If you want a level of music access to rival Spotify, you can pay another £79 per year for Amazon Music Unlimited, which is a decent deal. Unlike on Amazon Echo there is no offer of a cheaper, one-device-only subscription, but you do get the more limited Amazon Music with an Amazon Prime account.

You also can't Chromecast, which seems vaguely mad until you realise that the Chromecast is a rival to the Amazon Fire TV devices. However, you can always connect to a high quality speaker via Bluetooth.

Fire HD 10 Tablet with Alexa...
Amazon
$189.99
View Deal
We check over 130 million products every day for the best prices

Storage 32 or 64GB with microSD up to 256GB plus "free, unlimited cloud storage for all Amazon content"

Storage 16GB with microSD up to 256GB plus "free, unlimited cloud storage for all Amazon content"

Storage 8GB or 16GB with microSD up to 256GB plus "free, unlimited cloud storage for all Amazon content"

Amazon Fire Kids Edition tablets are identical to their adult incarnations but with a child-safe interface, a two-year, no-questions-asked warranty, one year's free access to Amazon's many many Gigabytes of kids' entertainment (after that you'll have to pay a subscription, dad), and a big bumper case.

So this is as Fire 8 HD but with 32GB storage plus up to 256GB via microSD, one-year sub to Amazon Fire for Kids Unlimited, "kid-proof" case, and 2-year guarantee.

As Fire 7 but with 16GB storage plus up to 256GB via microSD, one-year sub to Amazon Fire for Kids Unlimited, "kid-proof" case, and 2-year guarantee.

What the latest Amazon Fire tablets can do

Unlike the Echo devices, but like Amazon's Fire TV media streamer line, Alexa on the Fire tablets is activated with a button press by default. On the latest Fire tablet models, you can have hands-free access to Alexa ("hey Alexa"), but you need to enable the feature in the device settings.

Once enabled, you can ask Alexa for the weather, sports scores, news and much, much more. Just like the Echo Show smart displays, the Fire tablets add a visual element to certain replies, with a week's worth of weather highlights appearing on screen, for instance.

What it doesn't do, that the Show does, is let you make video calls or check in on elderly relatives (although since the calling service hasn't even launched in the UK yet, that's arguably a moot point).

In fact, presumably Amazon won't roll out most of the core Show functionality to Fire tablets, because if they did, why would you bother buying a Show?

From what we've seen of it, the integration with general tablet activities is very slick, letting you dismiss Alexa, but then call it back via a pull-down menu, when you realise you've forgotten what it said about the weather, or what the tune stuck in your head is.

Alexa's music and news feeds can play in the background as you do other tablet-related stuff, and all the usual support for a wide range of smart home kit is present and correct, for your lightbulb-dimming and thermostat fiddling pleasure.

Pleasingly, Alexa is also available on previous generation Fires (as the 7-inch one used to be called), and the HD 8 and HD 10 tablets via a free software update.

While nobody is going to accuse Fire tablets of being at the cutting edge of processing power or beautiful design, they are more than adequate for practically all standard tablet tasks, easy to grip and manoeuvre, and dirt cheap at under £50 and under £80 respectively for the 7-inch and 8-inch models.

Although the screen resolutions are not changed from the older models, contrast has been boosted to make ebooks easier to read and video to ping a bit more.

They're also robust and colourful, qualities that come into their own on the Kids Editions, both of which are also regularly updated.