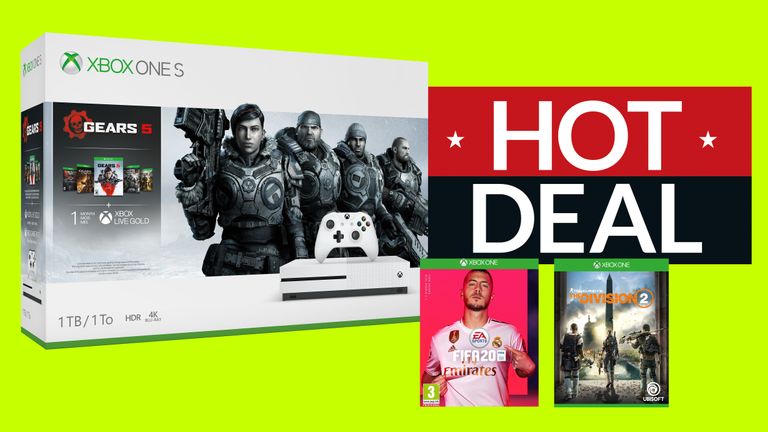 This is the best gaming deal we've seen all year. That's because if you head over to Argos very quickly then you can pick up a brand new Xbox One S 1TB console along with Gears of War 5, FIFA 20 and Tom Clancy's The Division 2 for a jaw-dropping price point of £199.99.

I mean, holy moly! That package is incredible for the money, and is stuffed with brand new, highly rated games. I mean, FIFA 20 launches today for goodness sake. Gears of War 5 launched but a couple of weeks ago to much acclaim. And The Division 2, which launched earlier this year, was given a glowing review by gaming site IGN, who said it was a "a refined and intuitive shared-world shooter with many dozens of hours of great content and progression you can enjoy."

Oh, and then there is a blooming 1TB Xbox One S thrown in, too, and all for just £199.99. That's the same Xbox One S that comes loaded with a 4K Ultra-HD Blu-ray player and allows access to Microsoft's incredible library of Xbox games.

The full details of the deal can be viewed below.

Xbox One S | Gears of War 5 | FIFA 20 | The Division 2 | £199.99 at Argos
In terms of value for money this deal is just off the charts. It lands you the superb Xbox One S console (1TB edition) along with the very latest, as in it launches today, FIFA 20 football game, the epic cover shooter Gears of War 5 (launched just a couple of weeks back), and also the super action RPG Tom Clancy's The Division 2. And it does that for an insanely low £199.99. That's a bundle saving of £76.98 and, literally, hundreds of hours of amazing gaming fun on one of the most stylish, feature-packed consoles on the market. A console that also comes loaded with a state-of-the-art 4K Blu-ray player. Yep, this really is an astonishing deal.View Deal

For even more great gaming deals be sure to check out T3's best Xbox One S deals, best Xbox One X deals, best PS4 deals, and best Nintendo Switch deals. We also have a guide to the best video game consoles on the market today, too.