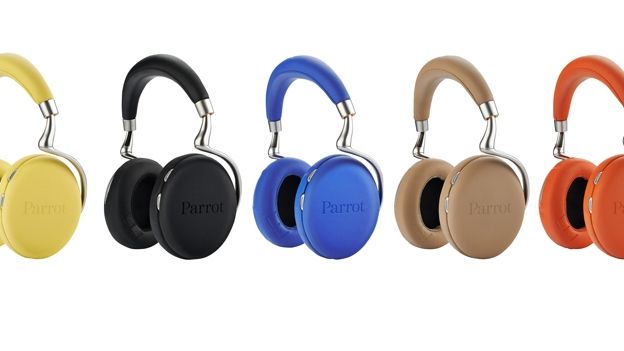 Boasting, "more autonomy, more algorhythms, more sensors," Parrot's designer headphone range rides again. We don't know what they sound like, but my gosh we like the conceptualism.

If youGoogle the phrase "preposterous French designer", a pic of Philippe Starck comes up. He's excelled himself with this, his latest co-prodcution with Parrot, purveyors of everything from in-car chargers to smartphone-controlled drones. We mean that both in terms of the product itself and Philippe's haiku-like description of it:

"This is the Zik 2.0
Finer, rounder, more sensitive
It becomes part of us, our sound and nothing else."

Yeah, cheers for that, Phil. What we think he's trying to say is that he likes the Zik 2's clever features, which include app-controlled tuning of the sound (a graphic equaliser, basically). The most interesting application of this is that artists are being invited to share their own presets, so you can hear their music exactly as they would like you to. Musicians signed up so far include Jazzy Jeff (sans Fresh Prince, alas) and Dorfmeister out of Austrian chillout kings Kruder and Dorfmeister.

The smartness doesn't end there. A Street Mode feeds sounds from around you back into the mix, so you don't have to have the isolating effect that noise-cancelling over-ear headphones inevitably cause. It also means you can hear your own voice when making phone calls via the headphones - a feature further bolstered by various enhancing/noise-cancelling DSP effects and the addition of a bone-conduction speaker that better picks up the lower frequencies in your voice.

Carried over from the first Zik there's "head detection" (put it around your neck and the music automatically pauses), noise cancellation (via six microphones), the ablility to connect via either Bluetooth/NFC or a wire and touchpad control. You tap, press and swipe the right earcup to control music, activate Siri/Google, or to make and take phone calls.

Last, but not least, the app's background colour will automatically adapt to match the colour of your Zik 2. Now that is design. Oh, and the official "face" of the Zik 2 is not Philippe Starck but bearded lady-man Conchita Wurst, whose gender-non-specific performance not only won Eurovision this year, but also annoyed the Russians so much, they've pulled out of future Eurovisions. Nice work.

We were huge fans of the original Ziks, but these look better in every respect. We'll have a review for you ASAP.

£299 from Apple Stores, available next week.