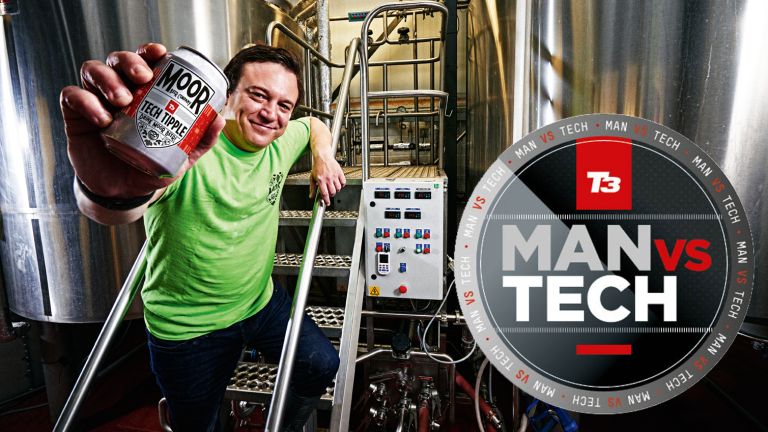 To celebrate International Beer Day T3 has republished this classic Man vs Tech where we go hands on in the creation of our very own top T3 tipple. Or, if you prefer more of a continental beer, why not check out when T3 visited Heineken's Göss brewery - here's a hint: we drank A LOT of beer.

To brew our own craft pale ale, with the help of independent brewery Moor Beer, based in Bristol. Can we create a beer with distinction and flavour? We'd like to think so...

Rob Carney is the Editor of T3 Magazine . While he's never brewed his own beer, he's drunk enough of it to think he could

Moor Beer has the very latest brewing tech installed – from a massive mash tun to enormous fermenting vessels and a state-of-the-art £300,000 can- sealing machine

How did we get on?

Could we create our very own craft beer? Truth be told, I was a bit reluctant to accept this mission – not because I don't like beer, but because I like it too much. Could I survive a day in a brewery, mixing the fundamental ingredients of a T3 tech beer? Could I avoid falling head first into a vat of fermenting alcohol? Would I be flat on my face by midday (again)?

I headed to Moor Beer in Bristol (I liked the name straightaway), a multi-awardwinning micro-brewery specialising in craft beers and exporting to 22 countries. The ﬁ rst consideration was what a T3 craft beer would taste like. Would it be a rich, dark ale with sophistication, á la the Samsung Galaxy S6 Edge? Or would it be lighter and versatile like an iPad Mini? After tasting a few of Moor's brews, it was decided that the T3 beer should in fact be a variant of the brewery's So'Hop – a “highly sessionable pale ale balancing rich British ﬂ oor malt with tropical Southern Hemisphere hops”. Whatever that meant, it sounded delicious.

Now, I have no idea about brewing beer. My experience of beer is vast, but I'm usually on the other side of the brewery door. So it was time for a chat with Moor's brewer, Tom Scrancher. As we walked from the bar at the front of the brewery through to the fermentation rooms, I was almost sent into a trance by the beautiful smell of hops. There were small timers everywhere – devices that could be equally at home in a doctors' surgery.

The ﬂoor was wet with drainage throughout, so I got changed into wellies (there was no way I was ruining my Kurt Geigers) and, taking a deep breath, Tom and I got down to brewing talk. For those of you unfamiliar with how that lovely, lovely amber liquid that tastesso good and makes you forget all of your troubles is made... Hmm, don't you just love beer? Sorry, where was I? Oh yes, how it's all created. Firstly, you need good malted barley and wheat.

This particular pale ale uses grain from Tuckers of Newton Abbot – the ﬁ nest 'grist' around, according to Tom. This is known as a grain bill, and, as Tom explained, this is what's needed to create a wort – essentially, the liquid extracted from the grain, through mashing in a giant vat called a mash tun (which is appropriately nicknamed 'Big Momma'). The grain is held in a giant hopper above the mash tun – which Tom told me was invented by Dennis Hopper during ﬁlming breaks in Easy Rider. I think he may have been lying.

But anyway, the grain – now extracted of all of its sugars – is emptied into a big sack ready for cows to eat. It smells like bran ﬂakes. Very hot bran ﬂakes. Looking again, I saw Tom inside the mash tun, sweeping it out and getting it ready for sterilisation. It was the perfect balance of precision technology and good old-fashioned labour.

Next, the vorlaufed – or clariﬁ ed – wort is added to a kettle, or copper, to boil and sanitise. And this is where the hops are added. Interestingly, Tom explained that adding the hops – in this case Southern Hemisphere hops – at the beginning of this process makes a more bitter product; at the end a more subtle ﬂ avour. I added the hops to our T3 Tech Tipple. In a nutshell, this liquid is then pumped through to the fermentation vessel, where yeast is added. Fermentation takes anywhere from a few days to a week.

So I'd be back soon to see how our T3 pale ale was doing. As an aside, Tom explained that Moor has its own 'yeast pimp' – a man who comes and checks the amount of active yeast in the brew. This is how the brewer knows when to crop (or remove the yeast) and crash- cool. Of course, when you chill the beer, the yeast goes to sleep. The fermentation vessels are crash-cooled using Glycol-clad cooling jackets, which takes the beer from 20 degrees to minus-four degrees in 2448 hours.

There's a whopping 3,300 litres of beer in each vessel, which is siphoned off to the ﬁlling machine. Madness. Then there's the canning process. Of course, cans are cool again, and no longer associated with a sub-par beer. And this is where I was amazed by an awesome bit of industrial tech: namely, the Lubeca Can Seam two-head seamer. This £300,000 piece of huge mechanical magic ensures that no beer ever touches the metal, thus ruining the ﬂavour (the cans have a membrane inside, and this is never torn by the Lubeca). It goes at a frightening pace.

The cans are actually ﬁ lled by yet another impressive machine – the Leibinger Counterpressure Filler. Cans are purged with CO2, which removes oxygen before the ﬁ lling process begins, and then the Lubeca takes over the crimping and seaming. It's a hugely impressive process. If there's one thing I learnt on my T3 beer-brewing adventure, it's that precision is key.

The master brewers at Moor Beer leave nothing to chance – theirs is a craft that's built on history but facilitated by modern brewing technology. Returning to the brewery, myself and Senior Art Editor Simon ﬁnally got a chance to sample some T3 Tech Tipple – served to us by Justin, the brewery's owner no less.

A 4.1% variant on Moor's excellent can-conditioned So'Hop, it's a slightly ﬂ oral, smooth pale ale that's extremely drinkable – and I still don't know if the latter is a good or bad thing. We've ordered a load of Tech Tipple to send out to some of our best friends, assuming the T3 team doesn't get its grubby hands on it ﬁrst.

Liked this? Check out Man vs Tech: Avoid a DIY disaster