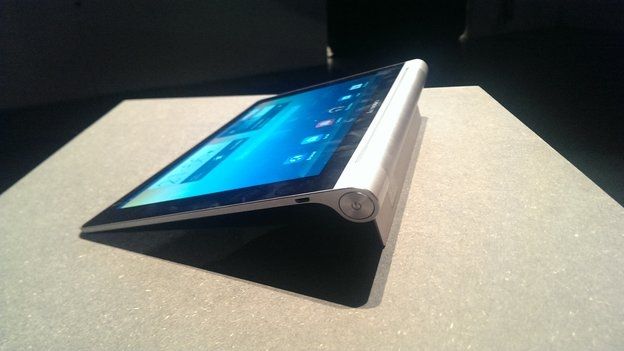 Lenovo have launched the Android powered Lenovo Yoga Tablet in two sizes at star studded events in Milan and the US.

The 10 inch and 8inch devices have an slightly unusual tablet form factor, with a large bulge along one edge for grip. This also contains a aluminium kickstand, and raft of batteries usually found in netbooks that give the Yoga Tablets claimed battery life of up to 18 hours.

They feature high definition 1280 x 800 displays, a 5 MP auto focus rear camera plus an additional front camera, a micro SD expansion slot, allowing up to 64 GB of additional storage, WiFi and optional 3G in select countries and a micro USB connection and Dolby DS1 for rich audio. Lenovo have also built an optional Bluetooth keyboard for the 10-in model that functions as a cover, it wakes up the tablet when it's removed and puts the tablet to sleep when it's attached.

The tablets were presented along with the announcement that celebrity Tweeter and former Demi Moore squeeze Ashton Kutcher has joined Lenovo as a product engineer.

Jan Huckfeldt, VP marketing EMEA Lenovo said: “Aston Kutcher is a good example of our target market, which we call the millennials. These are the people who have multiple devices in their lives. We studied the behaviour of these users to design this product, and found that everyone needed a tablet stand at some point. We have taken considerable care to move the tablet's centre of gravity so that it is now in the palm of the user. The Lenovo Yoga tablet's battery life of 18 hours is unique in the market.”

In the hand, the new devices are well balanced and the build quality belies the price point – check back soon for the hands-on...