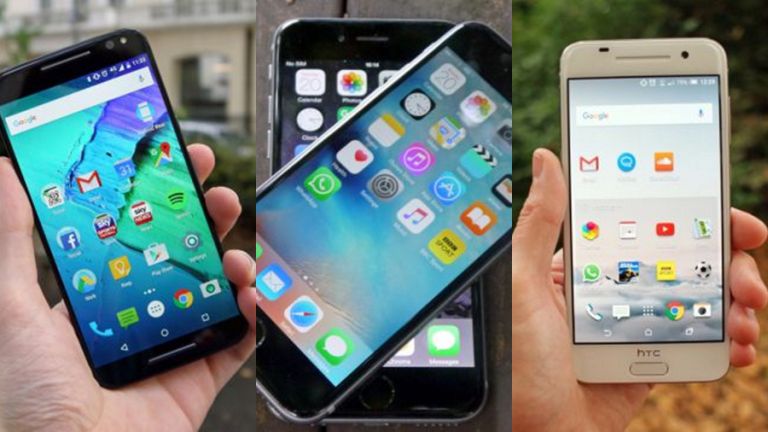 High street phone shops aren't as common as they used to be, but if you walk into one of the remaining ones you'll still be met with a dizzying number of choices for your next handset. Unless it's an Apple Store, of course - then the choice is fairly straightforward.

With dozens of new mobiles hitting the physical and virtual shelves every year, picking out the right one for you isn't easy without some expert advice - and that's where we come in. Here's everything you need to consider when you're in the market for a new smartphone.

Platform: Android vs iOS vs Windows

A crucial factor for many, a complete irrelevance for some, your phone's OS is going to go a long way to defining your experience with it. As the major players have stolen so many features off each other, the differences between the big mobile operating systems are less pronounced than they used to be, but it's still something to bear in mind.

Android is traditionally seen as the geekier and more customisable of the two main OSes. You can play around with home screen layouts, swap Google's default apps for third-party replacements, add widgets or even a whole new launcher. You get Google Now too, perhaps the most intelligent and proactive of all the digital assistants out there at the moment.

iOS is usually considered to be (slightly) more stable and secure than Google's offering, but the walls of Apple's garden are pretty thick: the OS doesn't play particularly nicely with other platforms or devices and you have to love Apple's way of doing things to love iOS (and many do, of course). The app selection is still just a little ahead of Android as well.

Then there's Windows, which many people have dismissed as irrelevant on mobile phones at this stage. Windows 10 Mobile marks Microsoft's last shot at making an impact on smartphones, so you may want to try one of the company's new flagships - app support is still lacking, but for Microsoft apps and Windows compatibility it's difficult to beat.

After the operating system, the second most important question is just how big you want your phone to be. Unfortunately for fans of smaller handsets, the trend is for larger and larger screens, but you can still find a few sub-5-inch displays if you look hard enough. At the top end you can find screens that are pushing 6 inches from corner to corner.

That display size affects how good Netflix is going to look on screen as well as how easy the phone will be to slide into your pocket - it really depends what you value most. If you've never tried a larger phone before you might be surprised at how quickly you adapt to always using it in two hands rather than one, but ultimately it's down to personal preference.

Resolution is listed in pixels and indicates the number of pixels packed into the display: a smaller screen size may well have a higher resolution, which means pixels will look sharper. Look for the pixels-per-inch (PPI) specification - the higher the better, but most modern smartphones have resolutions that are perfectly acceptable, so this isn't a dealbreaker.

Something else you might want to look out for is whether the screen uses AMOLED (favoured by Samsung for example) or IPS LCD (which the iPhone uses). There's no right or wrong here, but AMOLED tends to offer brighter colours and IPS LCD displays are typically sharper and cheaper to produce. There's not much between them but bear it in mind.

After the screen size and resolution you'll come across a wealth of specifications that may or may not mean much to you. Internal storage space is an easy one - how much room there is for your stuff - but check if you can expand this with a memory card and consider how much of your files are always stored in the cloud anyway (Spotify, Netflix, Google Photos).

As on a laptop, the processor and RAM affect the speed and thinking power of your device. They're the main - but not the only - indicators of how fast or slow your phone will be in use. Obviously the higher specced the mobile the better, but unless you're playing top-end games every day you can save a little money by settling for a decent mid-range option.

The quality of the camera is of course crucial for a lot of us: the megapixel rating tells you how big the resulting pictures are going to be, but there are so many factors affecting the image quality, and so many proprietary technologies in use, that you're probably best just checking online reviews and sample shots to work out the winners in this department.

Then there's battery life. Battery capacity is usually shown in mAh or milliampere-hours - a larger figure means a bigger battery - but again there are so many other factors involved, from the size of the screen (a large display uses up more energy) to the efficiency of the circuitry inside the phone, and this can vary significantly between manufacturers.

For all of these areas - performance, camera quality, battery life - it's better to get some real and professional opinions rather than trust what you're being told by the people who've made the handset. Specifications are useful, but they can only take you so far, and it's how a smartphone performs in use for week after week that's going to be most important.

Price and other factors

We've left price until the end but for some it's the most important factor: you could just decide on a budget then walk into a store and get the very best phone you can at that price. No one wants a slow phone, of course, but as we've said unless you're editing video or running the latest intensive games you don't necessarily need to go for top-end specs.

There are plenty of other areas to consider too: Motorola's phones can be bought through a neat Moto Maker customisation scheme, for example, while Apple phones make a lot of sense if you've got a lot of other Apple kit around the house. In fact how well your new phone plays with the devices you already own is one of the most important considerations.

That should give you some idea of what to look out for the next time you're shopping for a smartphone, but of course the landscape is changing all the time - keep your eyes on the latest innovations and newest handsets as much as you can. Product cycles are important too, as new launches mean you can often get slightly older handsets at a much better price.

Liked this? Check out our guide to 2016's hotttest smartphones