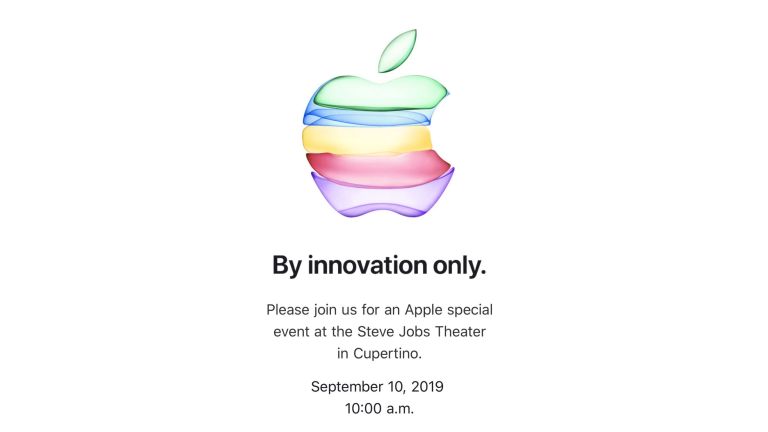 If you're looking to upgrade your Apple iPhone, you should mark September 10, 2019 on your calendar.

Apple has mailed out the invitations to its feverishly-anticipated annual media event, where the Cupertino-based company is widely-tipped to unveil three new iPhone models, a new range for the Apple Watch, as well as more information on Apple TV+ which is set to launch with a flurry of blockbuster new shows in November.

As previously rumoured, the event falls on Tuesday September 10, 2019. It begins at 10am in Cupertino, which is 1pm on the East Coast, and 6pm here in Blighty.

Apple is expected to unveil successors to the flagship iPhone XS, iPhone XS Max, as well as the more affordable iPhone Xr. Apple Watch Series 5, which will be able to detect blood pressure and ship with two new premium finishes is also expected.

As for the invitation itself, there's not a lot to unpack. The iPhone manufacturer is known for hiding a number of hints about its plans in the graphics and taglines on the exclusive invites.

"By innovation only," doesn't give much away about the next-generation iPhone. However, the six colourful logo could offer some clues. After all, Apple is rumoured to be bringing back the nostalgic logo on its latest handsets. Also, the colours used in this logo are exactly the same as the ones rumoured to be coming to the iPhone Xr successor.

Prominent YouTube creator Marques Brownlee has also pointed out how similar the colours used in the new logo, and rumoured for the next iPhone Xr, are to the iMac designed by Sir Jony Ive in early 1999.

The rumored iPhone 11 colors matching with the invitation to the September 10th event may look familiar to old school fans… pic.twitter.com/pAOvo0xmaiAugust 29, 2019

Provided Apple sticks with its usual launch schedule, we'd expect pre-orders for the new iPhone models to give live from 8am BST / midnight PT / 3am EST on the Apple Store online and the app.

As for the iPhone 11 and iPhone 11 Pro models themselves, Apple is widely-tipped to stick with a very similar industrial design to the iPhone X, iPhone XS and iPhone XS Max, albeit with a controversial new square-shaped camera housing with a triple-camera system.

The new triple-camera is tipped to help Apple catch-up with rivals like the Samsung Galaxy Note 10, Huawei P30 Pro, and OnePlus 7 Pro, which offer a much greater array of photography modes and options – from increased optical zoom, better low light photography, and finally, ultra-wide shots.

Bloomberg has previously reported that Apple wants to use a triple-lens system to power all-new Augmented Reality (AR) experiences, like the ability to mask digital elements to your face using the front-facing system on the iPhone XS, which isn't currently available on the rear-camera. To ensure there is consistency across its flagship product lines, the new camera is also tipped for the next iPad Pro refresh.

Cameras aside, we're also expecting to see a new A13 system-on-a-chip. If history has taught us anything, this will likely send the new iPhone models charging up the charts to become the fastest smartphone you can buy. A new colour option – vaguely described as "rainbow" by sources speaking to YouTube creator EverythingApplePro. The new finish is likely to be similar to the shimmering, colour-changing Aura effect on the Samsung Note 10, and Huawei P30 Pro.

Storage options are believed to be the same as the existing line-up, starting at 64GB for the entry-level model, followed by 256GB and 512GB. One tipster on Reddit, who doesn't quite have the same track record as some of the other more established sources quoted in this article, claims the iPhone XS Max successor will have a 3,969mAh battery – quite a step-up from the 3,174mAh cell it uses right now.

Coupled with the efficiencies of the new chipset, it's possible that battery life is going to be one of the biggest plays for Apple this year, just like it did with the iPhone Xr, which has the longest battery life of any iPhone launched to date.

Faster Face ID facial recognition unlocks, slow-motion video from the front-facing camera, a new replacement for the 3D Touch pressure-sensitive displays fitted to its predecessor, and a fast-charger in the box are all heavily tipped to be coming too.

Meanwhile, the iPhone Xr follow-up is expected to move to a dual-camera system on the back – like the current flagship models. It will also benefit from the faster silicon.

And what about the names? Twitter user CoinX claims Apple will begin to use the "Pro" moniker already prevalent in its MacBook and iPad ranges with the iPhone this year. An unknown quantity at the time, CoinX accurately tweeted the final brand names for both iPhone XS and iPhone XS Max a week before the announcement.

“Pro” for iPhone? Crazy naming schemes over the past few years.August 10, 2019

With the launch scheduled for Tuesday September 10, we won't have to wait much longer to find out. Stay tuned to T3 for all of the news as it happens.