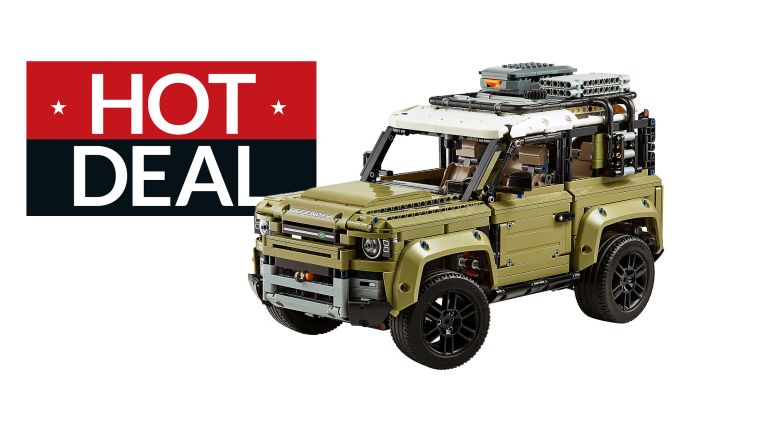 We're still weeks away from seeing official Black Friday Lego deals, but both Smyth's Toys and Debenhams have jumped in with big early sales on Lego sets, some of which rival the best Black Friday deals we'd expect to see when the time comes.

Even better, this discounts are one some seriously juicy stuff, including the brand new Lego Land Rover Defender set we raved about here, as well the fantastic Lego Harry Potter Hogwarts and Lego Star Wars.

We've picked out some of our favourites from the deals below, but here's where you can find the full range from both stores:

Lego Technic Land Rover Defender | Now £128 | Save £32
This recreation of the classic car has Lego's most complex Technic gearbox to date, independent suspension for each wheel, all-wheel drive, working steering, detailed interiors… it's the business.View Deal

Lego Star Wars Betrayal at Cloud City | Now £224.99 | Save £75
You may never see this epic set for cheaper! It's a giant playset in the shape of Bespin, from the Empire Strikes Back, and you'll build loads of familiar scenes and rooms from the movie, and it's packed with minifigs. From the landing pad (complete with Slave I and cloud city car), to the Carbonite chamber, to Leia's chamber, to the final railings of revelation… this is hours of fun to build, and is full of tuff to do afterwards.View Deal

Lego Harry Potter Hogwarts Great Hall |Now £74.99 | Save £15
One of the best toy releases of last year, this is a fantastic build of Hogwarts most famous room, including loads of minifigs, and a detailed inside of the room to play in. It looks fab, and fits together with the other Hogwarts sets, including…View Deal

Lego Harry Potter Hogwarts Clock Tower | Now £68.99 | Save £18
New for 2019, this packed playset includes the Entrance Hall, the Defence Against the Darks Art classroom, the Hospital Wing, Prefects' Bathroom, Dumbledore's Office and a section of icy decorations for the Yule Ball, plus lots of minifigs in their Yule Ball attire. And, again, it's detailed and authentic to the movies on the outside.View Deal

Lego City Deep Space Rocket and Launch Control | Now £71.99 | Save £18
Lego worked with NASA on Mars colony sets for 2019, and this is the biggest and best of them. It's got a space centre, it's got a big rocket, it's got a cool transportation track and robotic arms – the perfect gift for kids who dream of other planets.View Deal

Lego Harry Potter Hagrid’s Hut | Now £39.99 | Save £18
Hagrid's two-part hut has a cosy interior, pumpkin patch outside, Buckbeak the Hippogriff, and six minifigs, including Harry, Ron, Hermione, Hagrid, Cornelius Fudge, and even an executioner, which we think might a Lego first…View Deal

Lego Technic Forest Machine | Now £84 | Save £36
If you like the intricacies of Technic, this is a great set: it includes a motor to power a pneumatic system that operates the boom and grabber. You can also rotate the cab, and it has working steering and suspension. It's actually a two-in-one set too – you can turn it into a log loader instead.View Deal