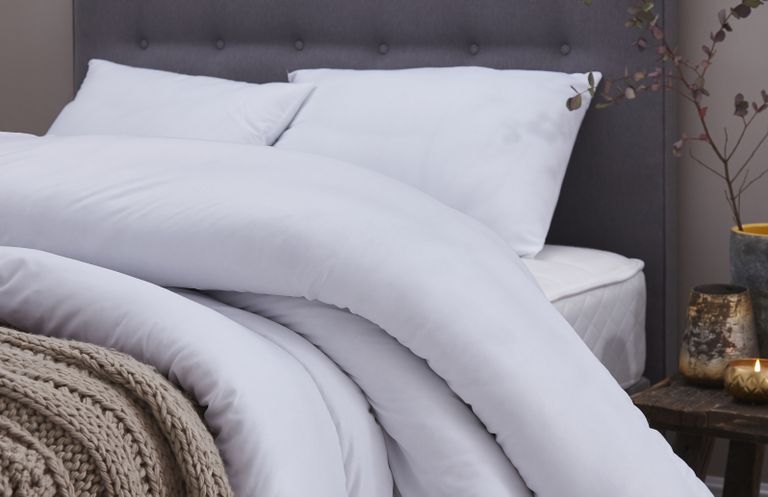 There are also some choices below in less traditional materials, such as silk, wool and synthetic fibres – even a mix of synthetic stuffing and wholesome and sustainable bamboo from Panda. Whether you're looking for a new duvet for summer, winter or all year round, we've got you covered in this guide.

Buying a duvet: what you need to know

When it comes to choosing the best duvet, there are a couple of terms to consider. Firstly, the tog. That’s essentially its warmth factor: the higher the tog, the warmer the duvet. For a summer duvet, look for an option between 1-4 tog; for a winter duvet, you’ll want 10.5-15 tog. Or, you could choose a double duvet set, with a 'winter' and 'summer' duvet that can be joined together to make a kind of 'Roland Emmerich's The Day After Tomorrow' super-duvet.

Alternatively, a new breed of all-season duvets – like the new Simba Hybrid Duvet – shun tog ratings entirely. Instead, these use space-inspired fabric technology to regulate your temperature, cooling you down if you become too hot, and warming you up if you become too cold.

Most importantly, look out for the type of material that fills your duvet. A lot of people tend to go for feather, which while heavy, allows you to wrap your duvet around yourself completely. Down is lighter, equally as cosy as feather, and not as much filling is required to provide the equivalent tog.

Then there’s synthetic microfibre. Recent technological advances have allowed more expensive microfibre duvets to offer the same amount of breathability as down and feather, and they can be washed more regularly than natural fillings too. There’s also cost-effective duvets, which are perfect for the spare room, or those on a tight budget. Hypoallergenic duvets, of course, are good for those with allergies. To help you choose the right one for you, here's our pick of the best duvets right now.

The best duvets you can buy

Best all-seasons down duvet – a touch of luxury every night

+Suitable for all but the most extreme temperatures+Feels great

If you want to avoid being cold as you sleep, in winter, but also not sweating and boiling in summer, one obvious answer is to buy two duvets. And that's what this package from John Lewis & Partners is. Specifically, this is a combo of a 9-tog spring/autumn duvet and a 4.5-tog one for summer. With poppers on both, you can then combine them to make one 13.5-tog mega-duvet for deepest winter. Although a lot of people will find the 9.5-tog is actually quite sufficient in colder weather, and that they don't really need to ever break out the really big guns.

There are plenty of brands doing the same sort of double pack but John Lewis delivers the best mix of value for money and proven quality.

This goose down option seems optimal for most people. It feels more pleasant than any synthetic duvet and is claimed to be both suitable for people with dust mite allergies and resistant to odour-causing bacteria. We can vouch for that: after years of use, ours has not made us sneeze or itch, nor does it have any particularly offensive 'odour'.

Further assisting that, this duvet/pair of duvets is easy to clean, although John Lewis insists it must be tumble dried immediately afterwards. Quite what happens if you don't do that is not clear, and we have quite successfully dried it on an airing rack, but the official advice is to tumble dry, so try air drying at your own risk.

You could also opt for a similar John Lewis & Partners 3-in-1 in Siberian goose down for an even more luxuriously snugglesome night's kip, or there is the more affordable duck down, if you are some sort of cheapskate.

There are two approaches to the all-seasons duvet. One is the route used by the John Lewis duvet above, which is to sell you two duvets that can be stuck together, giving you the choice of a thin one, a thick one or a very thick, double one.

The all-season Simba Hybrid Duvet, however, uses space-inspired, phase-change fabric technology to regulate your temperature all year round, making sure you’re never too hot or too cold. The idea is that you’ll never need a separate summer duvet and winter duvet again. Depending on what sort of temperatures your bedroom gets to, it may or may not be true that it's ideal all year around, but it definitely keeps you warm on cold nights, yet does a decent job of keeping you cool on all but the hottest nights.

That's thank to Stratos. No, not the 1970s aftershave, but an advanced fabric technology that reacts to both your body temperature and the temperature outside, absorbing heat if you start to become too warm, and storing it, ready to release if your temperature drops. On the other side is soft, breathable cotton; while a super-soft hypoallergenic fibre fill inside the duvet helps you stay comfortable throughout the night, using semi-conducting materials to draw any excess heat away from your body. Square quilting keeps the filling spread evenly across the duvet, and quick-fit tabs reduce the time it takes to make your bed.

We'd take a down duvet over this, on the whole, but the Simba Hybrid Duvet is the best synthetic alternative out there.

This is very much like a more luxe version of the John Lewis duvet at #1, although this is just one 13.5-tog duvet, as opposed to two that can be combined to give 13.5-tog warmth. Because it's Siberian goose down, this does not mean a huge amount of weight, but it does have a pleasingly cosy heft to it.

When Arctic winds from the north east blow over in the winter, you’ll be thankful you bought this. John Lewis & Partners' deluxe duvet is made from 100% Siberian goose down, which is naturally airy and insulating, and the brand says you’ll feel ‘perfectly warm without being weighed down’. Textbook.

This is a high tog duvet, with a high quality filling that has been sourced as a bi-product of the food industry, so animal welfare is also a factor here. Admittedly, the way it has been sourced means the geese have been killed and eaten, so it's not that much of a factor, but still, at least they're trying.

• If you want a truly ethical goose down duvet, The White Company has an Icelandic Eider duck down duvet where all the feathers have been hand picked from the abandoned nests of migrating birds. No, really. The cost is just a little prohibitive, but nobody said the ethical life was easy.

• Buy Eiderdown duvet, made to order from The White Company, from £7,500

Now, the first thing to get out of the way here is that Panda's The Cloud Bamboo Duvet does not feel like sleeping under a pile of bamboo. It is, however, covered and partially stuffed with hypo-allergenic, eco-sustainable, insulating and temperature regulating fibres derived from bamboo. And very nice it is too.

The second thing to get out of the way about the Cloud Bamboo Duvet is that it doesn't feel that much like sleeping under a cloud, either. In fact, with it's slightly jelly-like stuffing, the nearest thing I can compare it to is sleeping under a large, soft bag stuffed with Haribo. Which, as you can imagine, is a pleasing experience.

As with Simba's duvet, it's very hard to confidently say you could really sleep under this all-seasons duvet in absolutely all temperature conditions – most particularly when it gets balmy in summer. At least Panda is willing to give it a tog rating – 10.5 – rather than pretending it has no heat rating because it's so futuristic, as Simba does.

However, in average UK conditions the Cloud does a great job of keeping you warm without making you sweaty, which is as much as one can ask, really. It also strikes a very good balance between being light, but not so light that it feels insubstantial.

With a 10-year guarantee giving peace of mind – not that we've ever managed to break a duvet, and certainly not one costing up to £380 – this White Company quilted wonder feels more luxurious than John Lewis' Hungarian goose down offerings. It is admittedly somewhat more expensive as a result, but you get what you pay for.

The cover is 329-thread-count cotton percale, with an elaborate box construction giving even warmth. For some people, 10.5 togs will be too warm in summer but it should be good for most of the year. You can attach any The White Company duvet to any other The White Company duvet, so if 10.5 tog is in fact not warm enough, you can add a 4.5-tog one (from £125) easily. Or, if you live in a house with no windows, in the Outer Hebrides, add a 13.5-tog duvet of the same type (from £185) for an Arctic-ready 24 tog in total.

+Suitable for all seasons

Looking for down-filled value for money? This conjoinable duvet set has it. Again, this set has a 10.5 tog duvet for autumn and winter, and a 4.5 tog duvet for su-hummer nii-iiiiiiights, all in one affordable package. You'll never need to buy another. Popper the two together and you have 15 togs, for really bitter nights.

With a mix of anti-allergenic and machine washable down and feathers, this Downland duvet promises you a good night’s sleep for many years to come, for not a great deal of money.

If you’re an efficient shopper who loves a bargain, try this 'bed set' from Silentnight. With pillows and mattress topper included, one click of the buy button nets you everything you need for your bed, or when mates come to stay.

With a tog of 10.5, the Silentnight 10.5 Tog Complete Bed Set sits perfectly in the middle of the spectrum, making it a good year-rounder for the average British temperature. Reviewers see it as an ideal spare room duvet.

A great duvet for allergy sufferers

Woolroom's duvets are, as the name suggests, stuffed with a wool-based filling. The headline claim for the brand's bedding (it also does pillows and bed linen) is that wool is 'proven to provide a 25% better night’s sleep than other forms of bedding'.

Clearly this is not an assertion that is easy to verify, but what is undeniable is that the Woolroom Deluxe Medium duvet, far from being too hot as you might assume, actually seems highly adept at keeping you protected from the cold, without making you too warm. That is due to another quality that wool has, which is excellent heat and moisture management. Wool is also adept at combatting toxins and allergens (unless you're allergic to wool, in which case you probably don't need us to tell you to move on).

Woolroom's products feel suitably luxurious but aren't excessively priced. We have no idea if we'd slept 25% better when using them, but they were more than a match for the comparably-priced John Lewis goose and duck down mix duvet that we usually employ.

+Filled with silk for a luxurious finish+Microfibre yet breathable

If you don’t like the idea of a feather or down duvet but want something that’s breathable, the John Lewis Perfect Natural Mulberry Silk Duvet promises to do just that. The brand describe it as beautifully soft and warm, which is thanks to several of its design innovations. Firstly, the natural silk fibres of the silkworm. Secondly, the 300-thread count cotton sateen cover, which gives it its breathability.

Reviewers find that the silk feels thinner than down but works well to regulate body temperature during those milder nights, plus it is fantastic for allergy sufferers. For a spring/summer duvet that pleases everyone, you can’t go wrong.