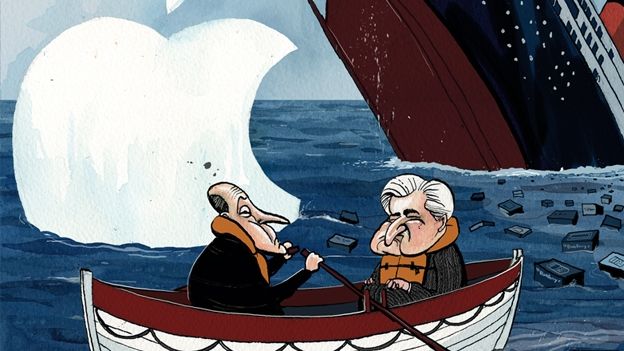 They say to truly succeed you must fail first, and even tech's sharpest business minds balls it up sometimes...

From unkind markets and insurmountable competitors to just really stupid decisions, this lot saw it all fall agonisingly through their fingers.

RIM's BlackBerry is the UK's number one smartphone by market share, but its Blighty buoyancy belies big troubles over the pond. A value loss of $70bn in three years has seen its market share dwindle, with former saviours Balsillie and Lazaridis bowing out earlier this year. But then if we'd overseen the launch of the PlayBook – in which a clustershag of mixed messages, poor support and a £10 price tag for Monopoly gave a great tablet next to no chance – we'd be getting our coats too.

At its peak, the amply proportioned German's file-sharing super-hub had 180 million registered users, accounting for four per cent of all web traffic. Yet Dotcom – who changed his surname from Schmitz and has previously racked up fines for insider trading and embezzlement – now faces up to 50 years in chokey for copyright infringement, while his site's outpipe has been forcibly blocked.

The iGod may have had a stellar second act in the play of life, but let's not forget that the late Apple founder was originally usurped from his own company by CEO John Sculley, the man he recruited from Pepsi-Cola with the immortal, “Do you want to spend the rest of your life selling sugared water, or do you want a chance to change the world?” It turned out Sculley wanted to change Jobs as well as jobs, and after a power struggle, Mr Apple was flying a pirate flag in an office dubbed “Siberia” having been stripped of Mac command.

How quickly do you reckon you could blow £160m? Plucky Swede Freer put the most ambitious estimates to shame with a business plan that managed to torch it all in just 18 months. Outgoings included a Regent Street HQ, glitzy Park Lane launch with Sting, sports cars for all the staff and industrial-sized pay packets. And for what? A portable gaming device with no games, which appeared to have been ripped from the dashboard of a Lancaster bomber.

Bartz's “These people f**ked me over” may be T3's favourite ever CEO quote, but her abrasive style and mega salary got staff's backs up, while she never got to grips with what Yahoo is actually meant to be. A bum deal with the Bing search engine was the final nail, and Chairman Bostock was soon on his way to Bartz's hotel with a heap of “bye bye” paper work. Her response – to move hotels – was the comedy cream on this tech car-crash cake.

He co-founded the company and was key to its halcyon days, but buoyed by that success, Yang turned down a $44bn buyout offer from Microsoft in 2008. With the company's current value less than half that, it was little surprise when “Captain Yahoo”, as he was rather comically called, departed two weeks after the arrival on deck of new Admiral/CEO Scott Thompson. To shareholders of ailing firms, all borrowed-time blood smells the same…

A cautionary tale from the age of the dotcom boom, the web hub and internet chat pioneer was the third most visited site at the dawn of the noughties, when Spanish comms firm Terra snapped it up in a cool $12.5bn stock swap. Four years, a billion dollars worth of advertising, a burst bubble and a South Korean buyout later and its not-so-iconic dog logo was limply wagging its tail to the tune of just $105m.

The Dreamcast, Sega's final hardware hurrah, is still discussed in hushed tones within gaming circles. Alas, such crazily before-their-time innovations as syncable, mini game-playing controllers and online multiplayer in the age of dial-up were as nought in the face of Sony's more slickly marketed PlayStation. The company behind the Mega Drive was reduced to “software publisher” status.

He masterminded the Wii's unlikely triumph so it's understandable that Iwata-san feels he knows best. Yet letting the 3DS loose in a smartphone gamer's market with a £230 price tag looked nonsensical even at the time. Humbling first-quarter sales and a drastic price cut later and Nintendo was announcing a yearly loss for the first time in its history. Iwata took a voluntary 50 per cent pay cut.

From geek legend and public enemy #1 to confused bit-part player and only the second most famous Napster founder called “Shawn”. Justin Timberlake turned former partner Sean Parker into a smooth-talking antihero in The Social Network; Fanning didn't even get a JC Chasez cameo.