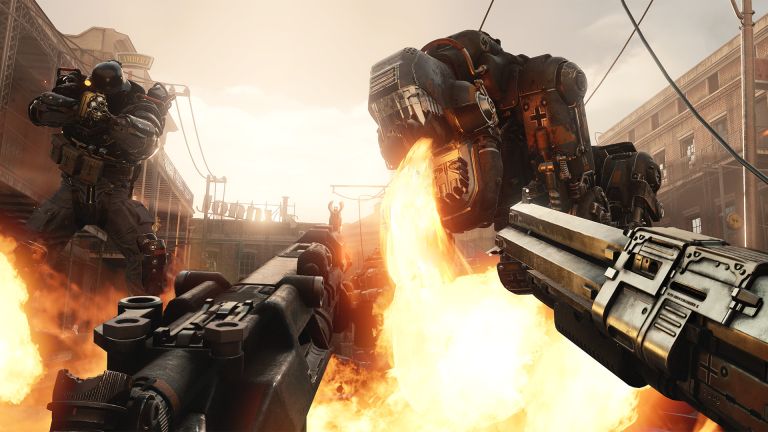 Wolfenstein II: The New Colossus releases on October 27 and, quite frankly, it looks awesome. T3 absolutely loved the grim, hyper-violent Wolfenstein: The New Order back in 2014 and, if anything, The New Colossus looks even better, expanding the alternate, retro sci-fi world in which the Nazis won World War II in a really interesting way.

As such, T3 decided to drop Senior Game Designer at MachineGames Andreas Öjerfors a quick call to talk about Wolfenstein II, as well as the attraction of alternate timeline sci-fi narratives.

If you haven't seen any of the new game though then make sure you check out the kick-ass launch trailer before getting stuck in to the interview.

T3: First up, Andreas, can you briefly describe who you are and your background in the industry?

Andreas Öjerfors: Sure, no problem. I’ve been making game for 13 years now. I remember fantasising about creating games when I was a kid, but I wasn’t daring enough to think I could ever do it for a living. For me game design has always been about creating worlds for an audience to step into. That’s still what excites me about it.

My role at MachineGames is Senior Game Designer, which means that I work on the mechanics of the game. How the weapons and enemies work, what the player can do and how the world reacts.

T3: What do you feel the attraction is with alternate timeline narratives such as that in Wolfenstein II: The New Colossus?

AÖ: We find it fascinating to consider how the US would look if the Nazis had won. The details of it – how daily life in American society would be under a Nazi tyranny. Perhaps the biggest reason why it’s so intriguing and chilling is because we know there are no guarantees that our current freedoms will last forever. Democracy is not a law of nature. We all have to be vigilant.

T3: What made you dig back into Wolfenstein's world and attempt to carry its story further?

AÖ: Well, when we worked on The New Order we hoped to get a chance to make a sequel. So we wrote a story that would work both with or without a sequel. Listen closely during the end credits and you can hear a helicopter coming back for Blazko. You can also see how The New Order deliberately set up Frau Engel as the main villain of the next game.

T3: Did Raven's 2009 Wolfenstein influence how you built the world of The New Order and The New Colossus?

AÖ: We took some story cues from it. Caroline, an important character in both The New Colossus and The New Order, comes from the 2009 game. But we moved away from the supernatural aspects that were so prevalent in Wolf 2009, and focused on retro sci-fi elements instead. Those better fit the type of stories we want to tell.

T3: Moving back onto Wolfenstein II, what new mechanics have you introduced this time around?

AÖ: We’ve worked hard on allowing players to play the game the way they want to play it. Now you can dual wield any combination of weapons, so you can create weapon combos that fit your preferred play style. You’ll also select between different “contraptions” where each one gives you different opportunities to traverse the environment and different ways to attack the enemy.

I’ll be careful with giving too much away – we want the player to be surprised throughout the game, both by the story and the gameplay.

T3: From a tech perspective we love the series' mad and far out weapons, enemies and vehicles - is this something you have had fun with?

AÖ: We love the retro sci-fi concept! Take the science fiction of the 1960’s, fuse it with the Wolfenstein series’ warped reflection of Nazism, and you get a very interesting and strange take on technology. Sometimes I think the things we have the most fun creating are also the ones players enjoy the most.

T3: If Wolfenstein II: The New Colossus was a published book, which existing title would it be closest to?

AÖ: That’s a tough one. I think it would be a pulp fiction paperback, fun and thrilling but with a dark, serious streak to it.

T3: When you're not playing Wolfenstein II: The New Colossus, which other current-generation games are you enjoying?

AÖ: I really enjoyed Prey. It managed to create a believable space station that felt like a cohesive place. I’ve also enjoyed The Long Dark quite a bit recently – a survival game set in the Canadian wilderness. It has an atmosphere filled with melancholy, an emotion games usually aren’t great at evoking.