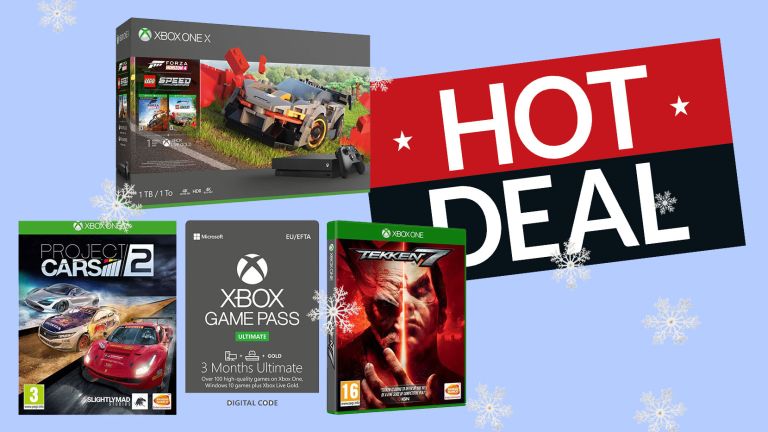 If you've just picked up a 4K TV in the Black Friday sales and want to pair the panel with a video game console that can do it justice, then this excellent Xbox One X bundle deal would be a great way to get gaming in Ultra HD. It's the perfect way to make the jump just in time for Christmas.

That's because you can pick up the 1TB version of the world's most powerful video game console along with Forza Horizon 4, Tekken 7, LEGO Speed Champions, and Project Cars 2 with a fantastic discount. At present, the console on its own is currently retailing at £449.99, but this bundle with four top games and free delivery is currently on sale for an incredible £319.00 right now over at Currys.

This sweet bundle deal from Currys is the absolute perfect way to kickstart an adventure into 4K gaming. That's because you get the world's most powerful console, the Xbox One X, along with four top games for only £319. And, what's more, you also get a free subscription for to Xbox Game Pass for three month, allowing you access to hundreds of more games to play, too. A great bundle deal, now available at Currys with free delivery.View Deal

A version of the deal without the Game Pass is available for just £299, or you can ignore the Game Pass and opt for an additional controller for £349, which is perfect for those intense Tekken bouts.

As we note in our 5-star Xbox One X review, "there's no doubting the Xbox One X's power and, when it's fed games that have been programmed to tap into that, the audio-visual experience is best-in-class." And, simply put, this deal does that, providing you with great games that with 4K, HDR, and 60FPS well and truly enabled by the X's insane power, look absolutely fantastic.

Want to pick up even more great titles to play on Xbox One? Then be sure to check out T3's authoritative best Xbox One games guide, which is loaded with fun and graphically spectacular games to play and collect.