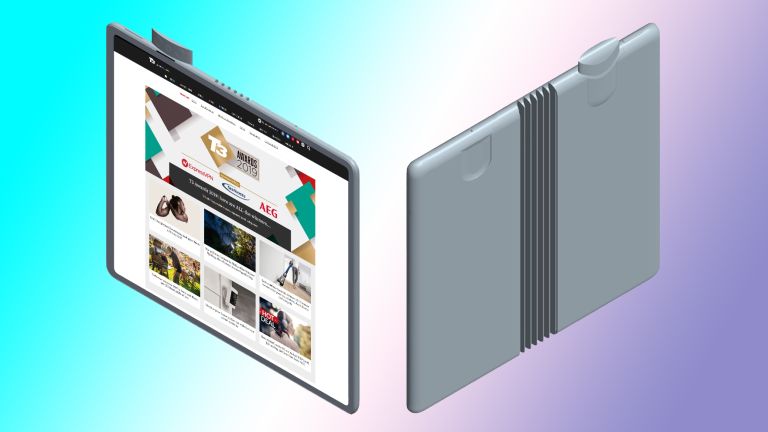 Following the launch of the Oppo Reno 5G on EE's 5G UK network last week, attention has now turned to Oppo's much-wanted foldable smartphone, which look set to become one of the most desirable foldables of the year.

Originally glimpsed at MWC 2019, the folding phone Oppo prototype looks built to take on the likes of the Huawei Mate X and Samsung Galaxy Fold, with the Oppo device looking almost identical the former albeit with a slightly larger screen.

Following this sneak peek back in February, we've seen and learned next to nothing else about the device. However, based on the design glimpsed in the latest patent, it looks like Oppo has made some interesting changes to the handset.

The latest render reveals a new pop-up camera that looks very similar to the one found on the Reno 5G. This enables Oppo to fit the handset with an all-screen design, ditching the need to include a bezel to house the selfie camera.

The new design was first spotted by Dutch tech site LetsGoDigital in a brand new Oppo patent filed at the end of 2018 by Guangdong Oppo Mobile Telecommunications to the World Intellectual Property Office (WIPO). It was published on June 7, 2019 and includes over 40 colour renders of the foldable device.

See below for a taste of what to expect from Oppo –

Looking at these patent images, the big takeaway is that this device will offer a genuine full-screen display, uninterrupted by camera lenses and, also, any sort of side bar like on the Huawei Mate X.

We can't say we're massively enamoured with the curved pop-up camera array design, which folds into a recess when the device is in phone mode, but we have to admit it makes the screen look much better in tablet mode.

We can definitely see the benefit of delivering such an expansive, fold-out display, as consuming content on a screen at least 8-inches in diameter – if not more, with no bezels and no interruptions, would help deliver a genuine tablet experience. However, with no sidebar to hold, it looks like one-handed use would be tricky and, with that pop-up array, the device doesn't look too slim, either.

Whether or not this is the design that the Oppo foldable phone eventually makes it to market remains to be seen. However, the one thing that this patent has done, if anything, is show that under display camera tech should be the ideal that folding phone makers should chase. As this way the folding devices could deliver slim ergonomics in the hand, and aesthetically pleasing screens to the eye.