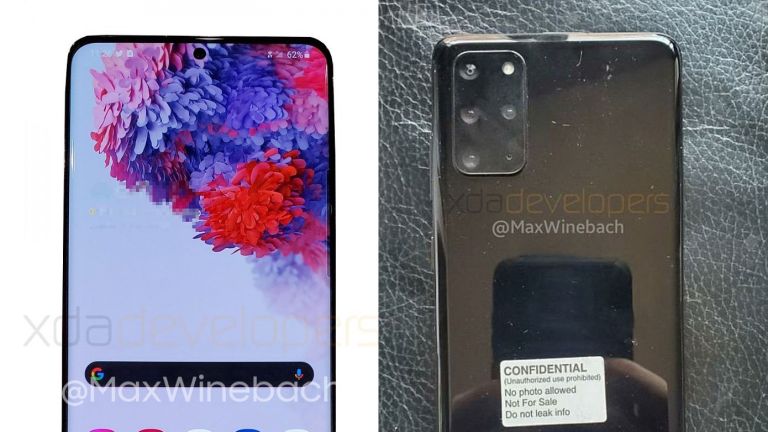 Samsung Galaxy Unpacked is nearly here. We're expecting two phones to be unveiled at the event: one, a folding clamshell said to rival the updated Motorola Razr. The other is the Samsung Galaxy S11 range (or Samsung Galaxy S20, as it's rumoured to be called), said to come in regular, Plus and Ultra models.

We've heard a lot of rumours around the latter – some thought to be more accurate than others. However, one reputable source has revealed alleged real-life photos of the Samsung Galaxy S11/S20 Plus 5G model, and it seems to confirm (and disprove) a lot of working theories around the phone.

Max Weinbach of news outlet XDA Developers has posted leaked images of a new phone to the XDA site. The Samsung Galaxy S11 Plus 5G confirms the penta-camera setup, with four rear cameras, at least one sensor and a punch-hole selfie cam. It also disproves all those rumours regarding an under-screen selfie cam in the style of the recent Oppo model.

There is a volume rocker and power button, but no dedicated "Bixby" button to summon Samsung's virtual assistant. Weinbach also notes Samsung has opted to use 2.5D glass to convey depth, rather than opting for an overly curved screen. Check out the pics in full below:

If true, the images confirm the below render which we've been seeing for the past few weeks. The image, of the Samsung Galaxy S11 Plus, includes the same penta-camera style setup as depicted in the leaked snaps above:

However, Weinbach does state this image is confirmed to be of the Samsung Galaxy S20 Plus, with the standard S20 and the upper-tier S20 Ultra as the other two models in the range. This breaks with typical Samsung naming conventions (such as the S10, S10 Plus and S10 Lite) but it's a rumour we've heard before. The "5G" suffix in the name also implies the standard model will be 4G only.

If the images are accurate, this would confirm the heavily-rumoured name change, as Samsung skips over the next nine iterations of its flagship to start 2020 with the S20. Should Samsung continue to release new phones annually under the same naming system, the numbering will keep pace with the year. It seems like a smart branding move on Samsung's part.

We'll know for sure if Samsung's adopting the new name (and if these photos are accurate) in just a few week's time.