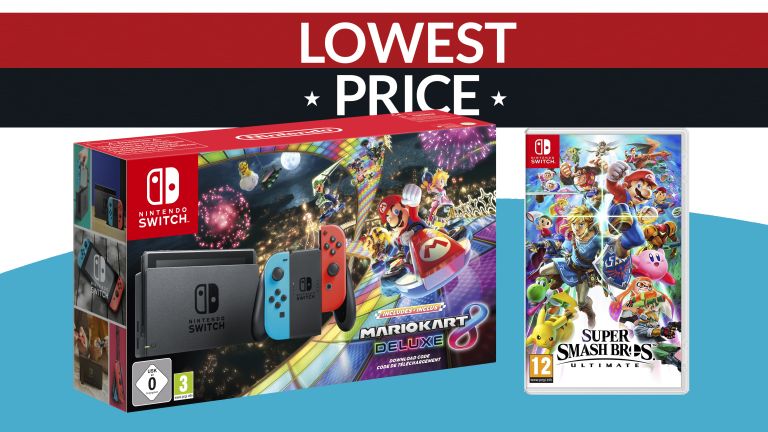 Christmas is now just a fortnight away – and if you're still hoping to land a brilliant Nintendo Switch deal, look no further than this stellar deal from Currys PC World.

This bundle is better than anything we saw unleashed for Black Friday or Cyber Monday, which is typically when you'd expect to see the console discounts. Currys PC World is including the Switch console with Neon Red and Red Blue coloured Joy Con controllers, as well as Mario Kart 8 Deluxe and Super Smash Bros. Ultimate.

It's no exaggeration to say that these are easily two of the best games available for the Nintendo Switch at the moment. In fact, Super Smash Bros. Ultimate pummelled all sales records when it launched on Friday December 7, 2018. The all-star brawler enjoyed the biggest ever Nintendo Switch game launch in the UK – beating previous records from the likes of Legend Of Zelda: Breath Of The Wild, and Super Mario Odyssey – both of which made the cut for our prestigious best Switch games list.

Less than a week after Super Smash Bros. Ultimate launched, Currys PC World is including the game in its incredible bundle for £299.

Given that the console usually sells for £279.99 with no games, it's clear that this bundle is something very special.

Best of all, you won't need anything else to start playing your new Nintendo Switch console on Christmas morning, since both Mario Kart 8 Deluxe and Super Smash Bros. Ultimate can be played in local multiplayer with a single Joy-Con controller held sideways – so there's no need to splash-out on an additional controller.

Currys PC World lets you order online and pick-up the bundle in-store minutes later, so there's no need to worry about the Switch not arriving in time for Christmas.

If you don't like the sound of either of the games included in this bundle, or would rather buy the console on its own, then it's worth taking a look at this deal from ASDA. The supermarket has slashed the price of the console itself to match the lowest price seen on Black Friday – £249. For those who can't do the maths, that's a saving of £30.99 on the typical RRP.